In an initially cryptic prologue, a young man who looks like a more well put-together Subaru approaches a fair lass who looks like a redheaded Emilia. It’s actually a very young Wilheim van Astrea meeting his future love, Theresia, but I’m sure the resemblances aren’t an accident.

Theresia may be gone and isn’t coming back, but this entire grand battle is Subaru’s attempt to prevent history from repeating itself, by protecting Emilia from her demise (and himself from Puck’s primal wrath). He couldn’t do it alone, so he called upon those with whome he shares common purpose, and the result unfolds this week.

Watching him dust himself off and craft the plan and set up the pieces made for a World Heritage List-worthy outing; and while it wasn’t really in doubt that the payoff would, er, pay off, there was also a lingering feeling that Subaru was due for another setback. This is Re:Zero, after all. Not victory comes easily, nor on the first try.

That being said, the joint Karsten/Hoshin army packs a wollop, unleashing all their best attacks and dealing serious damage to the whale, who is none to happy that the ambush tables were turned. One weapon even turns night into day, which makes the battle a lot easier to see. This isn’t ufotable-level combat, mind you, but it doesn’t need to be, and gets the job done.

After Wilhem cuts out one of the whale’s eyes (GROSS!), it unleashes a cloud of fog, and its counterattack begins. We see concern in Crusch’s expression as the sky dims, and Wil remembers telling the lovely redhead in the ruins how his sword is the only way to protect someone as a knight.

He failed in that task, but not for want of trying, and is resolute in his desire to make up for the failure by vanquishing the whale once and for all.

But the whale has more tricks up its sleeve: its fog cleaves the earth and utterly destroys a good chunk of the force. Many of the survivors succumb to the whale’s devastating, mind-piercing song, which makes them hurt themselves. Fortunately Felix is there to neutralize the effects with his healing magic.

Subaru sees that someone needs to step up and change the tune of this battle, and decides it should be him. He openly mentions Return by Death, which has the desired effect of infusing him with a fresh batch of the Witch’s stench, drawing the whale to him like a fish to a lure. 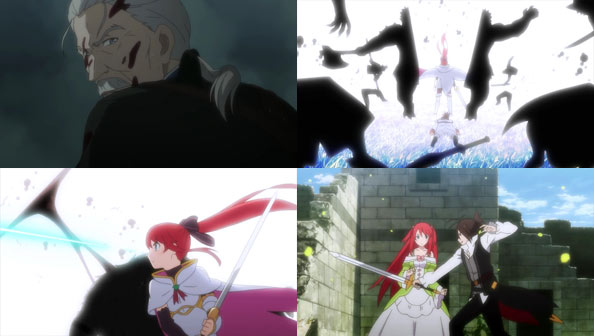 This gives Wilheim a fresh chance to do more damage to the whale, but he ends up in the wrong position at the wrong time: right in front of the whale’s mouth as it scoops the earth around him up like a cloud of shrimp.

Wil stops and recalls one last tim, the night he was saved by the Master Swordsman, who turned out to be Theresia. The fact is, he was never strong enough to protect her; instead, the reverse was the case. Even when he lashed out in frustration, Theresia proved she was the better swordsman, even if she didn’t understand why.

But Wil never got over the fact he could not protect the woman he loved, nor stop her from protecting him. He saw himself as the expendable one, and would have died happily if it meant she could live on, or even better, especially if she could then step down as Master Swordsman.

But that’s not exactly fair to Theresia, and I’m glad the show brings up the fact Wilheim’s desire for revenge, and putting himself in the literal jaws of the whale, may not have been the right thing to do, or indeed what Theresia wanted. She died to save him so he could live on. But he spent the last fourteen years living only for this day. Whether he survived this battle or died fighting, he was going to end things. And I’m not sure Theresia would approve, especially since we learn there isn’t just one white whale, but several. Talk about a Re:Zero knife twist!

What if now, Subaru has to die, plan all this out again, and the next time, include Priscilla and possibly others? I’m also weary that the Witch’s Cult will take advantage of the Karsten’s scattered, weakened army to launch their own strike. The plan was sound, it just wasn’t quite enough to end things. Will Subie be able to accomplish what Wilheim couldn’t—save the one he loves—without sacrificing himself?