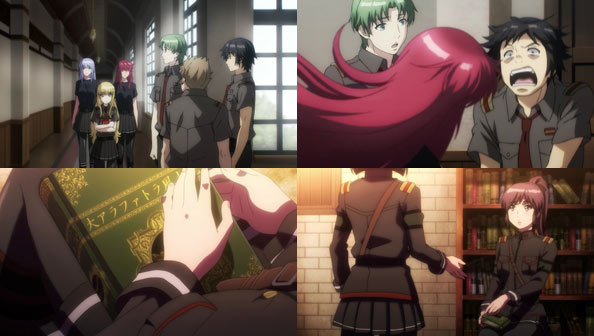 I wasn’t expecting this episode of Alderamin to match last week’s awesomely transcendent look back at how Ikta and Yatori met and became something more than friends or family. But it didn’t have to. What we got was another strong, competent outing wherein Ikta and the rest of the knights are assigned to the Northern frontier for further training with its garrison.

Before they do, Ikta reports that “Anarai’ box” is about to open, which sounds like a kind of Pandora’s box, since Anarai was his master, who defected to Katjvarna’s enemy Kioka. He also informs Torway and Matt about the possibility of wonderful, energetic girls in the Northern Region, which has the effect of lessening their weariness of going to a land of backwater “barbarians.”

He also manages to sexually harass Haroma, but Yatori keeps him in check nicely. Speaking of check, I liked how this episode opened with Matt beating Haroma at chess, but having no confidence whatsoever of beating Ikta, understanding his role as second-stringer.

When the knights/officer candidates arrive at the garrison, they are greeted by a somewhat stereotypical dottering self-important commander who clearly does not impress Ikta. In addition to Ikta and Yatori, Alderamin’s strength is its dialogue, both spoken and unspoken.

While at the banquet celebrating the arrival of the fresh troops, Ikta meets his new direct CO Senpa Sazaluf, who seems like someone smart enough to give Ikta leeway, but in return gets to say things like ‘you don’t look like a knight…but [Remion] does’, as Remion, much to Ikta’s chagrin, is surrounded by pretty young women without haing to say a word.

Just as the handsome young marksman is quickly beset by admirers, Yatori is almost immediately challenged to a duel by the biggest badass in the garrison, who knows the Igsem name well. After asking proper permission, Yatori graciously accepts, but only uses one of the two wooden swords the cavalryman tosses her. 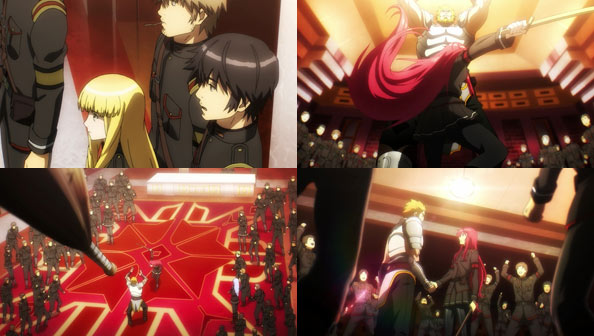 The Igsem two-sword style, you see, is for multiple opponents at once. One opponent, one blade. The big dude bristles at her perceived presumptuousness, but it’s really he who is being cocky. The princess laments Yatori having to demonstrate her skill as everyone gawks, but Ikta corrects her: that’s exactly what the Igsem style is all about.

Only the Igsems have leave from the emperor to pursue their two-sword style, as long as they never lose a duel. That power and prestige creates it’s fair share of would-be rivals like the armored gentleman here. But all he’s doing is giving Yatori another chance to demonstrate the invincibility of her house and its style.

That has the effect of both discouraging the less committed among their rivals, but also motivates a few to becoming stronger and stronger, that they may one day challenge Igsem properly. They project an invincibility others in the empire seek to match, and the emperor reaps the rewards.

Ikta wants Chamille to understand that Yatori fights and wins and does her duty because she believes the princess will do hers. Whatever reservations about her blood Chamille may have, the Igsems only exist because of it. 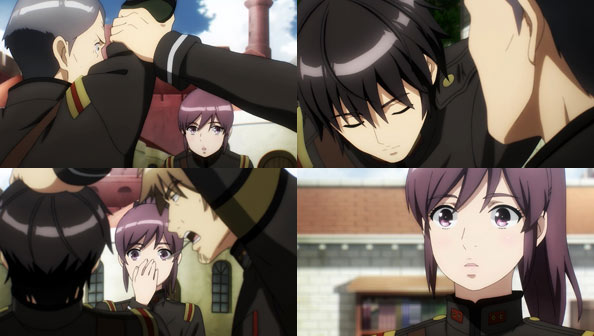 If you don’t like watching Igsem prove she’s the strongest or Ikta prove he’s the cleverest, this just isn’t your kinda show, but I’m fine with it, especially now that I’ve glimpsed their past together. These guys are special, which means they both get a degree of independence not afforded other soldiers of their rank; there’s also the whole knighthood and rescuing-the-princess business that has made them famous.

Yet Ikta, unlike Yatori, is not constantly hassled by those seeking to observe his not inconsiderable talents. Igsem is to Yatori as Anarai is to Ikta, but much of the emprie considers his beloved master a traitor and blasphemer. But just as Yatori carries the mantle of invincibility, Ikta is a stealthy preacher of Anarai’s Science, and it almost always comes in handy against less sophisticated minds.

Enter the officer trying to confiscate all of Private Kanna Temari’s beloved books, including one written by that Bad Man Anarai. Not only does Ikta swoop in to stop him from striking Kanna, he also exposes his plan to sell the books for a tidy profit. He also uses knowledge from Anarai’s book—one of Kanna’s most prized, which he’s probably read many times—to neutralize the aggressive officer via giant spider.

Kanna is suitably impressed, and Ikta shows what a charmer he can be. Unlike Torway, Ikta has to seek out girls, and he needs an in. This time, that in isn’t that he slept with the girl’s mother (that would be quite a coincidence!), but that even if Kanna doesn’t know it (or want it to be true), they are both of them students of Anarai…and of science. It will be interesting to see how their friendship progresses.

Of course, we’ll see if it ever does progress, because the episode builds to a kind of crescendo of mysteries and threats at the end. Sazaluf doesn’t have much choice but to jail Ikta to save face for his blatant failure to report for duty, but Ikta runs off and uses his spirit to shed light on…something that causes him a degree of concern.

We then cut to one of the Sinack villages in the mountains, where a charismatic young lady named Nanaku Daru is poised to start a fresh offensive against the imperialist intruders who have stolen half of their land, as well as the Hahashiku, probably the artifact (or person) Ikta discovered in the dungeon.

A fight is clearly coming, but I have the utmost confidence in Ikta, Yatori, and their comrades to defend the empire.