After making me care about the “bad guys” a bit last week, Delta continued to impress by suddenly having Freyja and Mikumo kinda go off the rails, resulting in the destruction of the Protoculture ruins—and thus a pillar of the Starwind Sector—on a large scale, and sending Hayate into superhuman berserk mode, from which he still hasn’t recovered when we check in this week. Mikumo has been secured aboard a medical frigate.

While both waiting outside the door to Hayate’s hospital room, Freyja and Mirage encounter the dude in the keffiyeh who was so dispassionately reporting on the status of the ruins and Protoculture structures back in Windermere. In a time of great doubt and apprehension, he’s arrived to complete an undisclosed business transaction with Chaos. 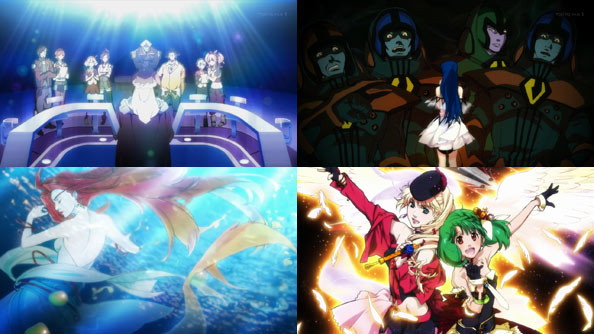 But…he goes into an incredibly long-winded and detailed bout of exposition that not only serves as a shout-out to all previous Macross series (of which I’ve only watched Frontier, back when it aired), but connects the events of all of those Macrosses to explain what’s happening with the Wind Singer, Walkure, Freyja, and Mikumo.

Long story short: the Var is a product of fold bacteria left behind by the Vajra, and there are people with immunity to the Var and fold receptors who generate powerful bio-fold waves when they sing while their lives are on the line.

Berger Stone surmises that the Protoculture inserted some code related to music in the he DNA of all humanoids, and that music is more than just culture shock, but a mind-controlling weapon.

He also brings up rumors of the mysterious “Lady M” who finances Chaos to be developing an “ultimate weapon” utilizing music, which sounds a hell of a lot like Mikumo, considering the flashes of her past we’ve seen.

I’m glad to be caught up on exactly what’s going on, but I can’t help but wonder if there could have been a more organic way to convey all this information. When you think about it, why is Berger Stone telling them all this to begin with? Frankly, the only reason I can think of is that the plot requires that he do so.

Sure, it’s a vehicle for a bunch of lovely nostalgia, but this is where my limited exposure to the Macross universe is exposed, since most of the shout outs failed to resonate simply because I haven’t watched everything. Thus, much of Berger’s story feels more like a quick cram session of everything that led up to the current situation.

It’s more than a little awkward and rushed, not to mention static. With a few excellently-executed exceptions, there’s usually something unsatisfying about watching people stand around and listen to a guy talk while watching what amounts to a fancy PowerPoint presentation behind him…for almost an entire episode.

And while Berger is talking to Walkure and Delta, Lloyd is telling Keith basically the same story. So everyone on the show is simply standing around chilling. That lack of immediacy after so much action and upheaval was a bit deflating. It felt retconny. felt…recappy.

What earns this episode a 7 as opposed to a 6, then, is the very end, when it’s Mirage, not Freyja, who musters up the courage to go see Hayate. Since there’s every indication he’s out cold, Mirage is able to be honest with herself, if only briefly.

Admitting you don’t understand anything is the first step to rectifying that, and Mirage does so, while also admitting she likes having Hayate around and wants him to wake up and be with her again. Seto Asami does good work in Mirage’s small but significant scene. Naturally, it’s left up to interpretation how long Hayate was conscious and listening to her, but it’s not as if she confessed her love or anything.

That being said, it’s important that Mirage visited him and was there when he woke up, not Freyja, as Freyja’s fear her music is a weapon that can change and potentially hurt Hayate leads her to keep her distance. Mirage is just Hayate’s flying buddy; she has no such misplaced guilt to contend with.