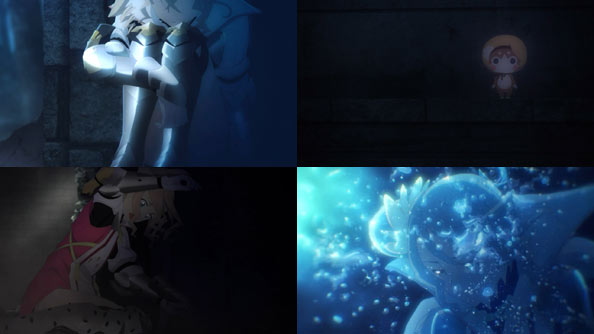 (Disclaimer: I have never played any of the Tales games; my RPG experience is limited to Final Fantasy and Skyrim. Therefore I have no knowledge of Zestiria, its story or its characters.)

Last week’s prologue started relatively upbeat but grew very dark and sinister and apocalyptic very quickly. This week’s episode isn’t quite done torturing Princess Alisha, who faces grief, loneliness, a sea of bugs (which a cute little familiar she apparently can’t sense tries to help keep away), and then upside-down water she drops out of, as if passing from one world to another.

I love the Alice in Wonderland sense of awe and, well, wonder in Zestiria’s many imposingly beautiful-vista money shots. Alisha gets a brief respite on a sunlit grassy cliff beside a dramatic waterfall. She inadvertently activates a pillar that reveals an entrance to another ruin behind that waterfall, and her lonely quest continues. 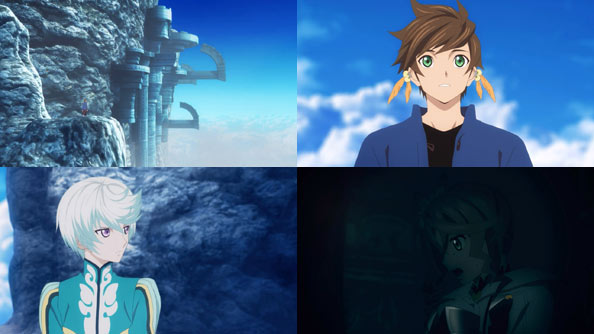 Meanwhile, good friends Sorey and Mikleo have a hobby much like Alisha and her friends of yore: exploring and investigating ruins. On this day they discover what they believe to be the mythical capital of Seraphim, breathtakingly perched off the face of a mountain. At this point, it’s pretty clear these two and Alisha are on opposite sides of this ruin, and will ultimately meet at some point.

The thing is, Mikleo isn’t human, and Sorey a human raised by Mikleo’s kind, while Alisha is human. That doesn’t stop Sorey from having the same book Alisha has, and the same thirst for ancient knowledge about the Seraphim who foster him. 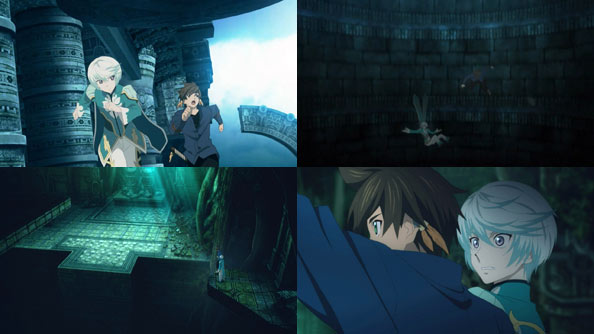 Their aged master warned them not to stray too far into the ruins, but curiosity gets the best of the lads, who end up being attacked by lightning that seems to be summoned by the ruins themselves as a defense system. But their only escape from the lightning is to go inside the ruins, where a platform Alisha was standing on was obliterated by the same lightning.

The ruin is a great RPG-style dungeon with multiple levels, obstacles, and hidden paths that are revealed with Mikleo’s magic. As predicted, Sorey and Mikleo do spot an unconscious Alisha and Sorey rushes to help, against Mikleo’s warnings to stay away from humans.

When Ali comes to, her first question is whether Sorey is “The Shepherd,” and with that, the party swells to three, and she’s not alone anymore. But it’s also clear she’s far she was in the smoke-and-flame-wreathed prologue, down (or up) the proverbial rabbit hole; a stranger in a strange land; etc.

I’m eager to see who she fares here, with the two who will become her quest companions, as well as the assembling of the rest of the colorful party we see in the OP and ED. So far, it’s a fun, gorgeous, richly-detailed show that is still managing not to bury me in lore or jargon.