Seven years after his family is killed in a mob power struggle, Avilio returns to the town of Lawless, reuniting with his friend Colteo to sell his quality moonshine to discriminating customers on the “Island.”

They end up facing the Orco family’s new attack dog Fango, but manage to escape with their would-be-buyer, who turns out to be Nero Vanetti, the son of the man who killed Avilio’s family.

91 Days wastes no time establishing Avilo’s backstory and resultant vendetta, and the title leaves no doubt as to how long he’ll have to get his vengeance. 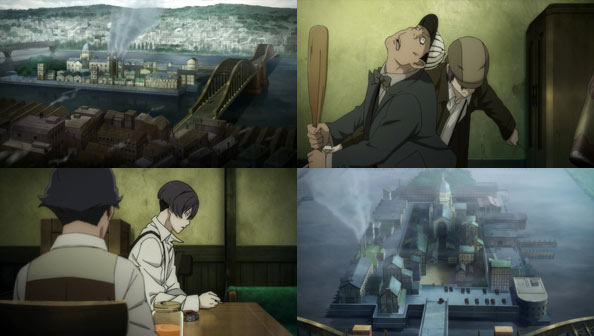 What might be lacking in complexity or surprise in the story is made up for by 91 Days’ rich, detailed, earthy prohibition-era setting. There’s a pall of melancholy and fallen grace everywhere, no more overt than a church on an island converted to a bar.

Unlike GANGSTA, this is a show that sticks to realism; no magical super-beings here, just good old-fashioned blood, brawn, sweat, and smoke. The weapons are bats, bullets, but exclusively knives in the case of Avilio, who has clearly been honing his mind and body for this quest for revenge thes last seven years.

Even a wild dog like Fango doesn’t faze Avilio when the guy interrupts his negotiations. In fact, he uses it as an opportunity to show his worth to some people who seem important, and turn out to be the very people he wants to get close to.

Avilio is a man with nothing to lose, since he already lost it all, so he’s no someone you want to bet against. That being said, there isn’t much else to his character, at least not yet in this first episode. His childhood pal Colteo welcomes him back in his life, but I wonder how long he’ll last, as he’s not as hard or strong as Avilio has become.

Where the originality comes into play is Colteo’s mad distillery science, and the decisive blow to Fango is a chemical reaction that harkens to seven years ago, the night Avilio’s fam was murdered, when then-Angelo put out a candle with his finger, showing it was the paraffin burning.

Colteo hoped to make money off his quality hooch so he could go to school, but now that he’s swept up in Avilio’s plans, that’s probably not going to happen.

For all the looming stone buildings and iron bridges in Lawless, There’s a distinct sense of impermanence to 91 Days. Avilio probably doesn’t want to be on this earth any longer than he needs to take care of business, and he probably won’t be. I’m looking forward to seeing how he uses his 91 days.