Much like the way Kariu fell on her ankle, things have gotten very awkward between her and Honoka post-spraining. Kariu has elected to keep her distance, partly because she’s ashamed for what she said to her friend. Honoka sits with Hishiro, who instantly notices she’s looking “uglier” (due to the crying).

Inukai hates to see Honoka like this, wants to force Kariu to apologize; the more diplomatic Asaji holds him back. When two people on ReLIFEare out of balance, everyone is affected adversely. The question is, what to do about it?

Someone I didn’t mention above is Kaizaki, who all but sat out last week, and is paying the price for not being more attuned to things. He knows something’s up with Kariu, however, and thinks the best thing for it is to leave Oga alone with her and let youth do the rest.

In addition to placating Oga x Kariu shippers, Kaizaki also taps into Oga’s chivilrous nature, sticking around specifically to help Kariu walk home, and not leaving even when she yells at him. She’s not surrendering to his kindness here so much as cutting him some slack. It’s difficult and scary to be honest with one’s feelings, and the truth is she does appreciate Oga. 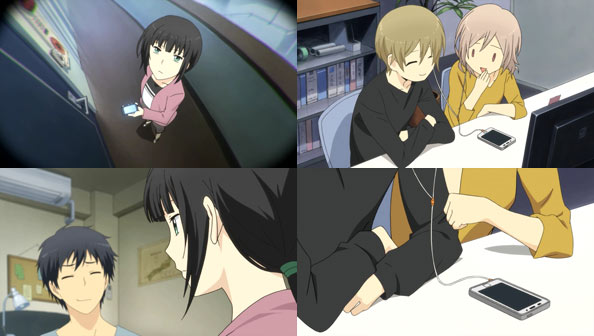 Two really great things about ReLIFE: it always finds ways to involve characters who aren’t in the present spotlight. Take Kaizaki and Hishiro, united in their need to figure out what’s up with their friends and what to do about it. Or take Yoake and An, who monitor Kaizaki’s talk with Hishiro. An grows closer and closer to Yoake as the conversation grows more personal and, well, dark.

The fact is, both Hishiro and Kaizaki ended up heeding peers’ demands they stay out of a bullying situation. Hishiro’s friend left school; Kaizaki’s senpai…well, it sure looks like something awful happened that scarred Kaizaki emotionally. Suicide, I’m guessing.

In any case, the discussion triggers that memory, and for a moment Kaizaki mistakes Hishiro for his poor doomed senpai, and embraces her tightly. Before he does, Hishiro is very concerned for Kaizaki, and comes this close to touching his face before he hugs her.

True to character, Hishiro doesn’t freak out by the close contact. On the contrary, I daresay she probably enjoyed it, as yet another step toward growing closer to others. But she’s not going to sit back and let what happened to her friend and Kaizaki’s senpai happen again. She wants “revenge”, against the mistakes of her own past self.

Neither she nor Kaizaki would have been able to act were it not for each other and their united front. Taking that next step to actively help your friends, without being asked or even when they specifically tell you not to do anything, is scary as well. They’re essentially each other’s courage.

In an interesting assist by Inukai, he tracks down Kariu and brings her to the closed door of the locker room where Honoka is talking with Hishiro and Kaizaki. The first thing Kariu hears shocks her, but not so much me: Honoka never wanted to play volleyball to begin with.

Next episode: Kariu/Honoka flashback! Till then, glad to see Kaizaki’s finger back on the pulse of things, and working so well with Hishiro. It’s been a joy watching these two grow as friends—and as people—side by side.