Asterisk War’s 24th episode wraps up the Liseltania/Assassin mini-arc, then sets up all of the new storylines and characters who will populate a likely third season. In that regard, it’s a combination of a wrap-up and stringing-along episode.

I decided to stick with AW for 24 episodes mostly because I dug the Rasmus Faber soundtrack, and I’ll admit that most of the less squeaky characters have grown on me.

Ayato remains as stubbornly dull as wallpaper paste, but he’s got a decent harem that’s gelled nicely, and there’s clearly more story to tell that will likely be of the same quality as the two cours that preceeded it, so continuing this series will ultimately come down to my schedule and what better shows, if any, air on the same day.

But I’m getting ahead of myself! There wasn’t even a preview or announcement for a third cour at the end of this episode, so let’s focus on the second season finale. The wrap-up part turned out about as expected: Ayato wakes up, and the group works together to defeat Gustave and his imposing but ultimately not too challenging Hydra.

The battle scenes are appropriately over-the-top, if a bit too stylized for my taste, and call to mind an older, similar show that was usually a lot more balls-out with the combat, Chrome Shelled Regios. (I honestly couldn’t name many major non-cosmetic differences between Leyfon Alseif and Amagiri Ayato, by the way. ;)

Suffice it to say, Leyf–I-I mean, Ayato does his thing with Ser=Veresta, Saya does her big gun thing, Julis does her Strega flower thing, Kirin does her slick samurai thing, and Claudia does her background political thing, as her Dad was the one who hired Gustave, something he did to protect his daughter but which she never the less is pretty disappointed about. 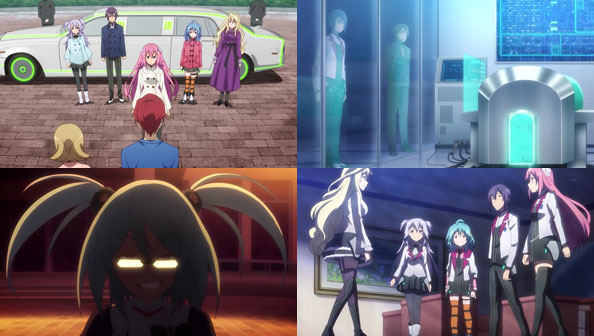 Papa Enfield wanted to keep Claudia out of the Gryps Festa, but that ain’t gonna happen, which means instead of fighting in separate two-by-two battles, our core quintet will all be on the same side against teams from the other schools.

Ayato agrees to join them after finally learning what’s become of his sister (though why she has to be nude is never explained) and he’s approached by the latest kooky mad scientist, Hilda Jane Rowlands, who is introduced far too hastily.

Combined with Julis’ continued struggle in getting her best friend Ophelia back, whatever Dirk has planned with Ernesta on his side, all of Claudia’s stuff, and that idol lady who is sure to return, there’s no shortage of material for another cour; possibly two.

While I’m weary of committing to a third season of a show that never knocked by socks off in its second, I will at least give it a look when it airs, if for no other reason, than to hear what ol’ Rasmus cooks up for the OP/ED…