Though shit was going to hit the fan immediately after Vitaly activated her  army of Evil Roombas? Nope! That doesn’t happen until five minutes into the episode.

Instead, we get more of Karen and Sakura’s concert, which consists of several slow pans over still images set to music that seems to be coming out of a handheld Dictaphone speaker. Needless to say, the shit can’t hit the fan soon enough. 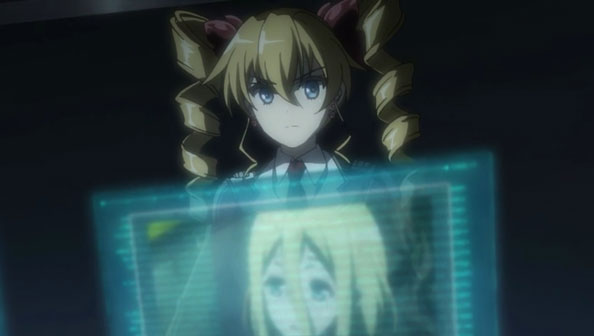 Claire is actually made aware of Wendy’s unconsciousness, short-term amnesia, and talk of coreless savages, and for a second there, one hoped that she’d lock down the entire Garden before Vitaly could accomplish too much, but…NAH. 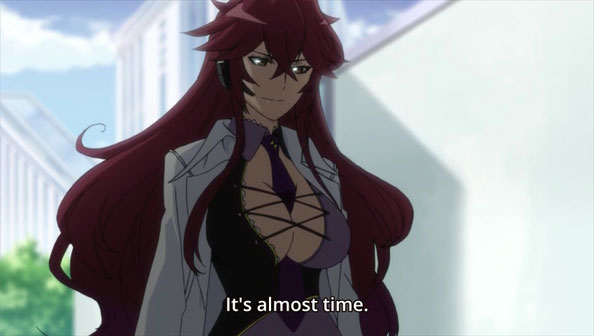 Yeah, time to go up a shirt size, AMIRITE? One thing’s for sure: VItaly knows a good villain tailor.

Anywho, when the Roombas start turning into giant robotic bees, they’re treated as a nuisance…until they turn out to be much more than that, and the Garden is literally brought to its knees.

One assumes Vitaly has been planning this multi-pronged attack since she left the Garden…which begs the question: why the heck was she allowed to roam free and buy up so many warplanes? Where’d she get the money and raw materials in a world supposedly beset by the scourge of the Savage?

I loved this: Karen and Sakura informing their crowd of 100,000 that they’re going to evacuate, but everyone else should stay right where you are! Never mind if a giant plane crashes into the stadium – The Slayers Will Protect You!

Somehow, if I were in that crowd, Sakura’s assurances wouldn’t be very comforting. I mean, she doesn’t even bother to lip-sync; she just stands or flies around smiling while the music plays? 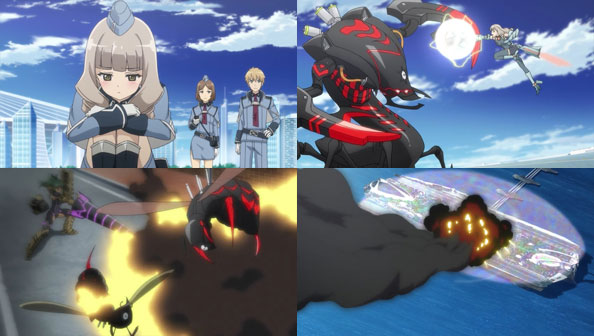 I do love Claudia’s attitude: she doesn’t care what’s happening, because she wasn’t able to share a chocolate banana with Emilia. Sure, she springs into action when Vitaly’s robots storm the flight deck, but it’s clear that she’s only attacking them because she’s less likely to hang with Emilia if Emilia’s city-ship sinks. 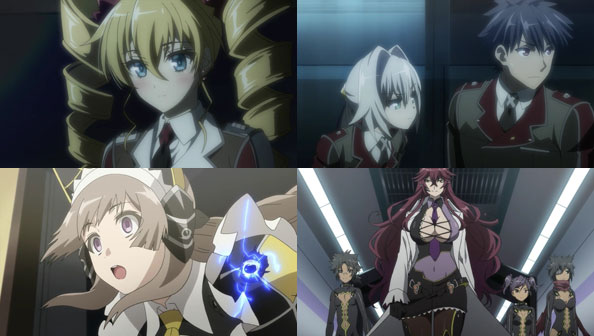 Claire orders Hayato and Emile—who are on the sidelines this entire episodefor some reason—to protect the three captive Hunters, but with the Garden’s shields failing, Hayato decides to go topside instead, and Claire lets them go, hoping Mai-Mai will suffice as prisoner guard.

She doesn’t; Vitaly takes her out without much difficulty, then activates some kind of sonic torture device that bends the three initially reluctant kids to her will. I tellya; this Vitaly is one omnipotent villain, and this episode doesn’t reveal any obvious flaws in either her plan or her many powers.

She basically made Charlotte, Claire, Judar, and Little Garden look pretty damned weak and foolish all by herself. Now that she has three obedient (for now) Hunters flanking her, stopping her is going to be a bitch. But if anyone can do it, it’s Hayato…with some help from his friends, of course.