Before he even meets him, Ikoma isn’t subtle about his reticence towards Biba-sama. But the show is willing to give him a chance in our eyes when the two do meet, because Ikoma wastes no time calling out the twisted philosophy Biba ingrained in his sister who isn’t really his sister (he just lets her call him brother).

We’ve seen a lot of sides of Mumei these past seven weeks, but one thing is for sure: being with Ikoma and Ayame and other normal humans has somewhat softened her previously hard line against all forms of weakness. She’s gone from someone with no need for a name (mumei means “anonymous”) to someone with friends who use that name as if it were Yuki or Haru-chan.

Once she’s back in her beloved brother and savior Biba’s shadow, however, she slips back into Heartless Battle Mode all too quickly. It’s a testament to how much history she has with Biba, and how carefully he molded her into a weapon. She’s not the only one, either: Biba’s force of elite Kabane fighters deal with a seven-horde raid with relative ease. 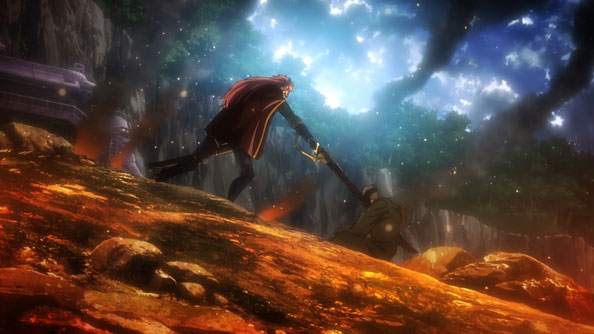 In the aftermath of the battle, Enoku seems to simultaneously threaten Biba with assassination and offer his services, one among many assassins after Biba’s life. Biba has no use for him; he’s pretty sure Enoku will betray him no matter what, and that falls under his very strict code against all forms of weakness, including treachery, so Enoku buys it.

Unfortunately for Biba, Ikoma witnessed him kill Enoku free of the context of their particular situation. All Ikoma saw was Biba killing someone calling for help. The fierce sympathy Ikoma exhibits also seems to turn Biba off, as if feeling for other people is another form of weakness to be excised.

Let’s also talk about that little smirk he gives Ayame, shall we? I’ll be honest…it kinda made my skin crawl. What villainy does that tiny grin portend?

This week confirms what was already fairly obvious: Mumei didn’t become a Kabaneri by being bitten by a Kabane; she chose to become one and let Biba infect her with the virus to make her stronger. Biba’s train has medical facilities where Mumei and other weapons of his like Horobi undergo maintenance.

He also keeps a fair number of Kabane locked in captivity, and seems quite interested in a very bizarre and in no way altruistic experiment that looks like a giant Kabane heart cage. It’s pretty clear everything he does is for one purpose: to make himself stronger and surround himself with stronger weapons in order to protect himself.

He knows exactly how much power he has over Mumei (all of it), and doesn’t hesitate for a moment in wielding it by asking her to collect Ayame’s master key. Once in Key Retrieval Mode, Mumei has no patience for Ayame’s questions, and even flashes a kunai to show she means business. It’s a chilling scene.

I shudder to think what would have transpired had Yukina not defused the situation with the boiler room key, but it’s only a temporary solution to a very very big problem: Biba’s train is right in front of Ayame’s leading the way, so in a way, Ayame and her train are already his to do with what he will.

When Ikoma senses the captive Kabane, he races to the freight car, but Biba warns Mumei they’ll have to kill him if he gets in, so Mumei is as short and hostile with Ikoma as she needs to be to keep him away. There’s certainly a part of her that feels bad for what went down with Ayame, and a part that doesn’t want her shield Ikoma to be killed needlessly. But those parts are quickly being consumed by her unswerving loyalty and obedience to her brother.

As Ikoma says to Ayame after being shooed away, Biba is “no hero.” Indeed, he’s the first legitimate human villain; not a passive, ignorant ingrate who won’t hear the likes of Ikoma out, but an active user of people and things with potentially frightening plans.

He’s more dangerous than the Kabane right now, not only because he and his warriors are so good at dispatching them, or because he has Ayame & Co. in his clutches already, but because he has such a devastatingly complete hold over Mumei.

Still, he’s not a Kabaneri (at least as far as I know), which means Mumei could actually be stronger than her brother. Deep down, she could have a better moral compass, too. She just doesn’t know it, because he has her all twisted around his little finger. The key to defeating him, which may be necessary very soon, is to break that hold.

3 thoughts on “Kabaneri of the Iron Fortress – 08”