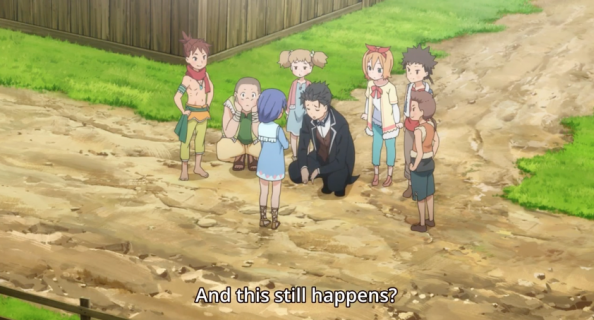 This week served a full plate of contradictions. The tasty morsels include: Subaru recounting the aspirations of each village child to compel Rem to participate; Roswaal, King of Exposition, wearing reasonable clothes and flying off without any exposition; and Rem and Emilia devouring scenes bond-strengthening with Subaru. We also finally learn the source of the curse and witness some brutal combat in the forest.

Of all shows, Re:Zero has been remarkably good at packing its plates—often skipping opening or closing credits—and even though very little narrative has actually happened, the density and emotional impact has always earned it for me. Unfortunately, parts of this episode were slow, as if intentionally dragging its feet for an unearned cliffhanger ending. Additionally, many of the slower scenes were static, and the general animation quality was noticeably lower than normal.

Focusing on the good, Re:Zero just nails Emilia’s character. She could very easily be the Perfect Nice Girl central love interest, but the fact that she really doesn’t know Subaru’s motives—that she really doesn’t understand him at all—but accepts that he’s probably a good person anyway gives her a lot of nuance.

Her best scene this week is no different: she enters mid-conversation, not even knowing what Subie has said to Ram and Rem, gets the gist, and gives him a little prayer for safety. Their back and forth is compact, simple, but full of lovely facial expressions. Seriously, just watch how her mouth subtly changes when she’s happy, exasperated, or bemused. Rem gets two solid scenes as well, and while both are much more Subaru-pushed than the scene with Emilia, they are still quite touching. Also, narratively advancing, as we learn a little more about the need for barriers to protect human settlements from the creatures of the witch, and that Subaru reveals he knows she can smell the witch on him.

I greatly appreciated how these scenes are painted as less romantic than Subaru’s scenes with Emilia. Here he has a kind word, makes a pinkie-promise, and shows his trust in Rem. It’s friendship, not harem-building, and that adds nuance to the format that easily could be about getting all the girls.

Intentional or not, the last strong scene starts and ends poorly. The animation leading up to the fight was lackluster, there was a lot of static dialogue, and we still don’t know the motives of the villain. That abruptly changes with Subie’s epic kill. Like his fight with Rem several weeks ago, this had a ‘screw you I can take a beating’ vibe that makes all of the Subie fights enjoyable to watch.

Rem’s fight was decent too, for the most part. I get the sense that it ate most of the episode’s budget and the brutality was sweet but the storyboarding was weak. Call me a grouch, but having back-to-back ‘saved by your partner’s sacrifice’ moves, plus Rem being smashed by what looked like a dodge-able earth attack, felt generic. Eye-rolling, honestly.

The uneven quality of the fight aside, Rem’s brutality is a nice contrast. Specifically, we’ve only seen this kind of slaughter from evil characters before and, that’s kind of the point with Rem.

Because this episode really works or doesn’t based on its reveals, and you will probably only enjoy it more if you’re looking at some of the details, this review has largely been spoiler-free.

Technical shortcomings aside, my biggest criticism is that for all the things I didn’t spoil, a lot wasn’t answered. As Rem says, she has a lot of questions and we better be ready to answer…and hopefully soon.