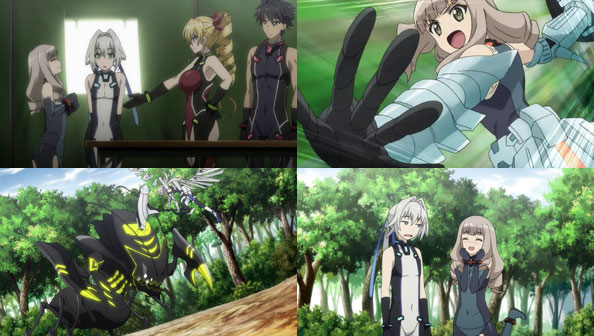 The bad news: this wasn’t a particularly mockable episode of Hundred. Why? That’s the good news: it wasn’t really that bad, as far as episodes of Hundred go. The ‘fight monsters, then fight over Hayate’ formula has been spiced up nicely by Claudia, voiced by the talented Akasaki Chinatsu, who exhibits her usual tremendous range and energy.

I’ve loved Akasaki’s work ever since Kill Me Baby! and seeing her give Emile a taste of her own medicine is never not fun. Claudia’s also a pretty capable Slayer, so it’s not like it doesn’t make sense to have her around. 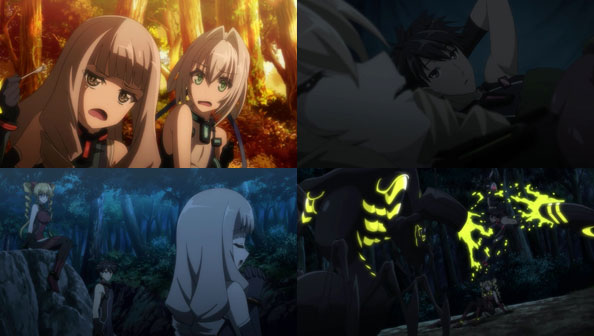 Naturally, Claudia works to separate Hayato and Emile at every turn, an urge she shares with Claire, not least because both know she’s really a girl. Claudia wants Emilia and Claire wants Hayato, but there’s no real alliance between them, which is why Claire puts both Hayato and Claudia on her team while her veep Erica is paired with Emile. 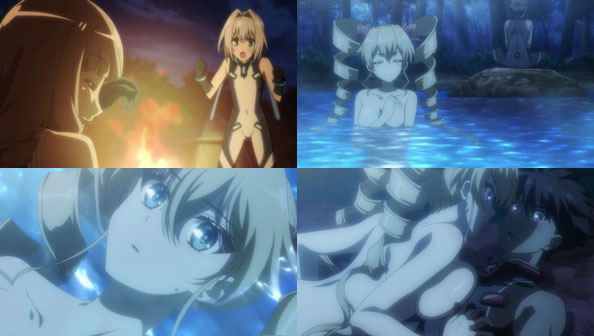 Even though the Hunters are lurking around hoping to poach savage and slayer alike, Claudia kinda drops the ball by leaving Claire and Hayato alone so she can run back to Emile. Not only is her lie about the two “going on date” inaccurate, it’s also unsuccessful, as Emile isn’t one to simply tuck tail and return to her homeland just because Claire won Round One. By that same token, Claudia isn’t about to give up on Emilia.

As for Claire and Hayato, the former slipping on some mud is enough of a reason to go skinny dipping in a hot spring. She slips again while getting out, landing naked on Hayato, but in between the moments of silliness they have a fine little chat about how both of them are fighting primarily for family, not just out of duty and honor—and how there’s nothing wrong with that. 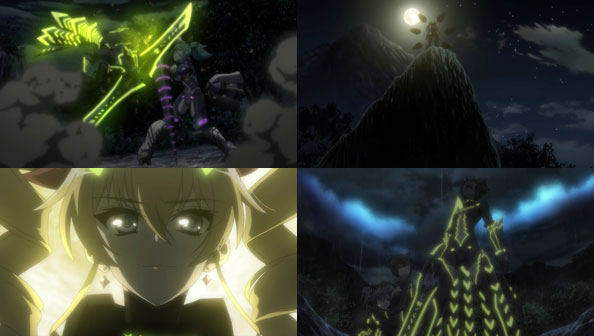 Speaking of honor, it doesn’t seem like the Hunters have much, as they start ambushing and scavenging the various slayer teams dispersed throughout the area. Claire mobilizes in her full armor to put a stop to it, but an earlier mention of heavy rain affecting beam weaponry gains significance when the heavens open up just when she’s about to dole out some beamy justice. Looks like a job for Hayato. 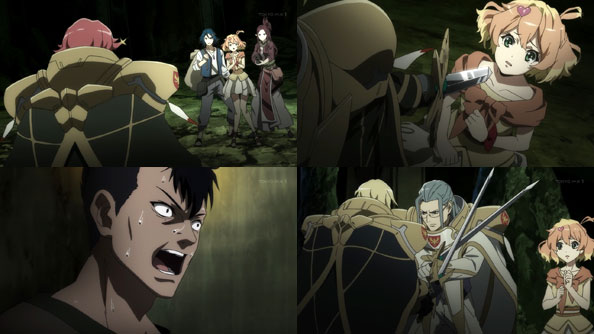 Like Kabaneri last week overcoming the Fused Colony boss, this week’s Macross Delta seems to let its heroes off a little bit easy, considering the hole they dug themselves in. I’d also question why so many high-ranking Windermereans not only end up on Vordor, but end up cornering Hayate, Mirage and Freyja…only to bascially quarrel with each other about what to do with them (kill or capture to interrogate). 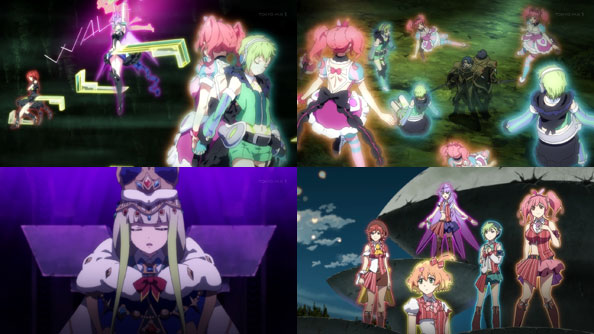 Let’s be honest here: Hayate and Mirage are no match for these guys in hand-to-hand combat. Bogue alone mopped the floor with them in the blink of an eye. And yet despite having our heroes right where they want them, the Windermereans muck it up, giving Walkure time to launch a counterattack, aided at least in part by the ruins. 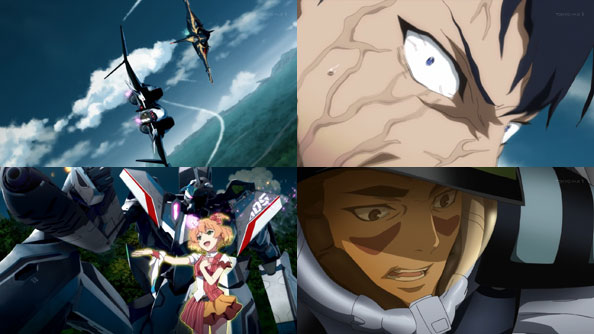 As a result, our triangle is freed, Hayate, Mirage and Messer hop aboard their Seigfrieds, and the battle moves to the air, as Walkure counters the sad wind song of Prince Heinz. That song actually infects Messer, who’s already sustained a bullet wound, and Hayate comes very close to having to kill the father of those kids he and Freyja saw (another odd coindence), but Freyja steps up to the plate and gives a solo performance that cures the pilot. 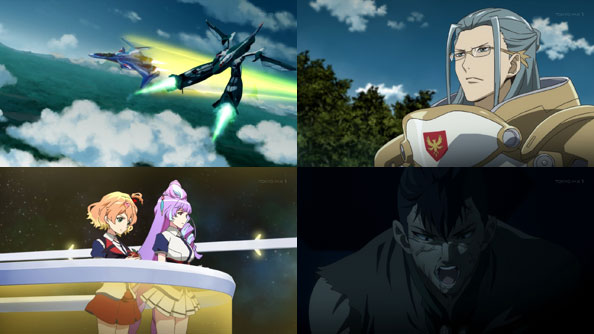 Hayate’s flying actually resonates with Freyja’s song, and he’s able to shoot Bogue out of the sky without killing him, but keeping a guy that dangerous alive is probably going to come back to bite him. Meanwhile, Lord Roid is fascinated by Freyja’s song, and will surely try to capture her again, Mikumo is both proud and impressed by Freyja’s newfound voice and reason for singing (to end wars), and Messer, poor dude, still has the Var. All in all, another serviceable but not particularly exceptional outing. 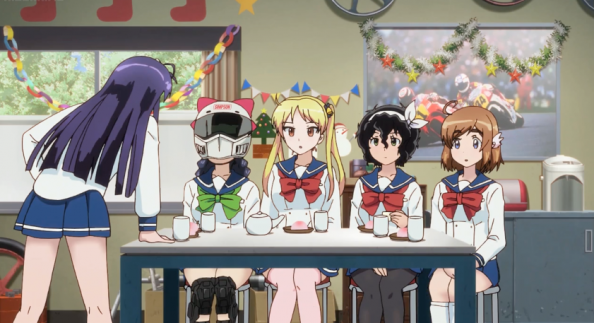 Its christmas on Bakoun is a remarkably bike-lite affair. Sure, the girls ride everywhere from start to finish, but the motorcycle-splanation is mostly contained by the first act, where Hijiri gets her first taste of non-sidecar cycling.

And honestly, focusing on the girls and their warm friendships during the cold winter season sits just fine with me. In many ways, underplaying the bikes and over playing how unnecessary they are — how unpleasant it is to start them in the cold or to ride them in cold wind — only emphasized how close our 4 ladies (and 1 ghost) have become over the last 8 episodes. 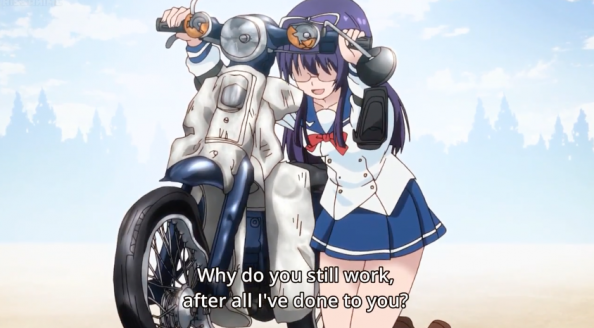 In act 1, Hijiri puts her life on the line to ride the world’s best selling bike, a simple Honda. It’s a slow, simple and rugged bike that gives workers the world over the affordable flexibly to move people and material. And since Hijiri is so green (she doesn’t even ride bicycles!) the little Honda’s durability is put to the test, crash after crash after crash.

At one point, Hijiri is so angry she gets a giant sledgehammer and goes to town, only to have the bike start anyway. It’s a cute scene, and I took it as a play on the reliability of friendship central to the riding club. 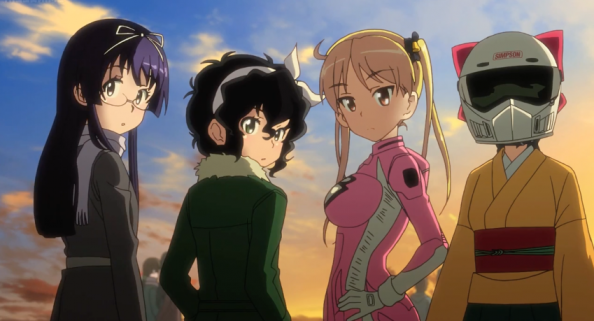 Act 2 happens around the club’s christmas party/gift exchange. Rin and Hane take center stage, with Rin being called away by her pizza delivery work and Hane being the glue of the club dressing up as santa to deliver Rin a present. Jesus also makes an appearance.

Act 3 pushes new years into the mix and ends with a frozen dash to see the first sunrise. It too is Hane focused, but this time her luck is all wrong: she’s cold and the hand warmer has failed and she lags behind the pack. 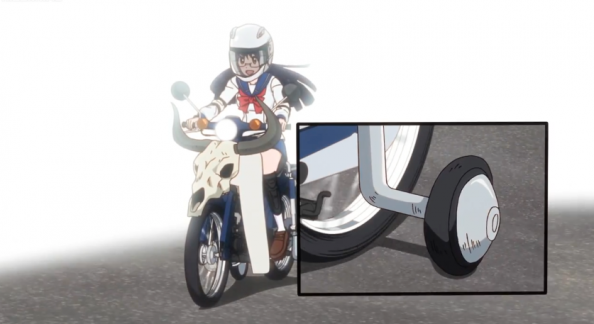 Verdict: I smiled at the puns, I basked in the friendship, I enjoyed the monster skull on Hijiri’s silly bike. Nothing spectacular happened but it was a solid, pleasant romp with the girls — and there was no exploitation to be seen.

Having gone back and rewatched the last 2 weeks that I missed, I have to say if you missed them, you didn’t miss much. (it was a 2 part school festival arc focused on the club’s costumed bike race) By far, this was much worthier of my time.