Asterisk doesn’t waste too much time getting back into the swing of things: Ayato and Julis’ next win puts them in the quarterfinals. Of course, now Ayato’s secret isn’t a secret anymore; both the physical strain of his trump card and its time limit are common knowledge among the rival schools, including Jie Long, the one that fields their latest pair of opponents, Luo and Song.

Jie Long’s pint-sized prez is excited about Ayato despite learning his potential weaknesses, to the point she warns her two students, the arrogant, smirking Li twins, that Luo and Song may not make it to the next round.

For what it’s worth, Luo and Song are neither arrogant nor smirking, but honorable fighters who lament before the match begins that they can’t fight Ayato at 100%.

The primary draw of this show (unlike RKC, which had a far better central romance) is the matches, and this latest one doesn’t disappoint, with Julis cleveing the stage in half to split Luo and Song apart so they can’t collaborate on attacks or gang up on Ayato.

It’s still a tough fight, however, so Julis executes stage two of her strategy (the firewall was stage one): suddenly switching places with Ayato without warning, throwing the opponents timing off.

Ayato and Julis strike fast and defeat Song and Luo, who are gracious in defeat but are still compelled to warn them later that the same tricks won’t work on the Li twins, Shenyun and Shenhua.

Ayato and Julis’ next match will be one of only three matches left to decide the winner. With so many episodes, I, like Julis, wonder what Ayato wants to get out of this, though she appreciates him fighting for her. His sister, for instance, is someone who’s been on the sidelines/in the shadows all this time, and is likely not really dead, so I would think she’ll come into play at some point this season.

As for the introduction of Flora…I wasn’t aware the show was starved for another cute moe character, but…sigh…here we are. That being said, like the battle and Ayato and Julis’ increasingly mature relationship, the Rasmus Faber soundtrack—including the pumping new OP and ED—continues to impress.

Our easing back into the world of Ushio to Tora seems at first like it will be a bit of a respite for Ushio, as he and Asako butt heads when passing each other in a romantic sakura-strewn street.

Then Ushio questions his default conduct towards Asako (to yell at her, feigning disinterest, and for her to yell back) when he realizes this kind of foolishness might not be able to go on for another year because for him, there might not bea next year.

So he offers, in his very Ushio-to-Asako way, to walk her home, and the two are on cloud nine—right up until Asako suddenly loses all memory of who Ushio is. So does her family. And when Ushio heads to the Kouhamei Sect HQ for help, they’ve all turned to stone. Sooo…not a rest episode, then!

Instead, it’s more of a Murphy’s Law episode, where everything bad that can happen to Ushio does happen. But even that turns out not to be 100% the case, as Tora, bless the big furry guy, remembers Ushio all to well, to Ushio’s giddy delight. You wouldn’t forget someone you’ve promised to eat one day, now would ya?

Whatever is going on, Tora’s no affected, and he suspects neither is Mayuko, who he’s always thought was a human who never feared youkai or monsters as much as she should. Mayuko has taken Kirio into her home and is showing him both simple kindnesses like a hot breakfast, and the idea that simple kindnesses need not be things that send one into a spiral of self-hatred for being unworthy of such.

Unfortunately, Ushio and Tora are a little to late to get to Mayuko. Ushio meets amnesiac Asako, who wants nothing to do with him and suspects he has no good reason to be bothering her friend. The two exchange slaps, but then things take a turn for the worse: the heads of the East and West, all amnesiacs, arrive to take Mayuko and Asako captive. Ushio and Kirio try to stop them, but they escape.

THey pursue, but Kagari and Raishin strike them down, and after dreaming of the Beast Spear shattering, Ushio wakes up in Saya’s house. She remembers him too (again, to his giddy delight) and they’re protected by her barrier from the culprits behind all the amnesia going around: memory-devouring hiyou; one of Hakumen’s latest tactics against Ushio.

Not only that, but the time-traveling Tokisaka is there. He saw the same thing Ushio dreamed—the spear being shattered—and reported it to the East/West alliance, all of whom had had their memories wiped. Thus fear and apprehension swept across the ranks, and fear is Hakumen’s most powerful weapon.

Things are bad, but there’s still plenty to hope for. Mayuko and Asako are both safe for the time being. Mayuko remembers enough of Ushio to candidly lay out the nature of the triangle she forms with him and Asako, who is starting to remember (though isn’t keen on the idea of loving a guy who loves her if it makes Mayuko cry).

Furthermore, Mayuko is confirmed (if it wasn’t already pretty clear) as a descendant of Jeimei, whose soul lives on in the spear. That means if Ushio, Tora, and Saya can’t fix the memory loss, the East/West guys may try to forge a new Beast Spear with her. It never rains…

Ace Attorney is a part-mystery, part-courtroom drama, part-comedy that wears its heart on its sleeve and shoots from the hip. It’s a super-straightforward show, with a clear and concise structure so far:

Enjoyment of this show is in the purity of that structure, as well as the delicious details. There are a lot of gags in this episode, despite it starting with a woman getting her head stoved in by a statuette.

Not all of the gags hit, but many do, and the trial moves swiftly and purposefully as Ryuuchi, backed up by his stunning boss Ayasato Chihiro, determines the key to saving his friend and client from the slammer is the murder weapon and the time it reports, which is two—really fourteen—hours off after accompanying victim to New York City.

Ryuuchi is fueled not just by the support of Chihiro, but by the memory of when Yahari was once his advocate in a classroom trial years ago. It’s never in doubt that Yahari isn’t the culprit, because we witness Yamano do the deed in the cold open.

About Yamano and the prosecution: they sure made things easy for Ryuuchi! I mean, yeah, as a rookie he still sweated when they continually countered his objections with more “facts”, but once he had something they couldn’t counter, Yamano literally explodes into somebody who isnot only a credible witness by any means, but also a highly suspicious suspect.

Being not too far removed from Food Wars, I enjoyed the battle-like fever pitch of the trial, with points and objections being fired around like projectile weapons, and gusts of wind knocking people off their feet. It’s all very absurd and fun. 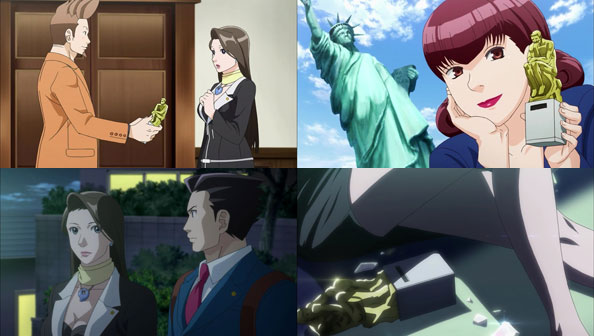 There’s also an absurdity in the sheer specificity of that darned murder weapon. I mean, how the heck did this Yahari guy have the technical wherewithal to construct not one but two talking Thinker clocks? Why The Thinker?

Why a clock? The show doesn’t really care about those details…and at the end of the day, neither do I, but it is pretty weird nonetheless, and makes me wonder what other strange, very specific objects this show can come up with.

This episode also succeeded on a introductory level, telling us everything we needed to know, but still continuing on its purposeful course of holding and resolving a murder trial, without overwhelming us with characters not pertinent to that trial.

My only “objections”? Well, the mystery isn’t all that compelling, and the show itself is pretty crude-looking, with rather stiff (if generally attractive) character design. I’m also a bit miffed they killed off Chihiro in the first episode, but I’m sure the show had it’s reasons, and I look forward to hearing its case next week…even if I can’t strongly recommend this show. 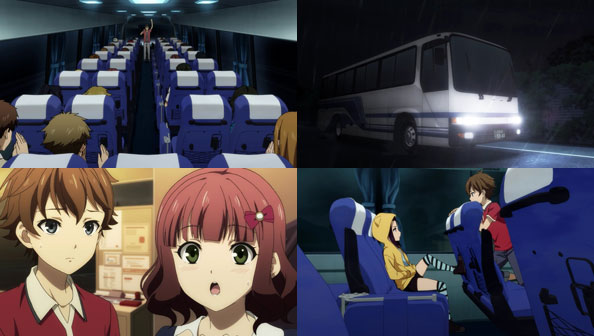 Huh…Well, that was strange. My first taste of Spring 2016 had me riding along with no less than thirty passengers in various states of sanity on a seemingly dubious”Life Do-over” bus tour to the mysterious Nanaki Village, where they’ll presumably all start their lovely new lives.

Everything is so bizarre, I was not, after one episode, able to determine whether I actually liked all this bizarreness or not…but I do know I want to learn more. 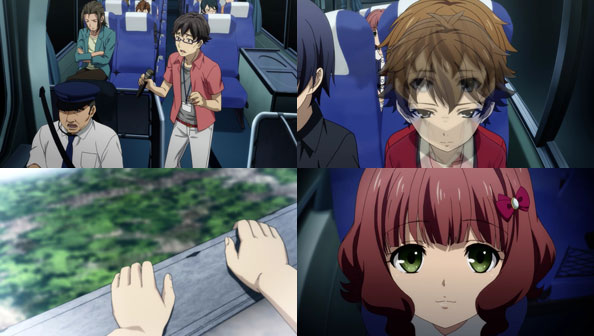 After everyone introduced themselves and their various reasons for being there (which, for many, included the various problems in their lives they’re trying to escape), the bus driver chimes in, almost as an audience surrogate, calling them nothing but a bunch of self-involved babies.

The ostensible MC Mitsumune is also intentionally normal and dull, at least on the outside; he has some very disturbing dreams that may or may not be related to his past…or his future. For all the introductions of all these people, we leave week one knowing next to nothing about them beyond their most outward personalities.

Mitsumune starts taking care of a little wounded baby bird of a young woman named Masaki, who seems to have some OCD to go along with her carsickness. Then there’s the cynical Hayato, who hasn’t come because he’s bought into what the operators are selling, but to find out the truth about Nanaki Village.

So everyone here has their reasons for being on this bus. The driver’s reason is to make some money, and his frustration with the loonies he’s transporting almost provoke him into driving the bus off the road, but he regains his senses, and after one last stop, they reach the gloomy bridge to the village where everything is supposed to happen.

This episode creates far more questions than it answers, which is almost always a good way to entice an audience to stick around to learn more, bit by bit. Pitfalls may include a vast cast of characters, none of which we may end up caring about, and the hard-to-shake sense that the show and its mysteries aren’t as clever as they want to be.

We’ll see if Mayoiga can avoid or at least minimize those pitfalls. One thing it’s clearly got down is the overall creepy gloomy atmosphere suffused with that most dreaded of elements: the unknown.