It’s not often a late-coming backstory outshines the present-day narrative it’s interrupting, but that’s what happened with GOD EATER. That being said now that we’re back in the present, everything Lenka says and does carries new weight, not that we know where he comes from. We’ve broken through his shell just as we did with Alisa.

Speaking of sisters, we also see how lucky Lindow is to still have his in Tsubaki, and the two share a nice moment in the house they grew up in. As for Alisa, she returns the team apparently none the worse for wear, but having a distinctly un-Alisa-like artificial chipper-ness to her. Was she hypnotized simply to save her from her crippling memories, for for a more sinister purpose? Probably still the latter.

But the core of this episode is the commencement of the ambitious Operation Meteorite, which involves God Eaters of all types from all over the world. While calling out the order of battle, Lindow has his sister make a slight adjustment: he’ll take the front line with Team One, while Lenka (whose God Arc isn’t quite ready yet) will monitor and command the team from the forward base camp. Lenka has proven he can lead, after all, and he’s totally fine with the arrangement.

The night before the operation starts, he has dinner with Kouta and his mom and sister’s, again driving home the family Lenka once but no longer has, and the need/desire for some kind of occasional substitute. If he couldn’t save his own family (because they saved him first), then he’ll just have to save other families, like Kouta’s or the Amamiyas. 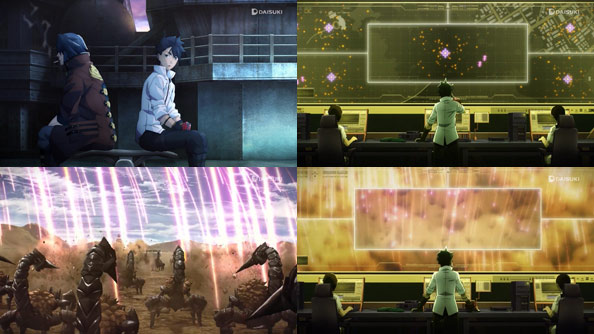 Now that Lenka knows the path he should—wishes to—walk, he feels he no longer needs the compass Lindow gave him a few years ago when they first met. But Lindow has him keep it. Even if he already knows his way, it’s up to him to give it to someone who doesn’t, just as Lindow did.

Once the battle starts, Lenka isn’t angry or restless about not joining the front lines; after all, there’s not much he can do without a God Arc. Instead, he takes instantly to command with a steady confidence and competence that’s visualized nicely by the neatly symmetrical framing of him in the CIC. As for the Meteorite weapons, they pack a impressive opening punch against the amassing Vajra-type Aragami.

Both before and during the operation, Johannes von Schicksal has had little on his mind beyond the flashback to the exceedingly difficult birth of Souma, which resulted not just in Aisha’s death, but the death of everyone in the room. Only Johannes survived the explosion of oracle cells, protect, to his surprise, by a charm which has circuitry embedded in it that repels the cells. In the present, he activates a device that has the opposite effect—luring many of the Aragami towards the dam village. Why he’s doing so, and acting without telling anyone below him, only he knows. 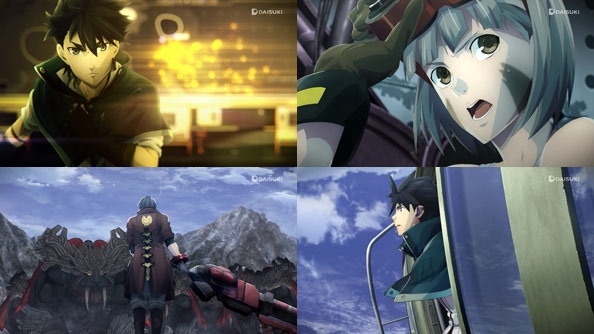 However, it may have something to do with the fact Lindow kept the town a secret. When Lindow sees where the Aragami are headed, he goes off on his own (though after getting the okay from Tsubaki and Lenka). When they lose his signal, the only God Eater who can get to him in a reasonable amount of time is, you guessed it, Lenka.

Tsubaki sends him to help Lindow, and Licca and Sakaki finish up his arc just in time to deliver it to him on the way. Now that we know where he got his short cloak from, it’s a lot more meaningful to see him don it on his very badass, purposeful way out of the CIC. Time to see what his new God Arc can do. And lurking not far away is Pita, the Aragami Alisa has sworn to kill.