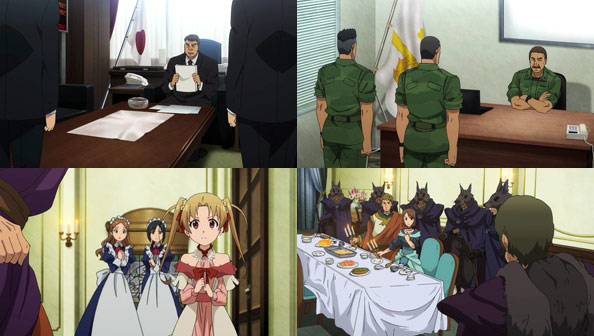 I often groan at GATE episodes that mostly or wholly omit the core gang of Itami & Co., but that’s a bit unfair, knowing that GATE is about more than just one man or one group’s adventures, but about an entire sprawling world of multiple races, political affiliations, and ideologies.

This week may have felt more like a Sherry & Casel spin-off than the GATE I typically like, but it was nonetheless a strong and surprisingly moving episode that gave the current political troubles and Japan’s involvement (or lack of same) a smaller, human scale.

Under Tyuule’s manipulation, Prince Zolzal has passed extraordinary laws and raised a paramilitary force called “Oprichnina” to oppress all pro-peace actors in the Empire. Among those is Senator Casel, who hoped to find safety with Sherry’s family, but are soon set upon by Orpichnina “Cleaners” led by the sniveling Gimlet.

Sherry leads Casel out of the house, and her parents proceed to burn it down, presumably dying in the process but covering the escape of both their family’s and country’s futures. Of course, Tyuule is on the scene and aware of Sherry and Casel’s movements, and uses her porcine assistant to get the two to “dance for her.” Not sure why Tyuule is micromanaging things to this extent, but I do know her evil smirking is getting old.

Sherry, despite being only twelve years old, doesn’t show her fear as she finds herself out in the world with people after her and an adult senator to protect. She haggles with a villager for food and secures a room at the inn, but the only way they’ll both be safe is if they can reach and gain asylum at the Jade Palace, a territory that is technically Japanese soil by treaty.

They get to the boundary of the de facto embassy easily enough, but are met by Princess Pina’s knights, who relay the Japanese diplomats are unwilling to harbor political dissidents at this time, thanks to a hard line from the ministry back home that doesn’t want to look weak or further embolden Zolzal by harboring doves. Even Sugawara, whom Sherry is in love with and truly believes she’ll marry someday, won’t let his personal feelings interfere with his diplomatic duties.

The Japanese refusal to accept Casel means as soon as Gimlet arrives with his Cleaners, they arrest the senator and prepare to take Sherry into custody too. It’s hard to watch her come so far, with so much childish faith in her shining Japanese hero, only to be turned away right before the finish line, and into the jaws of those who have already destroyed her family and likely have nothing good planned for her.

At the same time, while I despised Sugawara as much as he probably despised himself when he refused to act, I also appreciated his duty to his country. People can’t just disobey orders all the time. I thought this would all come to a heartbreaking end, with Gimlet’s grubby mitts all over an increasingly pathetic Sherry screaming for Sugawara’s help.

Turns out, Sugawara couldn’t abandon Sherry to a horrible fate. He orders her brought over to the Japanese side. This obviously led to the desirable outcome of Sherry being safe (in exchange for Sugawara promising to marry her after all when she comes of age), but GATE doesn’t pretend such an action wouldn’t have messy consequences.

There are knots and kinks in this particular fairy tale: Just as Sherry’s parents gave up their lives to get her out, Sugawara may have sacrificed his career and complicated Japan’s position to a potentially disastrous extent to save her. He did something he didn’t have the authority to do. Zolzal and Tyuule wanted nothing more than to stir the shit with Japan, and Sugawara’s heroism did just that.

The Vice Minister, who previously respected his decision as a diplomat while loathing him as a man, is forced to reverse both positions: condemn his actions as a diplomat, but laud him for being a decent man who couldn’t let the screams of a child go unheard.