The play was a sensation, sure enough, but it also awoke something in Kikuhiko; he really liked the reaction of the audience, and wants nothing more than to get that same feeling while performing his rakugo. But at the start of this week, he’s still lacking certitude and confidence, despite the fact he has his own little fan club at the cafe where he works, not to mention the persistent attention of the lovely Miyokichi, who seems to want to be someone whom he can lean on for support.

Kikuhiko’s latest interactions with Sukeroku involve a lot of the latter stumbling into their apartment late at night wasted, then laying down some uncharacteristic wisdom before passing out. By doing so, Sukeroku inadvertently reinforces Kiku’s frustration with sharing his home and his calling with someone so different from him, who found out who his rakugo was for and how to do it in a way that played to his strengths.

Kiku has had to work hard and struggle and worry his entire life, whether it was when he was struggling to dance before being “gracefully expelled” (with women lamenting he wasn’t born a woman), or struggling to discover who his rakugo is now, when it’s too late to go back, with no other way to survive but rakugo.

Just as Sukeroku sometimes voices characters who seem like him – one bad move away from a sticky end – when Kiku begins a story about a “lover’s suicide” there’s a distinctly personal and dark subtext. 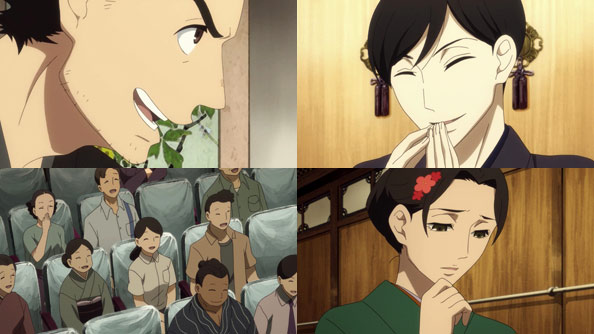 But one night, with both his fan club, Miyokichi, Sukeroku and a decent crowd watching (and already warmed up by Sukeroku’s energetic performance), Kiku finally figures it out, building on what he learned during the play, but also gaining new insights while he’s performing. As his performance changes – and improves greatly – the audience changes in turn, and he notices it.

Mind you, his method of rakugo is totally different from Sukeroku. Kiku doesn’t try to use a big booming voice. Instead, he plays to his strengths: his femininity, grace, and sex appeal. He makes the crowd laugh, but also has them feeling worried for the would-be suicidal woman, finally rewarding them for following along by releasing the tension at the end, revealing no one died after all.

In his “eureka” performance, we see glimmers of the venerable Yakumo in the young Kikuhiko, finally able to shrug off his inferiority, relax on the stage, and command a crowd with a firm but elegant touch. When he leaves the theater for home, he’s practically giddy.

As a boy he heard words of pity from those who believed he couldn’t cut it. Now, nearly everywhere he looks there are admirers eager to praise him. And this is only the beginning.