Many years ago, Noriyuki Abe wasted no time drawing me into a world where a youth named after a berry, who looked like a delinquent to many around him, actually had a very kind and generous heart. He could also see and talk to ghosts, which is how he met his first shinigami; a very cute one who sucked at drawing.

I’m talking, of course, about Bleach, my first extended foray into serialized anime. There’s a lot of that same welcoming, beckoning quality coming off his latest work Divine Gate, as well as its exploration of spirituality and mythology. It’s a hard feeling to put into words, but Active Raid didn’t have it; not for me at least. Divine Gate, like Bleach, did. 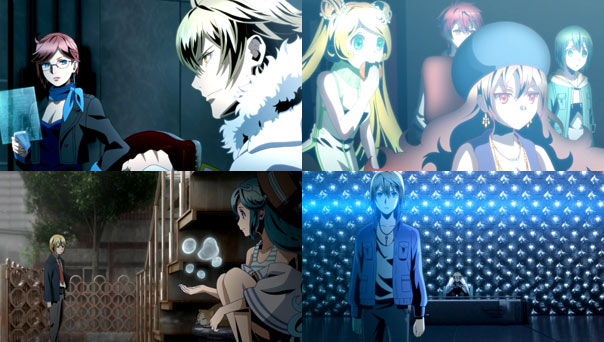 Then there’s Aoto, who’s clearly a powerful water-user, even without a power-enhancing driver, but wants nothing to do with the Council, despite Arthur’s believe his powers will help maintain peace between the three worlds. Instead of attending a school that will help him hone his powers, he’s at regular old school, where his peers shun him as the infamous “parent-killer.”

Even though most of Aoto’s early dialogue is internal (and quite flowery), the fact I can hear what he’s thinking is an effective way of drawing me into his world and his plight. He’s mopey and morose, but there are very good reasons for it.

Meanwhile, since this is a show about elements and colors, his moroseness is balanced by his would-be academy mates. Akane outwardly mocks Midori for actually believing in the titular “Divine Gate” that will grant any wish once opened with the power of all the elements, but somewhere in the heart of every student and Council member is a desire to encounter that gate, their individual wishes ready to go.

Midori and Akane meet Aoto twice, but neither encounter goes particularly well. He’s got a wall up, one they don’t—and can’t—quite understand, anymore than they understand right now how a kid could really kill his parents—which Aoto freely admits when the subject comes up (though I’m not sure he’s being truthful).

But the flashback makes it clear: Aoto was the family pariah; his parents doting on the younger son while he was exiled to a shed in the backyard eating cold food. His brother knew of his plight, but also knew Aoto had the power to do something about it, so he did nothing, instead doing whatever he wanted.

So Aoto endured a thoroughly cold and loveless upbringing. Why exactly, we don’t know. The “rain” (his tears) continues to fall unendingly inside him. He doesn’t believe power can do anything, because he’s always had it and it’s never done him any good. But perhaps, with more interaction with other perspectives and elements, those inner clouds could break one day, and he’ll find that wish to be used at the Gate.

DG effortlessly drew me into its world; it’s a place I wouldn’t mind coming back to next week. Not sure about the show’s logo, though. Tilted Impact? Really?