I’ll say one thing about No9No+No: it’s a very pretty show; far better-looking than I expected going in. Its first episode is adept at utilizing light and color to portray temperature and mood, which is with a few notable exceptions, very pleasant and upbeat, even…fluffy.

And that’s no moon, nor is it a space station: it’s the titular Norn, a giant spherical ship (kind of a “Life Star”) with a crew of ten humans, A sakura-haired maiden becomes the eleventh, delivering her from snow and solitude to a new life of adventure, mystery, and beautiful people.

The show definitely has the “retro-futuristic fantasy” aesthetic going on, blending Last Exile-style steampunk elements with Castle in the Sky-like architecture. There’s a decent sense of awe, and also a distinct “I want to be there” welcoming quality.

This is really an episode of introductions, with Pinky, who later remembers her name is probably Koharu, standing in as the audience surrogate, all wide-eyed and ready to soak it all in. We also get some cursory introductions to the other eight crew members besides her and her guide, first friend, and perhaps down the road, more, Yuiga Kakeru, who get the lion’s share of screen time.

Koharu becomes the third female member of the crew (there’s also the stoic Shiranui Nanami and more fervent, less patient Kuga Mikoto. There’s also Ichinose Senri, who initially refuses to come outside to meet Koharu, not wanting to get close to anyone since he fears they could all “become enemies” someday soon. 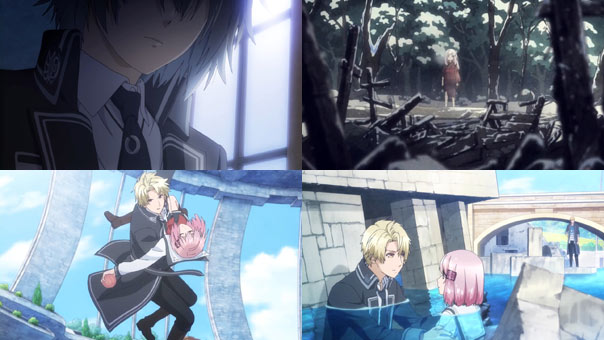 All eleven crew members have special abilities and were chosen specifically to crew the Norn, on a mission of peace sanctioned by a powerful, advanced organization called The World. We can glean that Koharu’s abilities may have been responsible for some kind of disaster in her past that separated her from her family (or killed them) and left her alone to the point she forgot her name.

But now she’s no longer alone; the other crew members ask her to rely on them, just as they’ll come to rely on her once she has her bearings (there’s a rather staged-for-romantic-benefit sequence where she falls out of a tree and nearly to her death before being saved by Kakeru).

Finally, the episode ends with a literal bang, an explosion that instantly made me recall the flames in Koharu’s memories. Perhaps her ability relates to fire in some way, and she’ll be of some use in whatever incident is afoot. I won’t mind tuning in next week to see what transpires.