This week we meet Mari’s dad Kurihara (voiced by Fujiwara Keiji), the chairman of the school, and the man who allowed boys to enroll at the school in the first place. Kurihara has a very hilarious way of speaking, ending each sentence with a dramatic pause before delivering the final words like an accusation.

At first he looks like he could potentially be a useful ally to the guys, as he insists Mari at least give them the weekends off, opening the opportunity for Kiyoshi to have his sumo date with Chiyo after all. That impression doesn’t last long, however, as Mr. Kurihara immediately becomes more a liability than an asset (he left a web page featuring “latina asses” open on his computer).

Note he doesn’t rub this in her face; she finds it out by accident. But it’s enough to anger her into giving the inmates so much work they won’t possibly get it all done by the weekend. Kiyoshi’s dreams are crushed almost as soon as he let them take hold. Then he spots an anthill, and decides no matter what, he’s breaking out.

My first thought was “okay, they’re totally getting their sentence doubled.” But this week doesn’t move too fast; instead, it delves into the difficulties of breaking out. However, Kiyoshi gets instant and powerful motivation when Chiyo herself tosses him the details of their date to him.

I’ve very glad there’s at least one girl at the school who doesn’t consider all men scum, and who is perfectly fine with Kiyoshi breaking the rules if it means she can enjoy a sumo match with him. And God, their little sumo-related (I’m guessing) “thank you” gestures are the most adorable fucking thing.

I still can’t see a scenario in which he’s able to get out without getting caught and having his sentence doubled or worse. But Chiyo makes it worth the risk. 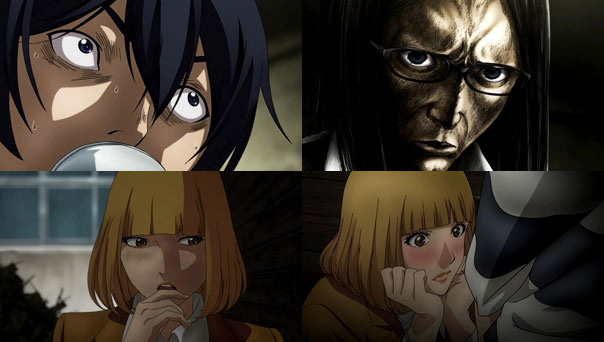 Kiyoshi has another immediate problem: Hana. Her thirst for justice, honor, and equity in all things demands that because he saw her pee (never mind how accidental that was), she gets to watch him pee. And the more she tries to make that happen, the more excited she gets, the more it seems her interest in Kiyoshi goes beyond simply balancing the scales, demonstrating that the show is interested in presenting the perversions of both sexes, not just the lads’.

There’s a lot I loved in this episode, but one scene I might consider my favorite is when Mari and her dad cross paths in the hall after school. When the book slips out of her dad’s hands and photos of butts scatter all over the floor; the looks and words that are exchanged; the dad’s final look at the camera as he finishes his lines with panache, it’s pretty much perfection, and it had me in stitches.

Once again, an easily-avoided slip-up by Mari’s dad convinces her that the inmates need even harsher treatment, resulting in Shiraki Meiko using her new riding crop with gusto on Kiyoshi and Gakuto at once, with Gakuto taking “heads” and Kiyoshi taking “tails” in the worst way.

Kiyoshi and Gakuto’s plan to destroy the shed (so they can stay near his escape route without suspicion) goes off without a hitch, but they don’t count on Hana setting up a table and chair and supervising the repairs personally. She also brings enough tea to make Kiyoshi have to go really bad, something she’s determined to be present for.

This results in the raunchiest and grossest set piece to date: when Hana gets impatient and tries to whip Kiyoshi out herself, he struggles, she trips, grabs what she can (his pants), pulls them (down), and in the commotion, Kiyoshi just…can’t…hold it in anymore. That brings us to a match cut to rival 2001’s bone-to-satellite transition—with Meiko having a most unladylike drink before hearing Hana’s scream.

By no means did Kiyoshi want to do what he did, and he’s clearly ashamed that it happened. Unlike the peeping, he had virtually no control of his role in either peeing incident. If anything, it will be that much harder for him to look at Chiyo without being subsumed by guilt, now that yet another secret he can never tell her about has come between them. Kiyoshi’s slow moral destruction continues apace…

There’s also the matter of him and Hana still not being completely even. If Hana believes in absolute, eye-for-an-eye justice, well then, she’d have to do to him what he did to her. In any case, Prison School has shown it won’t pull its punches.