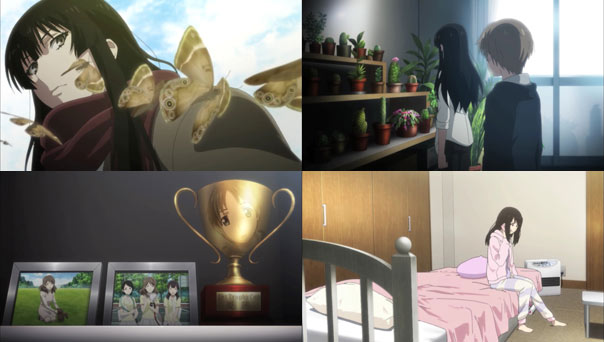 While on a bonehunt with Sakurako and Shoutarou, Isozaki-sensei gets called away by news that his former student Hitoe has disappeared. Sakurako offers to give him a lift, but is really interested in the mystery sticking with him offers. Hitoe is the second of three once-inseparable friends who were students in Isozaki’s homeroom.

Saku instantly notices how personal he’s taken the disappearance of the first and how he couldn’t bear to lose another. He also sees how he atones for not being able to do anything about the first girl who disappeared, Minami. When they visit Hitoe’s rich and haughty parents who know nothing about their daughter, Saku is disgusted, gathers all the clues she can about where Hitoe may be headed (a few days’ clothes and a phone battery away) and gets the hell out of there. 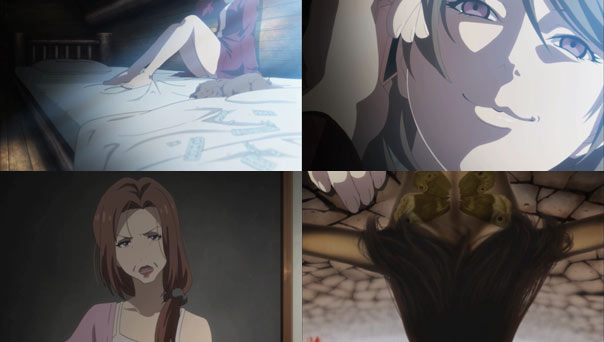 We finally see Hitoe, the girl from last week’s cold open, still in a kind of trance, or possibly drugged, with her little dog and a bed covered in bandage wrappers, talking to her “sensei” about her “wings.” Shou learns from Yuriko that Hitoe modeled for a painter and was rumored to be dating him as well. So there’s the “sensei.” (Speaking of senseis, Yuriko makes sure to apologize for her harsh words to Isozaki, now that she knows he does know what it’s like to suddenly lose someone.)

They then visit Minami’s apartment, a far more downscale affair than Hitoe’s, and Sakurako gets a lot more out of Minami’s mom, who is at least in tune with her daughter’s life than Hitoe’s mom, even if she doesn’t know the full picture. When Saku finds the painting Minami modeled for—with a butterfly on her back just like a painting Hitoe modeled for—that picture starts coming together: we have a predatory artist who lures girls in with the promise of “wings” that will take them away from their awful homes and lives. 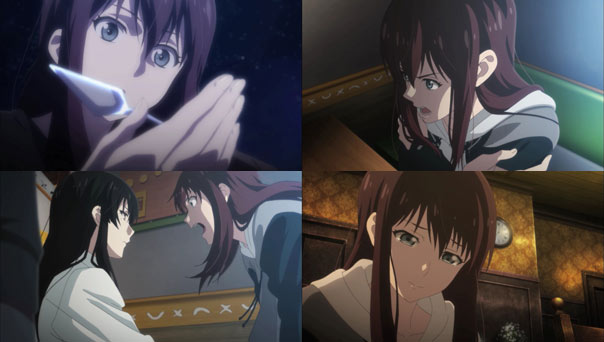 Saku finds multiple receipts for a particular restaurant (not Wagnaria) in Minami’s dustbin, and that leads them right to her, where she’s anemic, exhausted, and clearly still traumatized by what she’s been through. Still, she tries to hold onto her secrets as long as she can, though Sakurako sees through her physical tics and decides a change of venue is better.

She takes Minami into her house and has Gran fill her belly. Perhaps, when she’s ready, she’ll be able to say more about Hanabusa-sensei, the painter both she and Hitoe loved. 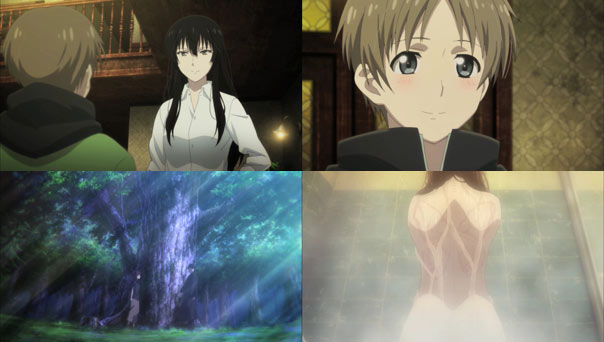 After a day when he got a good look at Sakurako’s ass when she was rummaging under Minami’s bed, Sakurako continues to surprise Shoutarou by personally inviting him for breakfast in the morning, a first for her. But in his monologue as the episode ends and we see the butterfly design etched into the showering Minami’s flesh with a painter’s knife, a future Shou recalls that while he was happy about Saku’s invitation, he had no idea at the time what her true intentions were, and the bones she truly sought.

This was another strikingly different episode from an anime that has always confidently blazed its own trail, exploring unique specific themes such as friends from different backgrounds, how friendships crumbled when they desired the same thing; the differences in their relationships with their mothers; the fact that ennui, depression, and the desire to rebel stretches across class and status.

This episode took a look into the secret world of young people most adults including their parents never see nor hear, and so may as well not exist to them; entire galaxies of hidden ideas and dreams, and one insidious little mini-cult of three, all worshiping this Hanabusa fellow who still lurks about in his coat and hat. He has much to answer for.