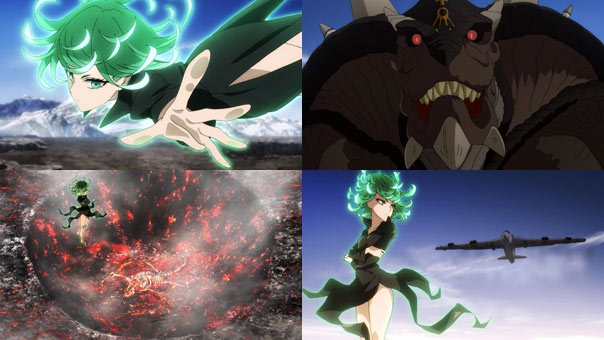 After taking out the “Lizard King”, who she dispatches far easier than one would deal with a hangnail, the tiny, green-haired Terrible Tornado is immediately picked back up by the Hero Association. We get a little whiff of her power, which seems to involve summoning whatever means are necessary to destroy her target: in this case a meteor (ironic considering her dinosauric opponent). Another superpower? Keeping her panties (if she even wears any) from being seen despite the extremely high cut of her dress! 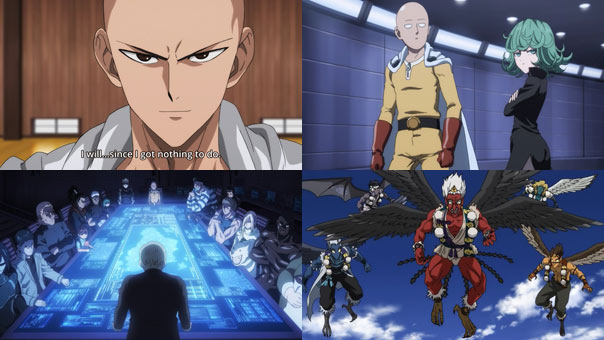 This week Saitama finally meets Tornado, who doesn’t think much of him, and probably wouldn’t even if she saw him in action. Saitama, despite being a B among S’s, was able to tag along and get involved in this high-level meeting because, well, Genos and Bang let him come, and he had nothing else to do (I guess he watered his cactus well).

The Class-S elites gathered in the war room are quite the collection of characters, including a man in a dog suit and a fat guy who keeps eating throughout the meeting (the background eating sounds were pretty funny throughout all the dramatic dialogue). Apparently, a venerable and 100% accurate fortune teller has recently died, but not before giving one final prophecy, portending “big trouble” in the next six months.

Sure enough, a swarm of tengu descend on Hero Association HQ in City A, but they’re quickly sliced in half…but not by heroes.

No, they’re killed by even more powerful enemies: aliens from outer space! In a huge, mean-looking mothership that wouldn’t look out of place in Nausicaa. The ship lays waste to City A—a more than 98% loss—but the Class S heroes work together to make sure that’s where the destruction ends. That won’t be easy, as the wounds by the swords of Atomic Samurai and his student on the ugly-looking aliens heal as quickly as they can be made. 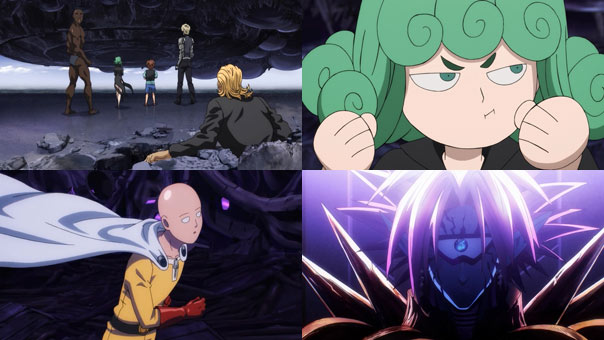 But as the heroes decide how they’re going to deal with the big alien mothership, Saitama, acting alone, burrows out of HQ, leaps up into the ship, and just starts pounding people. It’s his style: getting things done when nobody is looking, despite the close proximity of all those pairs of important, influential eyes.

Then again, the likes of Bang, #3 overall, believes he’ll soon reach the upper crust of Class S. Doing stuff like bringing down an alien mothership and defeating the cyclopic alien boss will certainly help his case. The question is, whether he’ll be able to take any credit, or once again be derided by the public as a hanger-on/fifth wheel/glory hog.