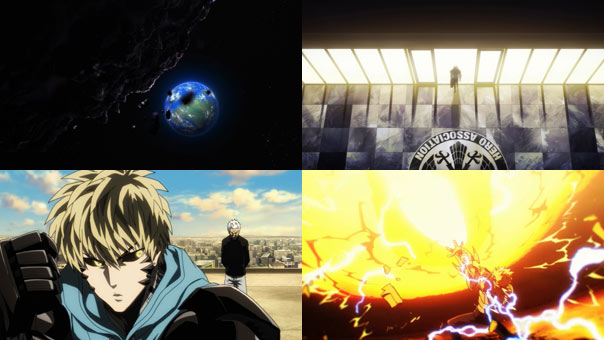 This week’s threat to the annihilation of City Z and its neighbors isn’t a villain or monster, but a meteor. Just…a meteor. Nothing fancy or ironic about it, except that it shifted course to land right in Saitama’s backyard (so to speak). This initially feels like this threat lacks the imagination of previous foes, but it offers the opportunity to see what happens when Saitama saves the city and is actually recognized for it. 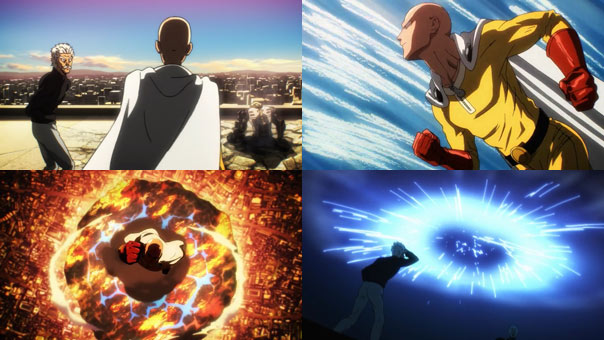 Only Genos and other Class S heroes are summoned to Z in a last-ditch effort, and only three Class S’s actually show up: Bang, Bofoi, and Genos. Third-ranked Fang’s martial arts are of no help; seventh-ranked Bofoi only sends a drone to perform a weapons test. Genos takes Fang’s advice to go all out and not worry about failure or repercussions, but he also comes up short. It falls to Saitama, who shows up randomly and blasts the meteor to bits. 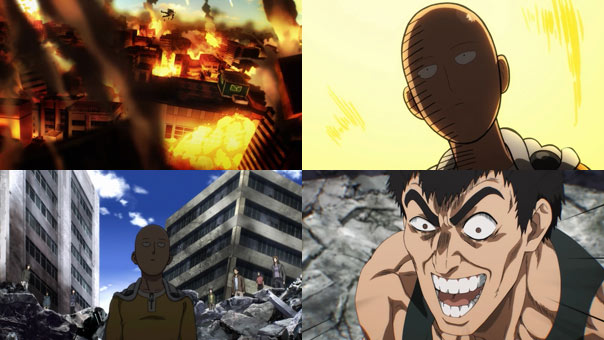 Now, Saitama has destroyed cities before, most notably in the first episode when the colossus he knocks out falls on one. But now his name is out there as the one who stopped the meteor and saved millions of lives but also the one who devastated City Z. The HA also assumes he had help from the Class S’s, so he only rises within his own Class C, albeit a healthy jump from 342nd to fifth.

Rankings aside, when heroes near and far hear of a Class C barging into a Class S matter, they’re understandably pissed, and suspect foul play. Enter the Tank Top Brothers, Tiger and Black Hole. Rather than challenge him to a fight, they start yelling abou how Saitama is responsible for all the destruction around them, gathering a crowd that turns against Saitama and starts to chant “give it up”. 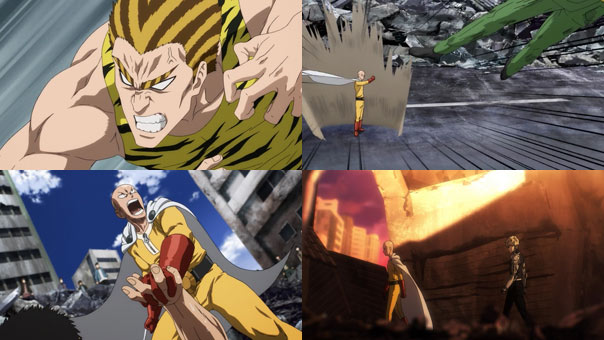 The true test of Saitama’s greatness as a hero is not in his victories over impossible foes like the meteor. Rather, it is in his ability to withstand the indignity of not only hardly ever being recognized for his efforts, but on the contrary, blamed for secondary issues, when if it weren’t for him, every man, woman, child, and building in City Z would have been toast.

Bang witnesses the Brothers turning the crowd against Saitama, but does not interfere, knowing sometimes being the bad guy in spite of being the good guy is part of the job. But the Bros’ scheme backfires when they try to put their hands on Saitama, and they very publicly show how much weaker they are.

Saitama uses the opportunity to tell the stunned crowd he’s a hero because he wants to be one, not for admiration. If they have a problem, they can either say it to his face or go to hell. It’s the first real case of Saitama, who has the clear moral high ground, addressing a good-size crowd of people directly. He probably swayed few minds, but perhaps being known and despised is preferable to not being known at all.