Shinoa has the feeling “something horrible’s about to happen” in a world with human experimentation and war with vampires, but that something doesn’t happen this week, so in the meantime, the gang trains. Specifically, with Yoichi having already achieved control and balance with his demon, Yu and Shiho’s turn to attempt to achieve “manifestation.” Once Yu passes out, it’s a waiting game for his friends. 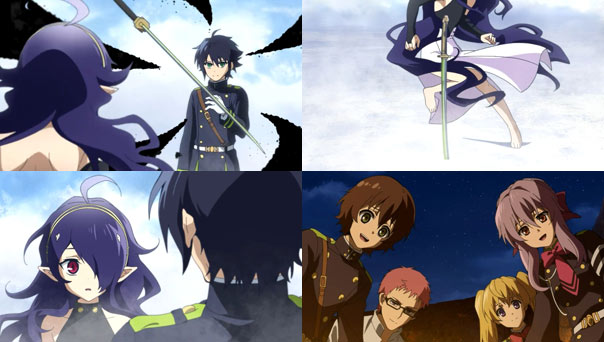 Now at the mercy of Ashuramaru, she tries to get him to break down, by first showing him a vision of his parents lamenting they created a “devil child”, the “Seraph of the End”, and his dad trying to kill him with a kitchen knife. Then she shows him the strewn bodies of the dead members of his family, who he’s told died because he ran away.

But Yu’s already been through something like this (as have we), and he’s not so easily falling for it this time. He breaks out of Ashuramaru’s illusion, and when she rushes to kill him, he tosses his sword at her, not in surrender, but in understanding: he was once alone; now he isn’t. The same is true of his demon.

He has family in Shinoa and the others. He still has Mika, who he knows wants him to save him. He asks Ashuramaru to be his blade, and in return, he’ll be her friend. She’s a bit annoyed by his new “whatever” attitude, but can’t deny his strength, and agrees to the deal. 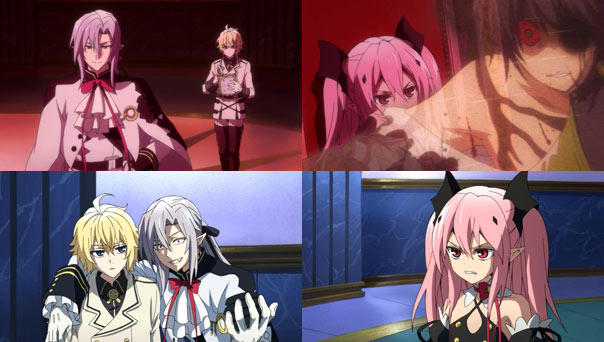 Between Yu and Shiho’s manifestation training sessions, we get a useful look back into the world of vampire politics, with Ferid parading Mikaela about and showing video evidence of Yu-as-Seraph during Kurl’s vampire conference call, making her look bad by undermining her claim she dealt with the Hyakuya clan and anyone who might’ve been the Seraph the humans could use against the vampires.

After a call that got her challenged by one of her peers and placed under a stronger microscope, Krul fumes at Ferid’s apparent insubordination. But Ferid has even more secrets, and even if she kills him, they’ll get out and ruin her. Similarly, she knows Ferid let Yu escape. So the two are bound by secrets with a pawnish Mika between them. 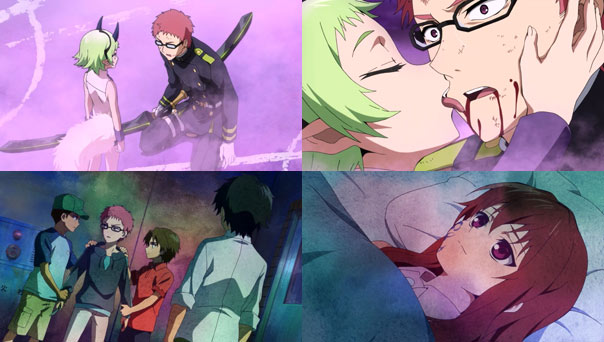 That’s a grim contrast to the bonds of mutual respect made not just between Yu and his comrades, but between wielder and demon. When it’s Shiho’s turn, his demon Kiseki-o, like Ashuramaru, thinks she’s got his number; the key to enslaving his body: his bedridden sister. In his illusion, Shiho’s friends say they have to move on to find more food, and his sister will only slow him down, they tell him to put her out of her misery. Heck, she told them to tell him.

It almost works—for about a nanosecond—then Kiseki-o makes the mistake of speaking through Shiho’s sister, all but confirming this is just an illusion; a test, and he needs to look at it that way. Just as Yu threw his sword away when Ashuramaru rushed him, he gives up the power the demon thinks he wants so bad, and will be able to move on and wield once he kills his sister, by turning the knife on himself.

The message to Kiseki-o is clear: Shiho will never see his sister as a burden. Watching how hard Yu fought to protect non-blood family, he would never forgive himself if he didn’t do all he could to protect his blood family, even at the cost of his life. It’s enough strength and conviction to convince Kiseki-o that Shiho is worthy.

When Shiho wakes up, he immediately challenges Yu to a duel, to see who’s stronger. Shinoa lets them, since they’re only playing around, but she and Mitsu are amazed how all three guys were able to achieve manifestation so (relatively) easily, leading the girls to do some digging on their pasts…only to find those pasts have been erased. Hence, something horrible’s probably about to happen, but at least they’re more prepared for it.