The first episode of OPM was going to be a tough act to follow, no matter what, so I fully expected at least a degree of regression in the second. But while that did happen, and this wasn’t nearly as good as the first episode, it was still very good, as Saitama and the young cyborg Genos join forces…or to be precise, Saitama tolerates him being around, despite not really needing anyone to fight supervillains with. 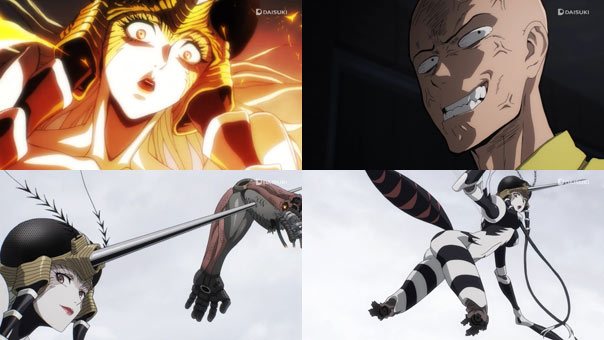 The two meet over mosquitos. While Saitama finds himself unable to kill a single mosquito buzzing around his apartment, Genos targets Mosquito Girl, the first “sexy” supervillain OPM has fielded (voiced by Sawashiro Miyuki, who is perfect for the role), who uses her giant swarm of mosquitoes to harvest blood from the living things around her, be they animals or people.

She also puts up a mean fight against Genos, as the two exchange the detachment of limbs and she sacrifices her sworm to power up and start beating Genos to a pulp, until Saitama arrives, running after a mosquito with bug spray. I know this show revels in absurdity, but I would have liked a more clever reason for Saitama to encounter Genos, and Saitama’s puns (“They sure bugged out”; “Mosquitoes suck”) fell to the floor with loud clangs.

Still, Saitama takes care of Mosquito Girl with one punch, leading Genos to want to become his disciple. Saitama invites him in for some tea once he’s repaired (apparently easy, as long as parts are available) and Genos mistakes Saitama as a fellow cyborg.

He also launches into a monologue of interminable length, which is so long and accompanied by so many still shots (though I liked the micro-story of the pillbug getting up) it stopped being funny. “Drawn-out” comedy has to be utilized sparingly and not taken too far (see a classic example here). But hey, if we were supposed to get as annoyed as Saitama, mission accomplished!

We also learn that Mosquito Girl was just one of dozens of monsters being developed at the “House of Evolution”, run by a bespectacled mad-ish scientist who has his eyes on Saitama and who induced the biggest laugh in the episode:

The scientists sends more monsters to escort Saitama to the HoE, but they predictably fail, being one-punched one after the other. He doesn’t even let the mole get away. But what’s funny about this final act is that Genos ends up in a fight with a cyborg he suspects could be the one that killed his family, but is just a gorilla trying to sound cool, while Saitama stays buried in the ground until it’s absolutely necessary to come out because it feels so nice down there.

So yeah, another entertaining episode with some genuinely funny moments, but just not quite as awesome or hilarious as the first. Which, again, is nothing to be ashamed of.