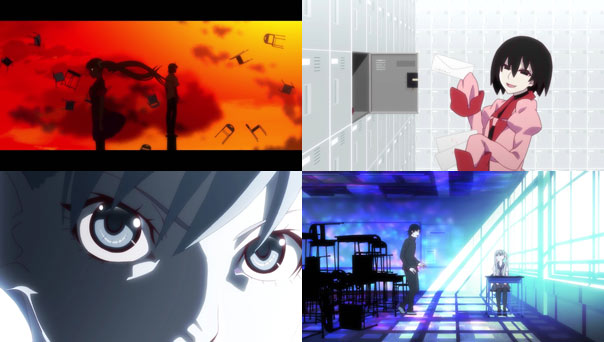 As Ougi pointedly remarks toward the end of this normal-length episode, This Is Different. Not only the fact that Owarimonogatari shifts the focus from her in the first episode (essentially an hour-long prologue) to Oikura Sodachi, who is suddenly back at school and asking Tsubasa all kinds of questions. Araragi is confident he can clear the air with Sodachi before Tsubasa gets back from the teacher’s lounge, but that doesn’t happen, because Sodachi, like Ougi before her, is different from every other woman he’s dealt with.

Different, because Sodachi hates Araragi. She despises him, and people like him with the heat of a thousand suns, as if he’d killed her parents (assuming she loved them, of course). So the smooth, easy reunion Araragi expected crashes and burns with equal force, as he can feel the hate suffusing every surface of the classroom, pushing all the desks and chairs back. No water under the bridge here. More like Sodachi wants to throw Araragi off a bridge, into that water, then burn his wretched corpse to ashes. 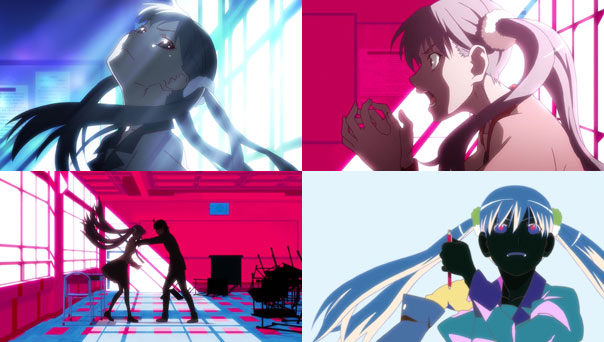 So why does she despise Araragi so much? We can hazard a guess from last week, but according to her, it’s because he’s ungrateful for the life of smooth sailing he’s enjoyed, because he’s happy without knowing why he’s happy; because he “doesn’t know what he’s made up of” in ranting that evokes chemistry more than mathematics, though the former requires quite a bit of the latter (which is why I got a “D-” in chemistry :P):

“I despise water that thinks it boiled itself on its own.”

Araragi’s usual charms and ability to take control of an encounter are utterly overthrown in Sodachi’s seething atmosphere of hate. When he tries to calm her by putting his hands on her shoulders, she quickly reaches for a mechanical pencil and stabs him in the hand. She won’t be calm. Within her is a storm that has been brewing for years. But how many, exactly—two, five, or more—is one of the mysteries this episode posits. 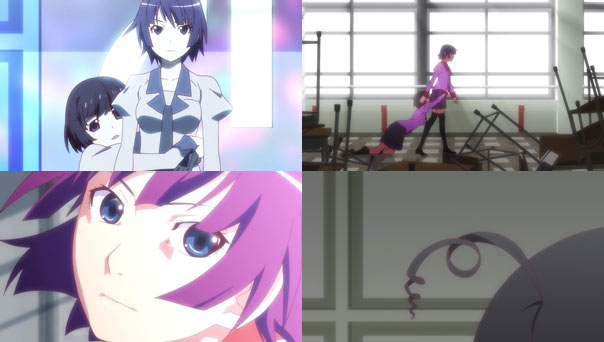 Sodachi’s stabbing of Araragi brings a new element to the equation: a highly displeased Senjougahara, comically dragging a diplomatic Tsubasa behind her, who arrives with a line that’s both eloquent, hilarious, and wink-ily meta-referential:

“I’ll kill you. I’m the only one who can stab Araragi with stationery. Even though I’ve gotten rid of that character trait, I can’t stand having it reused.”

Sodachi greets Senjougahara by lamenting “how far she’s fallen” since the time she was a sickly girl she often took care of, since she’s now dating Araragi, a man who will never credit anyone other than himself for his happiness. But both of Sodachi’s barbs imply a desire in Senjougahara for some kind of repayment for her affections or efforts, where no such desire exists. 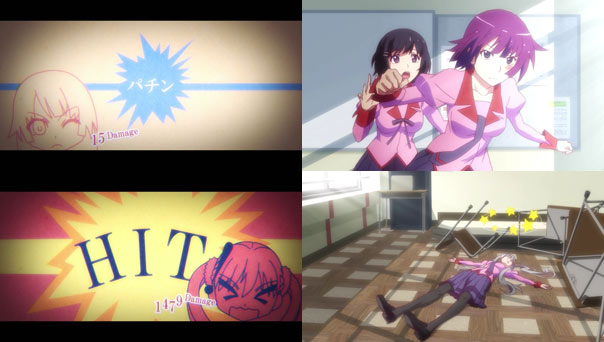 Senjougahara concedes that Sodachi may be right about Araragi’s ungratefulness, but she doesn’t care. She likes Araragi and wants to go to college with him. She’s not looking for anything in return, nor is she keeping score; two more traits on which she and Sodachi differ. Sodachi applies math to all, and in the equations that express Araragi’s wonderful life, sees herself and others as crucial variables. For that, she demands recognition and renumeration, yet Araragi, she believes, pretends those variables don’t exist; that only the sum—his happiness—matters.

Sodachi’s comeback to Senjougahara’s admittedly condescending response to her protests is to slap her in the face (doing a scant 15 Damage), which only incurs a brutal counter-punch from Senjougahara (1479 Damage + KO). Proving she is The Best, Senjougahara then passes out herself and tells Araragi to handle the rest. If this cameo is her only appearance in Owari, she sure made the most of it! 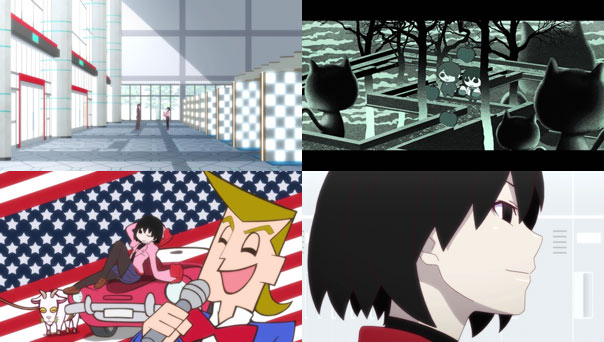 From there, Ougi’s role returns to the foreground, as she accompanies Araragi to his middle school and finds three envelopes marked “A”, “B”, and “C” in his shoe locker (why they end up in that particular place is explained by the Loki-like Ougi using gorgeous Escher-style imagery with SD versions of her and Araragi).

Araragi recognizes these envelopes as a “Monty Hall problem“-type quiz: Three doors, behind one of which is a car; you choose Door 1; you’re shown what’s behind Door 3 (a goat), and you’re asked if you want to switch your choice to Door 2. Switching to Door 2 gives you a 2/3 chance of getting the car, compared to 1/3 sticking with Door 1.

I liken Ougi to Loki because she’s very much a trickster, neither good nor evil, who has revealed next to nothing about herself while having an intense power to draw out quite a bit from Araragi. She’s also a lot like Monty Hall, a game show host (note the flashing checkered lockers), not only nudging Araragi to choose which way to go next, but also hosting a kind of This Is Your Life for him.

(I’ll also note, Ougi takes a good long look at Nadeko’s shoe locker, both a callback to Nadeko’s arc, and another reason why Ougi is so hard to figure out). 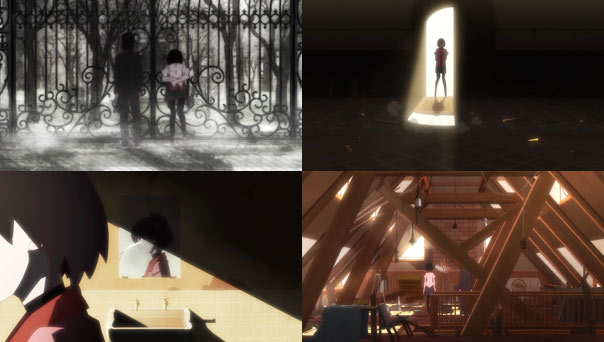 I say Ougi nudges him, but really, she’s pretty actively leading him deeper into his past, opening rusty gates and kicking in doors. That past is somewhere they both agree is the only place they have a chance of learning for sure why exactly Sodachi despises him so deeply. Ougi rules out the class assembly, as the exact timing of Sodachi’s return to school suggests she knew Komichi-sensei was the true culprit, not Araragi.

Ougi surmises it may be more the fact that Araragi has “forgotten his roots”, though she admits a lot of people do that and aren’t automatically despised for it. Her comments about who she was in grade school and middle school being “far beyond the boundaries of oblivion” and the feeling she was “born very recently”, which Araragi likens to the five-minute hypothesis, are both enticing nuggets about her, but don’t come close to painting a full picture.

But it is the further exploration of that cloudy past, when Araragi’s childhood thought process and actions were strange, mysterious, suspicious, and scary all at once, where he and Ougi hope to excavate some answers and avoid future stabbings.