Owari means “end”, so it looks like this latest story marks the beginning of the end of the Monogatari series, which is celebrated as an epic masterpiece by some (ahem) but derided as a tedious, talky, overwrought glorified harem piece by others (…jerks!), with any number of less extreme opinions in between.

The cold open and tremendous OP indicate the primary subject of this series will be the enigmatic, doll-like, too-long-sleeved niece of Oshino Meme, Oshino Ougi, with a theme of mathematics, or numbers. But in a change from other recent series, Ougi isn’t the one with the problem, i.e. the oddity/apparition.

Rather, the person with the problem is Araragi Koyomi himself. The setting of the episode is deceptively sparse—a locked classroom they can’t exit—but that classroom becomes the perfect stage for a dialogue that expands the setting across space and time, where Ougi establishes from Araragi’s testimony that the classroom itself is an apparition, likely one of Araragi’s own making. 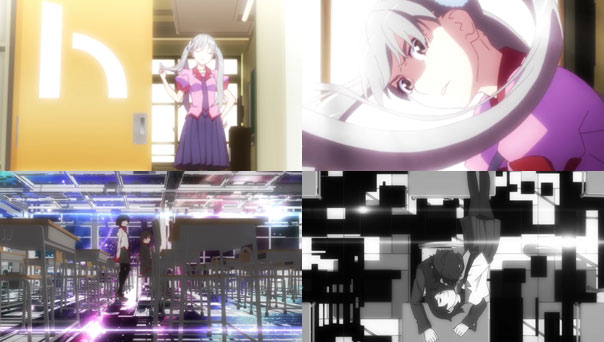 Combined with a less-rushed (for a weekly show) 48-minute runtime and a couple new takes sparkling visuals This latest narrative twist in the Monogatari formula keeps things fresh and exciting. The series has aired largely out of order, but there’s something both orderly and poetic about saving the end for last, only to go back two years to an experience that changed his outlook on life significantly and causing him to “put a lid on his heart”; at least until he meets Hanekawa Tsubasa.

There’s a new face in this past story, too: the silver-twin-tailed Oikura Sodachi (very appropriately voiced by Kitsu Chiri herself, Inoue Marina). Two years ago, when she and Araragi were first-years, she assembled the class to ascertain the culprit in wrongdoing that led to an unnatural deviation in the math test scores of the class.

Oikura can also be distinguished by her intense dislike, even hatred of Araragi Koyomi, because he always scored higher than her favorite subject, math. To add insult to injury, Araragi didn’t even participate in the suspect study group. But the assembly goes nowhere for two hours, with the students fiercely debating but not coming any closer to discovering the culprit. 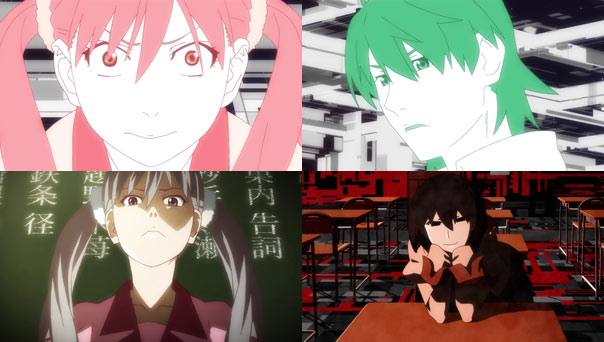 Oikura made Araragi preside over the assembly, but when he loses control, he goes back her her pleading for an end to this unfruitful madness. She relents, calling for a vote…and SHE is the one the class chooses as the culprit. Stunned, and essentially ruined as a student, she never returns to school after the incident, which makes sense as we’ve never seen her before in later series.

Araragi’s regret from the day of that accursed assembly was that he stood by and allowed the majority to make a determination in total absence of empirical evidence. Oikura was only chosen because most of the class chose her. It’s an artificial justice and righteousness that never sat well with justice-obsessed Araragi, who adpoted the motto “If I make friends, my strength as a human decreases,” which he obviously would later drop once started helping out various oddity-afflicted girls. 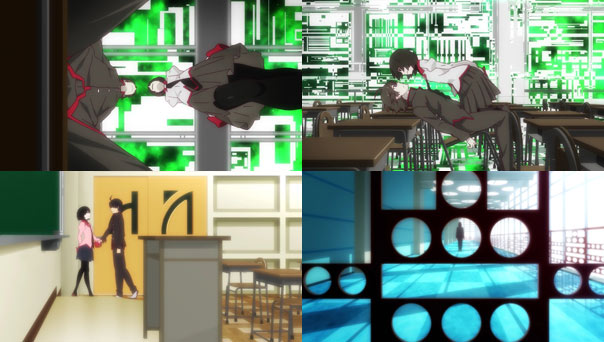 Oikura wouldn’t let anyone leave the classroom until the culprit was found, and they “found” her. Likewise, Araragi can’t leave the phantom classroom his regret created until the true culprit is revealed. Ougi wastes no time deciding it was the math teacher, Komichi Tetsujo, who was responsible for the odd test scores, by changing the exam to match the questions the study group used.

In the end, Oikura organized the venue of her own demise, the assembly, as she was sacrificed by a teacher looking to improve her own stature, and the flawed justice of majority rule. And perhaps she miscalculated because she had so much emotional investment in the investigation, due to her resentment of fellow math whiz Araragi.

Now that Araragi knows the culprit for sure, the classroom returns to normal coloring, and Ougi opens the door and lets him out. The next day, when he checks the part of the school where the classroom was, there was nothing there; the apparition dissipated. Then he stops by his current homeroom, but in a clever inversion of the episode thus far, rather than being unable to exit, he can’t enter.

That’s because Tsubasa is blocking the door, with news that someone has returned to school after two years: Oukura Sodachi, who arrives just as the teacher who destroyed her departs for maternity leave, as if the two were switching places. This should be interesting.