When the strange but gentle beasts arrive, the Gatchamen muster as if they were dealing with another enemy harming the public, but this time, at least at the beginning, is different. Similarly, the people are initially scared of the Dr. Seuss-like creatures, but when they only say supportive, comforting things to their “hosts” and embrace them in warm fuzzy hugs, they quickly accept them as a fact of life.  Well, most of them do.

O.D. warns that while they may be gentle, they’re also beasts, while Hajime remains skeptical of the beasts’ intentions as long as she doesn’t know anything about them besides the fact they came from everyone’s mood bubbles. And she has every right to be suspicious, and not just because she has an anti-conscience in Berg-Katze within her bosom sounding alarm bells, because they seem singularly interested to “making everyone one” even though that’s not possible. 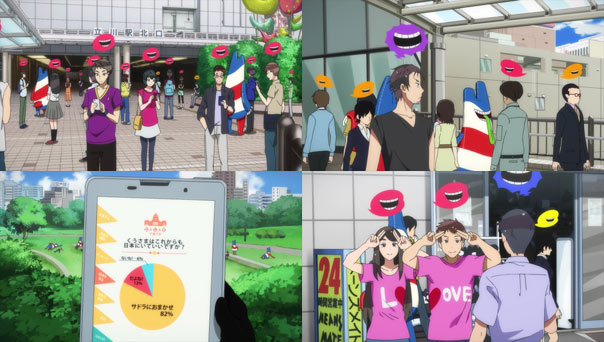 Softened up by Gel’s gentle I-Know-What’s-Best authoritarianism, 82% of the public votes for him to decide what to do about the Kuu-sama. The remaining 18% voted with their own voice, either yes or no, meaning even after all that’s happened, there’s still “conflict” that Gel can’t figure out how to eradicate. But Tsubasa remains firmly on his side and against Hajime’s inquisitiveness, which she deems negative.

That attitude towards voices of dissent is carried over to the majority, who start to single out and oppress the dissenters. An “if you’re not with us, you’re against us” mentality sets in, and the people’s disgust of those not of like mind breeds wishes for those people to “disappear”, so everyone can become one that much sooner. It’s a lot like the Sneetches, only with red mood bubbles instead of stars. 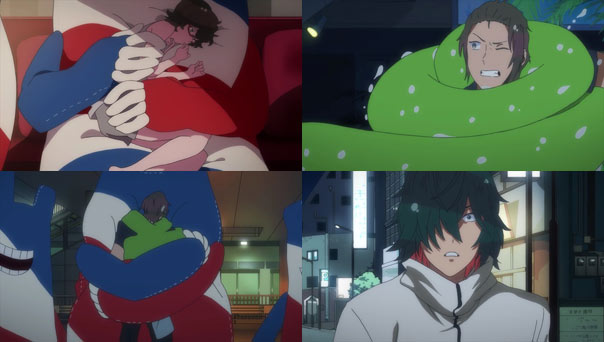 Even Rui gives up, so comfortable with his new entourage of Kuu-sama that he simply curls up into one of them and sucks his thumb, ignoring his AI X’s pleas for him to snap out of it. I for one didn’t think Rui would fall so easily, but he’s always been a lonely person, and the Kuus are a quick and powerful remedy.

Fortunately, in addition to Hajime, most of the other Gatchamen are not okay with the Kuu-sama, and are simply waiting for something bad to happen as a result of their presence. True enough, Joe is about to go out for darts with a non-red friend who suddenly gets slurped up and absorbed into a Kuu-sama. Yikes!

This is what Hajime, Berg-Katze, Suzuki Rizumu, and others have dreaded. The Kuu-sama are now so numerous and so accepted, getting rid of them will be a titanic task. In addition, they themselves are at risk of being gobbled up and added to “The One” if they continue to oppose the order of things.

It’s a most insidious and efficient alien invasion—and if Gel is to be believed, he didn’t even see it coming. But he did want everyone to be one—which is exactly what’s happening.