Sleeping Souma was a red herring! He was just nodding off a bit waiting for the perfect time to add his spices and fill the kitchen arena with a tantalizing aroma that even Hayama Akira must acknowledge has promise. But that’s pretty much it for Souma this week, as all eyes are on Megumi in much of the episode’s first half. Just when the “bumpkin” is being chastised for her lack of showmanship and clumsiness, she unveils a giant monkfish hanging from a tripod.

After remembering how hard she trained back home, under the tutelage of a big burly fisherman, she prays for Souma to lend her some of his courage, then butchers the ungainly fish like a pro, impressing everyone, even then very hard to impress Hojo Miyoko. Both girls have had to work that much harder to gain the respect of their elders due to their gender, and in Megumi’s case, her gentleness. But she’s a lot tougher thatn she looks, and proves it again here. 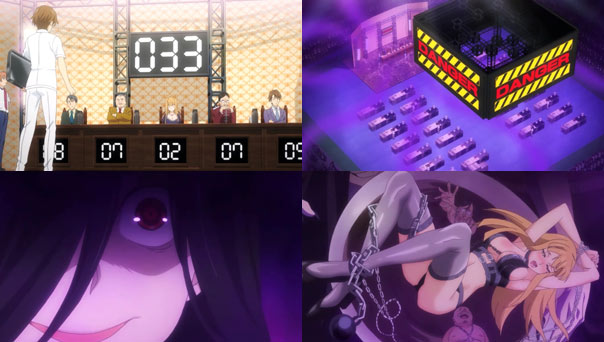 With that performance, the clock runs out and the cooking is complete. Now all that’s left is for the five judges to grade the students’ dishes on a scale of 0-100 (with each judge having 20 points to award). Even though they heap praise on the first dish, they award a measly 33 points, jaded as they are by years of impeccable culinary excellence, “pretty good for a student” ain’t gonna cut it.

With Nao having set the standard for her group thus far in the most unorthodox way possible, her arch-nemesis and rival for Erina’s heart (and verbal abuse) Arato Hisako steps to the plate with a seemingly safe-looking curry bowl made with mutton. But her approach, steeped in her family’s traditional focus on Eastern medicine and medicinal cuisine, has the opposite effect on the judges, purifying and revitalizing them rather than beating them into submission.

Hisako’s dish is essentially the antidote to Nao’s, which is apropos considering their diametrically-opposed personalities. Both are great chefs, but Nao cooks for her own sake, while Arato claims to cook for the sake of others, including Erina. She even gives Nao a bowl, destroying “Dark Nao” in a cascade of medicinal light and giving rise to a much purer “White Nao.” Nao’s defeat is so complete, her masochistic side causes her to shift her fixation from Erina to Hisako. Love is in the air!

I’m guessing this is how the remainder of the episodes will pan out: episode 22 will cover the judging of the Aldini brothers, Alice, Megumi, and possibly a few others not seen in the preview (like Miyoko and Yuuki); episode 23 be Souma and Akira, and 24 will be the wrap up. That’s assuming this show will end at just 24 episodes…which if you ask me and Hannah, would be a crime.