GATE’s ninth episode starts out doing well by me, serving up more of what I want the show to focus on: Itami and his circle of comrades and friends in a slice-of-lifey manner. Sure, Pina’s constant mistaking the world for her own gets old pretty quick, but I chuckled at their sudden fascination with BL literature. It’s also fun watching Rory haughtily claiming not to need any other garb, then changing her mind as soon as she sees something she likes.

Then Itami is approached by none other than the Japanese Defense Minister in Akiba, who orders him to take the Special Regioners to the designated safe house: a hot spring inn. Thus begins one of the stranger and yet also somehow duller onsen episodes in recent memory.

I say dull because there’s nothing that goes on that is particularly unique or interesting about their stay. They’re having a lot more fun than I am watching them, and other than learning a little more about Itami through his ex-wife (who apparently chose to marry him rather than starve) nothing much of consequence was revealed about anyone (save one person; more on that later). And fine, Drunk Kuribayashi was cool too.

I say strange because the whole time they’re relaxing and bathing and drinking, the inn is surrounded by Japanese special forces assigned to guard them, along with a bunch of American, (and Russian, and Chinese) agents, locked in a pretty uninspiring special forces forest battle.

International politics come to the fore when the U.S. President essentially blackmails the Japanese Prime Minister into taking the guards off of the Special Regioners, leaving them exposed to capture. The show also implies that had they not been ordered to stand down, the Japanese SFG would have eliminated all of the enemies easily. We get it, show; you reeeeally don’t like bureaucrats. 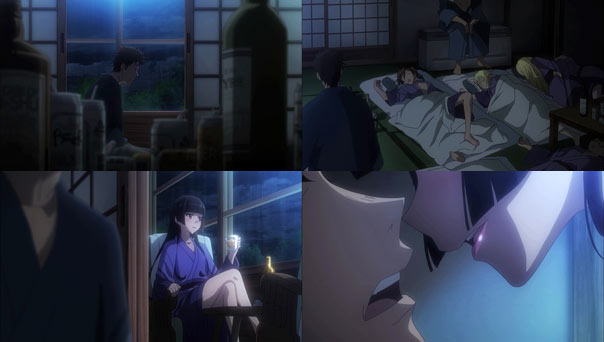 But the whole idea of A.) those enemy forces getting so close to the inn in the first place and B.) everything about the president and prime minister mostly struck me as dumb. Dumb to the point of making me question continuing to watch this show, so tired am I of our diverging priorities. The high-level political stuff is already insufferable, and there’s every possibility there will only be more of it in the second cour.

There’s a little consolation in the fact Itami and Rory are the last two standing after a night of drinking (both of them would also be the two most aware of what’s going on outside), and Rory lamenting that once she rises to godhood she’ll lose both the pain and pleasures of the flesh, before coming onto Itami, who is, after all, unmarried, available, and conscious.

But the final scene isn’t fooling anyone. There will be no getting it on tonight for Itami and Rory, as their activities are sure to be rudely interrupted by an approaching group of American guerrillas. I hope they don’t get far with their kidnapping plans and/or Rory puts the righteous hurt on them for ruining one of the last moments in her semi-mortal life to get some.