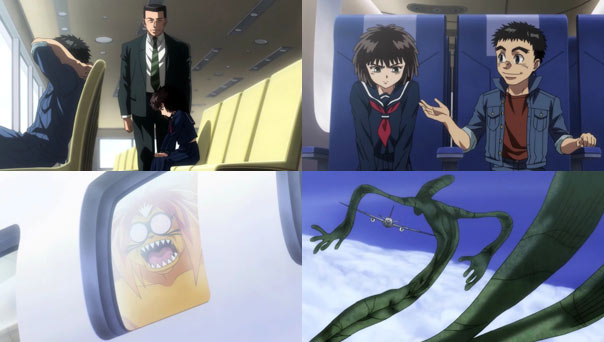 Before he even boards his flight to Hokkaido (with a very excited Tora) to find out more about his mom, supernatural trouble seems to gravitate towards Ushio. Case in point: a bitter, grieving young woman named Yuu (an angsty Toyosaki Aki!) whose father was, according to his co-pilot Atsuzawa, killed by a monster in the air. Yuu blames Atsuzawa, because there’s no such thing as plane-wrecking sky monsters…right? 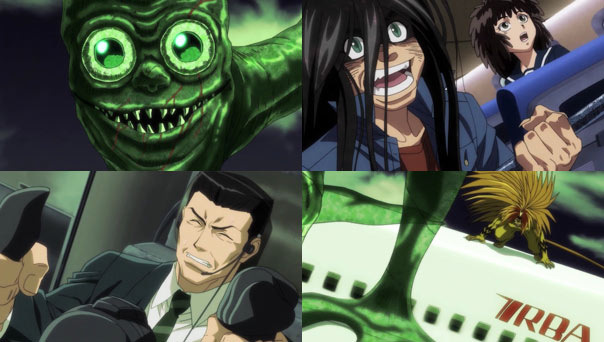 Well, actually, there is; Tora calls is a Fusuma, and it stalks his plane as well. Before that, Ushio does a fine job both introducing himself to Yuu and offering a comforting hand during takeoff, admitting to her he’s scared of flying too. As for Tora, he’s having the time of his life. The the Fusuma attacks and all hell breaks loose.

The pilots are killed, so Atsuzawa must take the controls and try his damndest to save Yuu for his late comrade’s sake. Ushio prods Tora outside the plane to deal with the Fusuma, who is weak to fire, but Tora can’t breathe enough of it to kill the sky youkai, and neither lightning nor melee attacks have any effect. 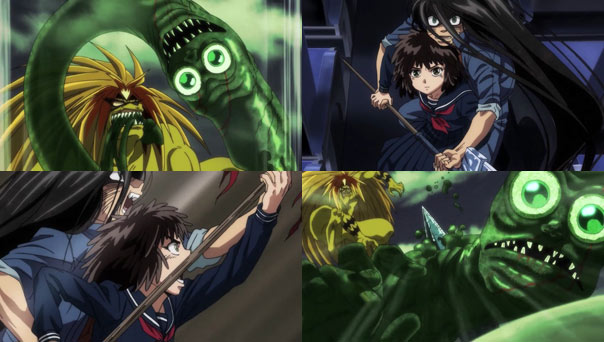 The Fusuma is truly one of those sinister yet also immensely irritating bosses for whom only certain tactics will work. When Tora breaks it to Ushio that he needs to take a more active role with his Beast Spear, Yuu is eager to lend a helping hand, and Ushio actually shares the spear with her as they deliver a blow to Fusuma. 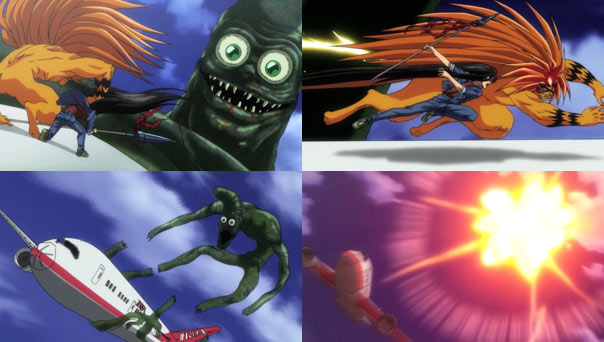 Ushio then steps outside himself, trusting in and depending totally on Tora to keep him from flying off the plane to his death, and slashes all the Fusuma’s limbs off, separating him from the plane and allowing JASDF fighters to finish him off with the requisite amount of firepower, courtesy of a missile. But wouldn’t you know it; our boys still aren’t out of the woods, as the crippled plane’s rear landing gear won’t respond. 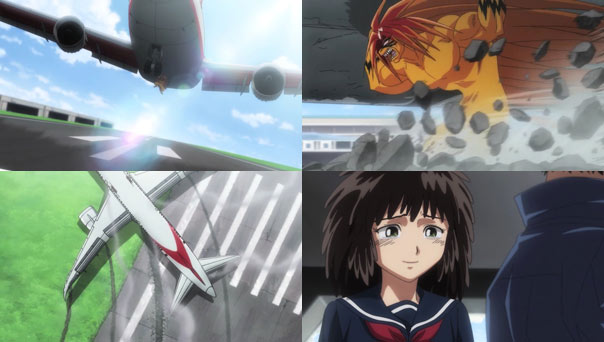 It’s another job for Tora, whom Ushio basically goads into doing by saying it’s okay if he can’t lift a plane. Tora, throughout all of this, still doesn’t quite get why Ushio is so eager to save strangers like Yuu, but is protecting Ushio so he can someday eat him—having him die by other means won’t do. So he serves as the rear landing gear, the plane lands roughly but safely, and Yuu, Atsuzawa, and the rest of the passengers are safe and sound. 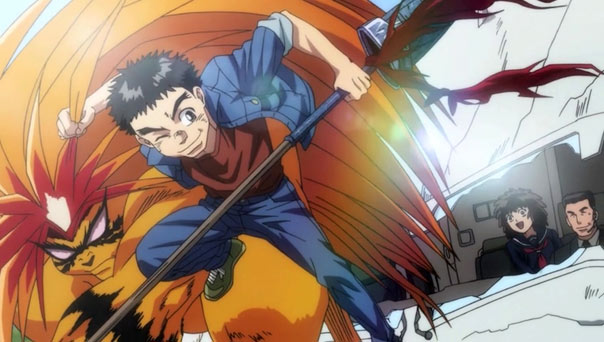 Ushio wants to help out with the rest, but Yuu sends him off to take care of the important stuff he has to get to, and Tora also keeps him on task. The implication is that the cute, feathery-haired Yuu, who has now seen the monster who killed her father and helped to slay it, no longer blames Atsukawa, and will be just fine…though she wouldn’t mind seeing Ushio again. Bawwww…