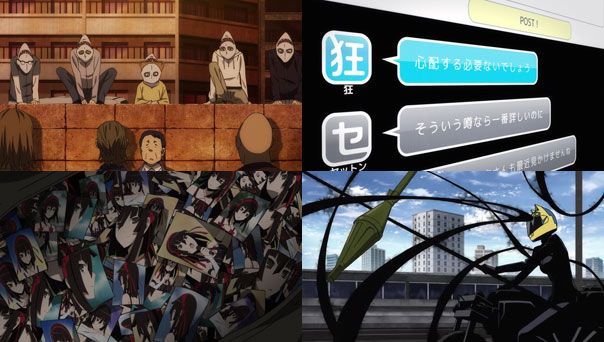 Chat rooms are abuzz with rumors about masked Dollars/Blue Scarves purging the gang of unwanted members. A combat training-obsessed loon is stalking Hijiribe Ruri. And Celty, having rescued a client’s beloved pet snake, comes home still upset about the white rider. How do all these disparate events connect? The people involved in them, and their myriad degrees of connection to one another. 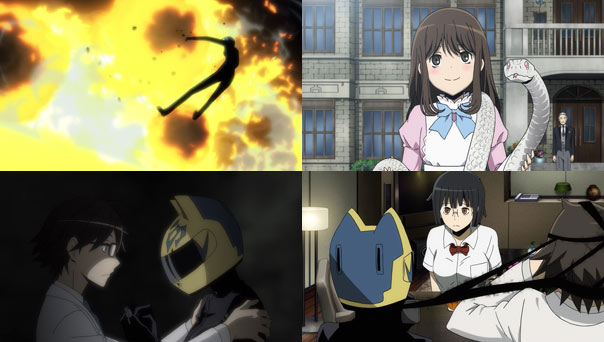 While there are a lot of developments involving newer characters and illustrating the rot around the edges of Ikebukuro are slowly spreading, this is an episode that puts the main trio of Mikado, Masaomi, and Anri front and center (as much as a sprawling ensemble show can do so). Their connections have changed, and they know it, but all three seem to be preparing to make a new go of things. Ikebukuro’s fate seems tied to these three, even if they may not have major roles in many episodes. 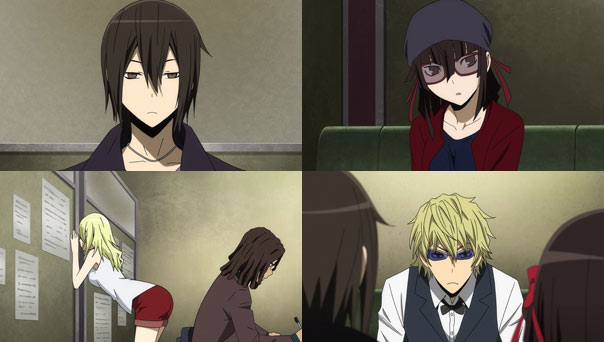 Ostensibly, this is an episode about people coming to talk to other people; those connections we mentioned being crucial to them figuring out what’s going on and receiving counsel on how to proceed. Shizuo’s bro Kasuka and Ruri come to Shizuo seeking a connection to the Dollars, a member of whom is believed to be stalking her. Shizuo is no longer a member, but he knows someone who does/is in Shinra and Celty, so Kasuka and Ruri don’t come up empty. They also pawn Ruri’s Scottish Fold kitten off on Shizuo, fearing the stalker may harm it. 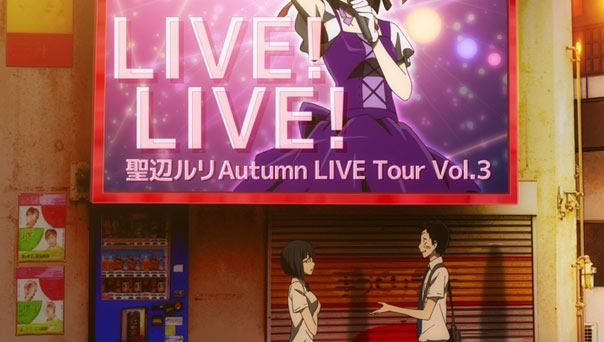 Celty arrives home from her latest exciting, death-defying mission to find Anri wants her and Shinra’s counsel regarding Mikado. Anri, who knows him as well as anyone, thinks he’s acting strange, mostly because he’s so upbeat and confident in his own power, which is decidedly not what Mikado has classically been about.

While walking home, he even tells Anri he doesn’t care about her secrets (some of which he’s seen, but neither has spoken of); he only cares about “creating a place for her” in Ikebukuro, as well as a place everyone else. It’s what he intended when he founded the Dollars, and it’s what he’s trying to translate into the real world. 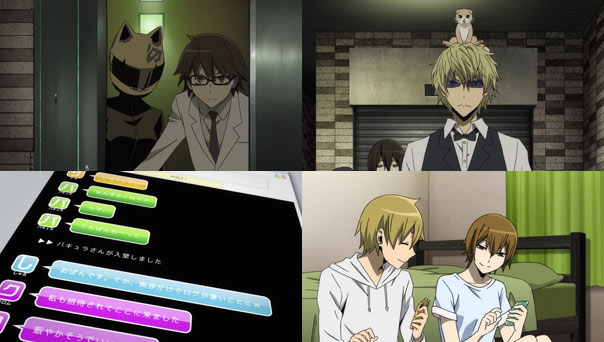 Celty recalls a past visit from Kuronuma Aoba asking about an email address that they ended up giving to him. Shinra compared Aoba to Orihara Izaya in his greediness and need to feel the whole world in the palm of his hand, or to put it another way, his compulsion to bat a ball of yarn around and revel in its unraveling. Aoba hates the comparison because he hates Orihara, but also because he knows he comes across as a younger knock-off of that more famous troublemaker.

How much Aoba is influencing Mikado and how much of this is Mikado’s will is still unclear, but at least on the surface, and despite Anri’s reservations, Mikado does seem to have a good handle on things, and he’s using the Scarves to get rid of the nastier members of the Dollars who undermine his desire to create a place for everyone. It’s a nasty conundrum: excluding those who exclude in order to preserve inclusivity.

We see Masaomi preparing to return to Ikebukuro, with Saki’s blessing, at a time when, again, on the surface, Mikado needs him the least, but deeper down, may need that old connection to return now more than ever before he loses himself. In any case, I’ll bet Masaomi will be every bit as unnerved by New Mikado as Anri is.