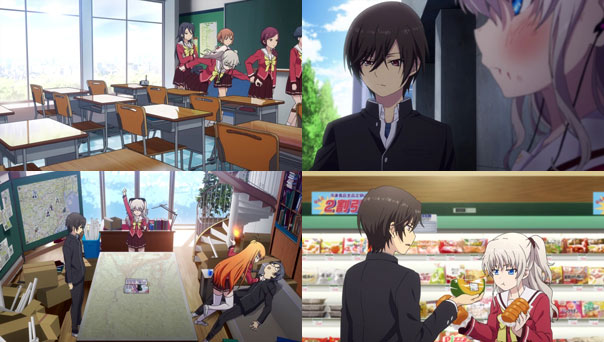 This week’s Charlotte begins with a rather unpleasant scene of Nao being dragged out of class and beaten behind the school by a mob of other girls. Yuu follows but doesn’t interfere, but what’s unclear is whether Nao is disappointed or glad about it. He presumes it’s what she gets for messing with people with her invisibility. He knows what it’s like to bear misdeeds; he’s perpetrated plenty of his own with his body-swapping.

And yet, while Yuu doesn’t play the role of the shining knight swooping in to save Nao from her tormentors, with or without his ability, Yusa and Joujirou both agree they’re “not an unpleasant couple to be around” due to their natural chemistry and spouse-like interactions. If they didn’t care about each other one way or another, they wouldn’t fight; that kinda thing. 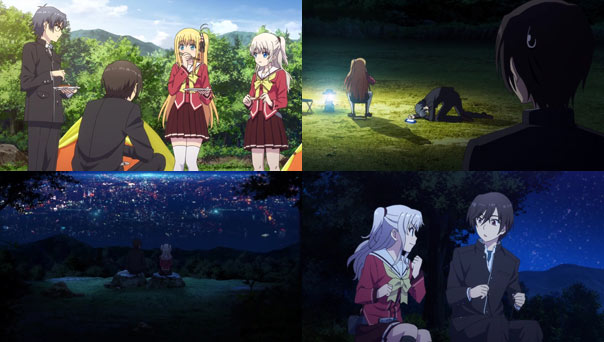 Nao believes the Council’s next target is up in the mountains near the city practicing his flying ability (the downside to the power is never mentioned). The best way she believes to do that is to set up camp and stake the place out indefinitely until they either spot him or he comes to them.

In the process of camping the group participates in typical group-bonding activites that take place during camping, like starting a fire, roasting corn, meat, and vegetables, playing video games, and stargazing. The latter is something only Nao and Yuu do, with the latter finding her alone listening to a group called ZHIEND, whose lead vocalist and composer is blind. 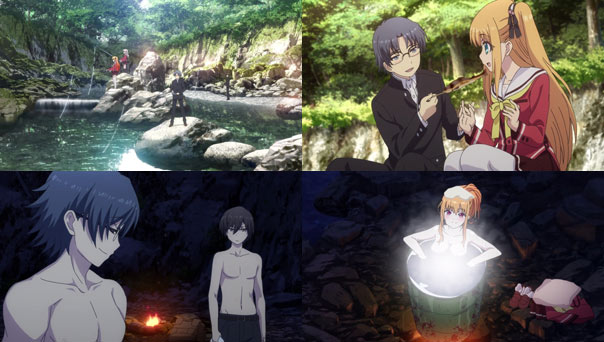 In another indication Yuu and Nao are a somewhat fated couple, he gets the same feeling from the quiet music as she does: that of being in a vast, gorgeous, lonely open space. She even gifts him her music player, excited as she is to find a fellow fan. The music makes Yuu remember the face of girl who looks a lot like a younger Ayumi but who he doesn’t know, but he’s woken from the dream when it’s his turn to keep watch.

On the second night of the camping stakeout, Yuu and Jou bathe in the river, where Jou tells Yuu it’s best if he set romantic plans aside until two years from now, when they’ll lose their abilities. It makes me wonder if this show will let us see that future and how it changes these classmates and colleagues who are gradually becoming friends. 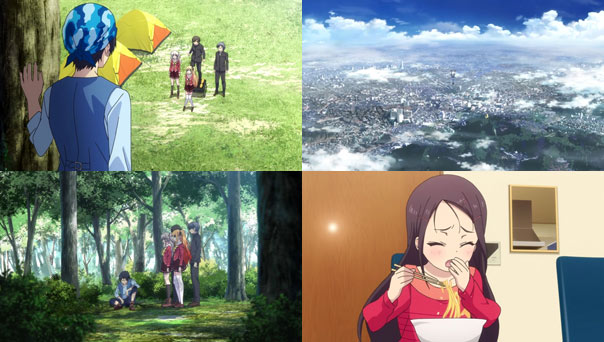 It really is a journey-not-destination kind of episode, as the flying kid mission is wrapped up extremely easily. Yuu swaps bodies with him and ends up several thousand feet above the ground (an awesome sight, to be sure), and when he comes down softly but slightly banged up, less than a minute of convincing from Nao persuades the guy to stop using his ability.

Back home, there isn’t much pizza sauce left, and so Yuu gets his first tolerable meal frmo Ayumi in a long time. He also manages to convince her not to put it in everything, finally. But then Ayu starts coughing, and her temperature is 37.8, prompting Yuu to get her under a futon. Hopefully Ayumi doesn’t get sicker as a prelude to the awakening of her own power; but I’ll admit that’s not outside the realm of possibility.