GG! has taken on a LOST-style narrative, in which the present is constantly being informed and updated by the pasts of its characters. This week it’s Naoki Miki’s turn. While helping Yuki with a hand-drawn yearbook, Yuki asks about one of Miki’s (very good!) drawings of her in a bookstore with another girl. It’s Kei, a good friend of Miki’s from before The Fall.

An ordinary day at the mall turns into a life-upheaving nightmare for both of them. This is handled with the show’s usual deftness, with particular care taken to lighting, background sounds, camera angles and focus. Miki and Kei manage to hide from all the zombies and gain the puppy of an elderly woman who became one. Survival supersedes processing what the fuck is going on. 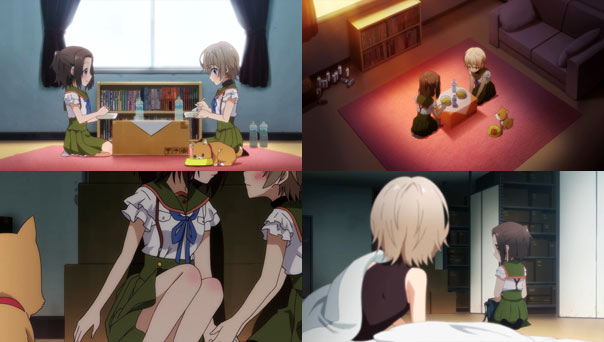 They manage to make it to a safe room, where they hole up in a room with ample food and water. But Kei almost immediately grows curious about the outside world; about what’s going on, and worries that if they stay, they’ll never be found. Miki, on the other hand, is content to stay put and wait for help to come to them. Enough times passes that Kei’s patience runs out, and even Miki’s maneuver of tenderly taking Kei’s hand isn’t enough to keep her.

Kei promises she’ll be back with help, but right there and then, she’s abandoning Miki, who is too scared to leave the mall, or even that room. Her life has shrunk into a miniature, but she’s intent on holding on to what life it is, not risking it on the unknown beyond those walls. When Kei up and leaves, it’s a gut punch, but we knew it was coming, for no other reason than Kei doesn’t exist in the present.

Meanwhile, at this time, Yuuri and Kurumi and Yuki are off on their own, having not yet met Miki (or Toromarou; we now understand a little more about why he’s a little standoffish with Miki in the present). Yuki spontaneously comes up with the idea for a school trip, using a loophole in the club rules prohibiting leaving school grounds by saying it’s a school function. Yuuri tells her to get Megu-nee’s approval, and she gets it, but we don’t see her get it, indicating Megu-nee isn’t alive at this point either, but just a delusion of Yuki.

That fact is reinforced when Kurumi volunteers to drive Megu-nee’s car. She and Yuuri are willing to maintain the Megu-nee delusion for Yuki’s sake, and must resort to loophole of their own (Megu-nee hasn’t driven in a while, and Kurumi insists she’s better, despite later confessing she only played racing video games).

Kurumi’s journey to the faculty parking lot, through a phalanx of vicious, but thankfully slow and dumb, zombies is breathless in its presentation. I know this is a flashback, but Kurumi still felt so vulnerable out there, especially when her trusty shovel was flicked away. But she gets to Megu-nee’s MINI Cooper, fires it up, and picks up Yuuri and Yuki (Megu-nee only appears in the car once Yuki’s in there, like anthropomorphic Hobbes).

After a little bit of sliding around the schoolyard and hitting a couple of zombies for good measure, the car bursts out of the front gates, and all of a sudden the saturation of the episode intensifies, as if we were watching a visual manifestation of freedom itself. A quiet, gorgeous, haunting piece of music plays as the Mini drives through the desolate, ruined city, made beautiful by the vivid colors of the setting sun. It feels like a movie. If only it was only that, and they could walk out of the theater into a world where they didn’t have to fight every day for survival.

That piece of music playing turns out to be on the Discman Kei left Miki before she left Miki. It wakes Miki up in that same room she’s been holed up in, and the contrast between her self-imposed captivity and the freedom being experience by the others isn’t lost on me. Nor is the open transom that indicates Toroumaru escaped, leaving Miki alone, though the dog may well be the one who unites her with the others.

The song plays through the credits, accompanied by black-and-white imagery from the episode. So lovely, mellow, soulful, and sad. This show just keeps getting better.