In this necessary and functional—if not particularly flashy or exciting—episode, many things come into focus as the various pieces are arranged on the board. It is clear now that Lt. Itami is a man who has always been in the right place at the right time: first Ginza, where his heroic actions gained him this new command, then his battle with the fire dragon, his decision to take on refugees. 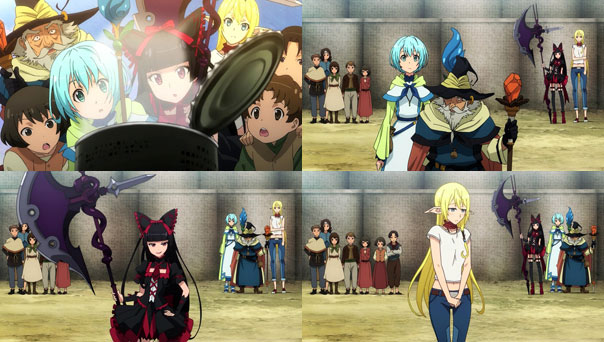 As his fellow lieutenant (a go-getter if I ever saw one) remarks, Itami’s circumstances make him a very valuable man who will likely have a lot more freedom to decide what is to be done about this Special Region. The Japanese government suddenly finds itself with a potential windfall of natural resources within its borders, which could be a game changer in geopolitical affairs.

Meanwhile, Itami’s unit is tasked with taking care of the refugees, which include the sorceress Lelei, the demigoddess Rory, and the grieving she-elf Tuka (or Blue, Red, and Yellow, if you like).

Not surprisingly, the SDF’s technology awes the natives, and even the spartan military accommodations are treated as the height of luxury, and that’s a big part about what technological advancement is all about: making what was formerly luxurious available to all, everyday. I try to never forget that when I take a shower or switch on a light…or write an anime review on the information superhighway.

Meanwhile, on the other side of the Gate, after getting a brief and somewhat unfortunate glimpse of America’s government salivating over the Special Region the Japanese found, we see that the Chinese are also interested (and yes, the Geely GE has an optional throne).

So interested, they want to ship half their population across the Gate. Of course, that would mean taking the Gate—and the territory around it—from Japan, which would mean war. Somehow the animators resisted giving the Chinese Premier a mustache so he could twirl it – and a fluffy white lap cat to pet as he discussed his plans. I must say, these quick peeks at the highest echelons of Japan’s rivals are the least interesting part of the show, so far. 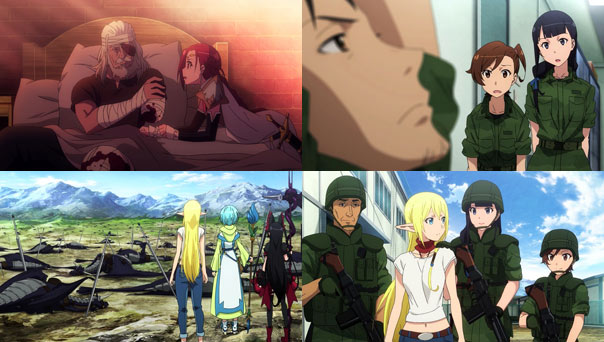 More interesting is the fact King Duran, who led his army to ruin but survived a couple limbs poorer, immediately knows what the Empire did and why, and won’t talk to the Emperor’s daughter Pina about what’s going on on Arnus Hill. Or that Tuka isn’t ready to accept her father is dead along with the rest of her village, and is worried that she and the others will have to repay the soldiers’ kindness with the only currency they have: their bodies.

Lelei tries to set her mind at ease about money, not just because the SDF lets them harvest valuable dragon scales from the battlefield, but because the “men in green” (and women too) aren’t going to charge them at all. Helping Tuka and the others is Itami’s best way to engender trust, win hearts and minds in the Special Region.

So he gives them a lift to Italica to peddle their wares. And Pina and her men are headed to the same place on their way to Arnus. When she encounters the SDF and their refugees, how will she play things?