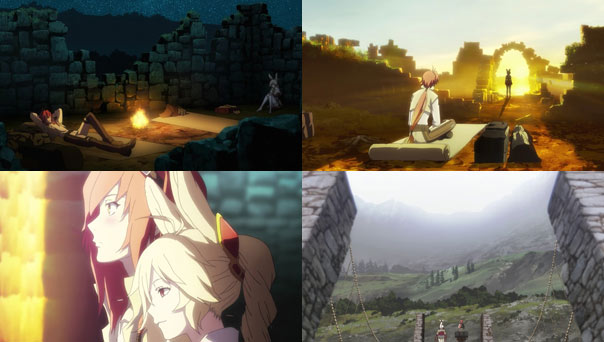 While their party is just two and the activities are limited to exploring and traversing the great expanse before them, Adlet and Nashetania’s journey is the perfect opportunity for both them and us to learn a little more about them. Take ‘Tania: she’s so excited and giddy at the prospect of this adventure, she challenges Adlet to a fight. In fact, she uses her powers for things like cutting vegetables. She’s restless, but Adlet and she both need to be focused with a Brave Killer at large.

At night Adlet warns Tania they’ll be sleeping on hard ground under the stars a lot, and we learn she’s no stranger to that. Despite having never seen so much, she has experienced more hardship than you’d think of a sheltered princess, mostly because of the tenuous hold her late father had on the kingdom, and the execution order put out for her before she became a saint. Adlet’s not the only one here who’s had to rough it.

The bottom line is, outside of arena competition, Tania has zero experience fighting fiends, who Adlet knows they’ll encounter. The “game”, if you will, then shifts from “getting to know each other” to “battle 101.”  I like how Adlet gets a very nervous Tania to laugh, thus calming her. Then Adlet gets right in the (CGI) fiends’ faces and dodges and slashes, while keeping Tania back to support him with her blades.

Their first battle goes well, and the villagers the fiends attacked are saved from obliteration, but there’s news that one village girl didn’t make it out. Adlet is ready to go after her, but Tania stops him, telling him their primary mission is to find the other Braves, and that no matter how strong they are, they can’t save everybody.

Adlet agrees with her until she lets go of his horse, and then charges off anyway, which is Classic Adlet: after all, how can he call himself the Strongest Man if he can’t defeat the Demon God and save the people? He wants to do it all, and in this case, Tania indulges him.

And this time, it may just get him in serious trouble, as the “girl” in the smoldering ruins of the village seems to be doing just fine taking out all of the fiends. When she notices Adlet, she introduces herself as Fremy Speeddraw, so named because of her rifle and the ability to summon bullets at will. She doesn’t like other humans, suspects Adlet is there to kill him, and refuses to lower her rifle to his non-provocational stance.

Meanwhile, more fiends arrive at Tania’s location, and while she’s able to deal with them herself, she loses her horse in the process. Then the person she’s been searching for, Goldof, who once let her win in the arena, presents himself before her, a newly-made Brave, like her. Tania says this now makes them equals, but Goldof still insists on bowing before her and pledging his life to her protection.

Then Goldof tells her the name of the Brave Killer is Fremy. This should be interesting!