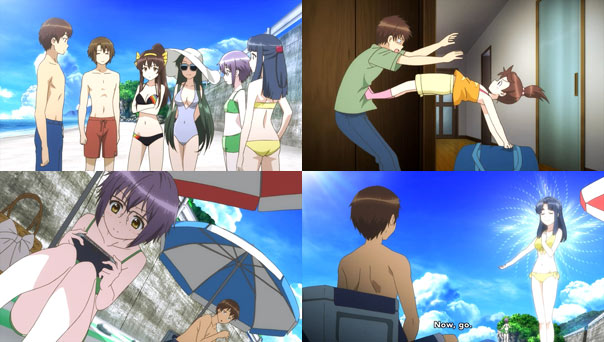 Yuki’s temporary “disappearance” felt like it would be a kind of catalyst to propel her and Kyon together, but in it’s aftermath, one would be forgiven for thinking they’re back to the way they were back in episode one, still trying to feel each other out. They’re both searching for a way to act normal, but since thing were so abnormal for a time there, it’s understandably tough; especially when Kyon isn’t sure this Yuki feels the same way as the ephemeral one who confessed to him.

But what better way to get two people back on the same page than a beach trip? This episode actually made me pretty excited because I myself will be going on a beach trip tomorrow, along with the rest of the staff (resulting in an unfortunate but unavoidable hiatus in reviews for the day). The bright sun, the hot sand, the swimsuits…it’s a very fun, summer-y vibe.

And both Yuki and Kyon have friends who are ready, willing and able to do little things here and there to make their reconnection easier, like Kyouko kicking a ball to the other end of the beach, sending Yuki out to get it, and ordering Kyon to follow her and play ball.

Kyon’s little sister comes along on the trip, and even manages to provide an unintentional assist by kicking his brother into a compromising position with Yuki that neither of them seem to mind; in fact, they’re kind of entranced until Kyon’s sister snaps them out of it.

But the fact of the matter is, both he and Yuki are thinking the same thoughts about acting normally, while meanwhile having fun spending time together one-on-one.

Tsuruya provides another key assist by pairing Kyon not to Haruhi (who at this point is pretty much out of the running…amazing figure or no) but to Yuki for the “test of courage” at night, which turns out to be nothing more than a pleasant evening stroll to a lake known for its swarms of fireflies; a romantic spot if ever there was one.

When Kyon hears Asahina screaming in fright (she thinks they’re will-o-the-wisps for some reason; one of the weaker aspects of the story this week), he runs in that direction, but not before taking Yuki by the hand.

Yuki is clearly exhilarated by being swept along, and even when they reach their destination, neither of them let go, but just soak in the tranquil beauty of their surroundings. Looks like these kids are gonna be fine. Will they (re)confess to each other in the finale, and if so, who will do it first? We shall see.