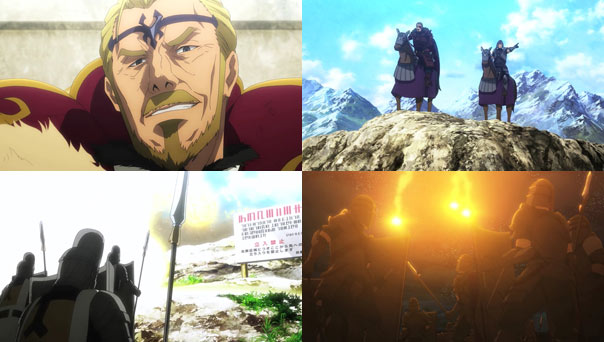 When the JSDF force sets up fortifications around the Gate, the Emperor calls for his tributary states to form an allied army to attack them (joining his Imperial Army), and we see just how effective a woefully-outnumbered force modern weaponry is against a massive army of 100,000+ with nothing but Middle AQges-era arms. None of the troops get anywhere near the JSDF, who wipe out most of the force with artillery and machine gun fire, using flares at night.

It’s a bloodbath, but it seems the Emperor was hoping for one, because it means all of the surrounding nations are now significantly weaker, solidifying his reign (though he too lost thousands of soldiers). The Japanese essentially did his dirty work, but he knows he’ll to deal with them again sooner or later, and so sends his daughter (and leader of her own military order), Pinya (Tomatsu Haruka), to infiltrate the enemy force and learn more about them.

Frankly, other than the lopsided battles, the first half was a little slow, with an awful lot of time spent in audience chambers and military tents full of old men yelling about stuff. Things pick up in the second half as the POV shifts back to Itami, who is given command of Recon Team 3 and the same basic assignment the Emperor gave Pinya: gather information on the other side.

First, Itami has time to stand amidst the utter destruction wrought in repelling the armies, estimating they killed over 120,000 both there and in Ginza; a figure very similar to the number who lost their lives in the dropping of the first atomic bomb, and certainly the most life taken by the Japanese military since WWII.

Of course, with tens of thousands of armored troops and cavalry charging your comparatively puny garrison, the JSDF’s options were obviously limited. This wasn’t a force that was going to back down, as we see from the badass general launching a defiant arrow at the spray of bullets before getting blown up by a shell. 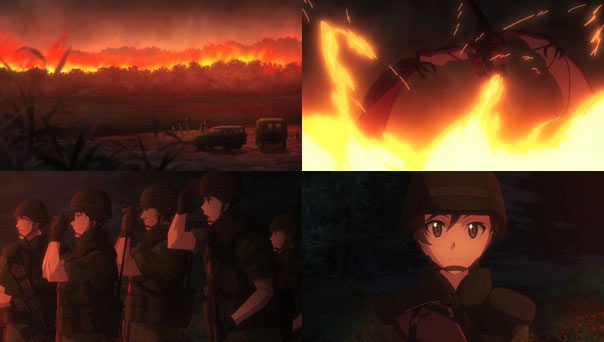 It’s a somber moment, but it passes, and Itami shows how he runs a laid back command that borders on unprofessional/disrespectful when he and his buddy Kurata sing lyrics to his favorite magical girl anime. Itami’s is an approach that irks one of the sergeants under his command, the far more serious Kurebayashi (Uchida Maaya, an inspired casting choice considering how big an otaku she plays in Chu2Koi).

Surprisingly, the recon team actually makes a bit of progress, though the first contact with the villages they visit are only shown briefly and wordlessly. Suffice it to say, they’re starting to get a rough estimate of the geography of the region. Before they’re about to camp for the night, they encounter a forest being burned by dragon-fire; a forest they know to contain a village. Itami puts two and two together and assumes a massacre is in progress. 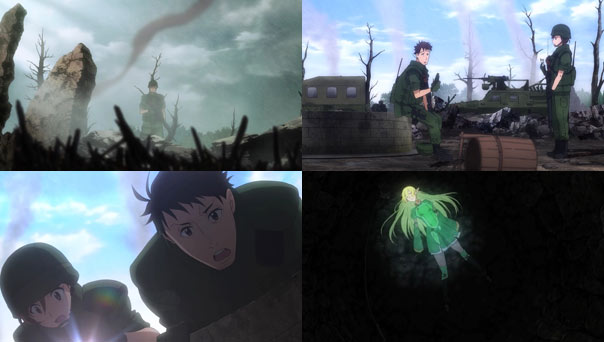 By the time they arrive, there’s nothing but a charred wasteland to welcome them, along with a nearly dry well, at the bottom of which, to Itami and Kurebayashi’s shock, lies a beautiful young woman with pointy elf ears. Is this maiden a member of Pinya’s order, or merely a villager who escaped the carnage the only way she could? Either way, their imminent meeting will likely represent the first persistent Special Region-JSDF interaction.