Rather than end its 13-episode run with a “To Be Continued” or other cliffhanger silliness (though I’m not even sure if this was meant to get a second season), DanMachi decides to spend its last episode the same way the end of a good RPG ends: with a huge final battle and a classic “good ending.”

The end definitely snuck up on us, and thus it was hard not to feel like things were rushing a little, but I was still glad for the finality of the boss battle, and all the character work and action it entailed.

The boss himself is…well, naked and kinda dumb-looking, which has been DanMachi’s problem from episode one: none of the enemies are particularly scary-looking or even particularly creative in design. This is something the most recent GARO almost always got right (to say nothing of the nightmare-inducing Gauna of Hannah’s Sidonia.)

In addition to being somewhat goofy-looking, this boss doesn’t really DO much besides mill around waving his arms around. I’m not sure I buy the fact they can’t escape the level either; if the entire town can be mustered to fight the boss, surely some of them can use their magic to open an escape route. 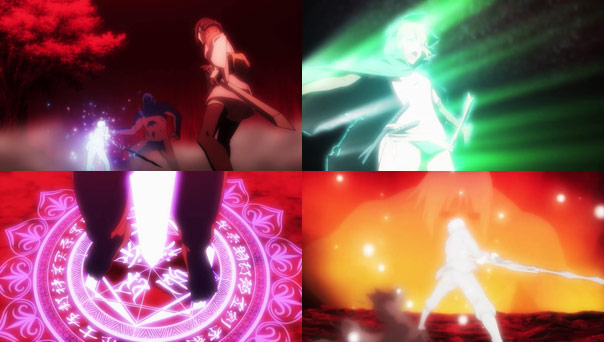 The show clearly understands the concept of distractions, decoys, and well-timed combos, because several of each are unleashed on the boss, to no avail due to his ridiculous regeneration ability. Dumb-looking or not, this is definitely the toughest boss the show has given us yet.

The combo that works in the end is akin to saving up all of the full overdrive gauges of your whole party, then unleashing those overdrive attacks in quick succession to bring the beast down, or at least shave off a decent amount of his HP. 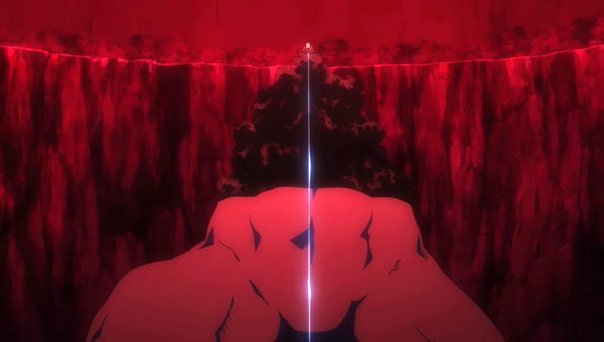 Ryuu, Mikoto, and Welf are involved in the final combo, which sufficiently softens up the boss for Bell’s “Hero’s Strike”, which causes a fade-to-white yet still doesn’t quite finish the boss; for that, he has to use the trusty runeblade Hestia made for him (and which symbolizes their love and devotion to one another) to crack the central crystal and send the boss to Nowheresville.

The final casualty list? Well, no one we know. In fact, those scumbags who kidnapped Hestia last week even gain a grudging respect for Bell, a nice bit of development even if its for characters we care about. As for those we do care about, they’re all fine, in good shape for what I imagine to be a second season a year or so hence.

At least, that’s what I hope. After all, there’s still a lot of stories to be told both inside and outside the dungeon, many levels yet to explore and conquer, not to mention Bell being the “Last Hero of the Zeus Familia” or something.

As for Freya…well, not sure why her character existed at all this season, except that she’ll eventually play a bigger role later on, when Bell presumably grows ever more powerful and popular.

Until then, I bit adieu to DanMachi, a solid action fantasy with lots of heart, likable characters, and rich world-building that never failed to entertain.