Teachers in anime are usually portrayed as single, miserable, and resentful of the youth that surrounds them, but Re-Kan! is a trend-bucker, so in its world, two of the teachers at Hibiki’s school, Moriya-senpai and Kimura-senpai, end up getting married. They’re a very cute couple, and both the guys and girls are super-excited.

Around the same time, however, a new ghost appears before Hibiki, one unlike any other she’s encountered before. This is the ghost of a very young girl who can only say one word: “Morya.” The Samurai concludes something is tying her to the living world, but she can’t seem to remember what. Yamada suggests they give her new memories to make up for the one’s she’s lost, but first they have to teach her to talk properly, which everyone, even Inoue, gets in on. 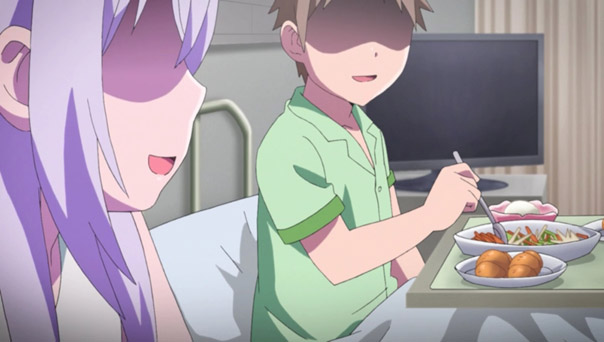 In the cold open that sets the bittersweet mood of this whole episode, we see her and a boy of the same age in adjacent hospital beds. The boy turns out to be “Morya” or Moriya-sensei, who Hibiki brings to the girl to play with for a while. There, he remembers that he used to give his carrots to her in the hospital, but now he can eat them himself. He’s grown up. 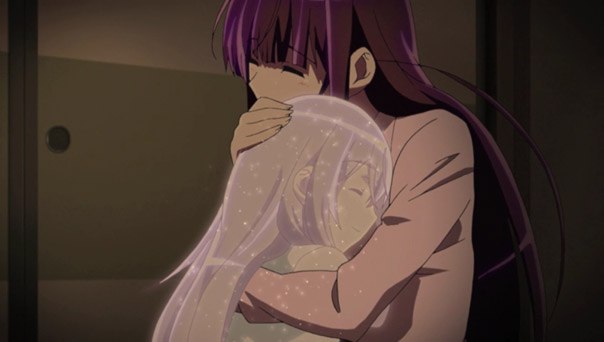 While spending the night with the motherly Hibiki, the girl finally remembers the rest: she loved Moriya and he her, and they promised they’d meet again when they grew up. She was sicklier than him and couldn’t keep her promise, but she still loves him. With her memories restored, she’s able to pass on, which she does in the arms of Hibiki. 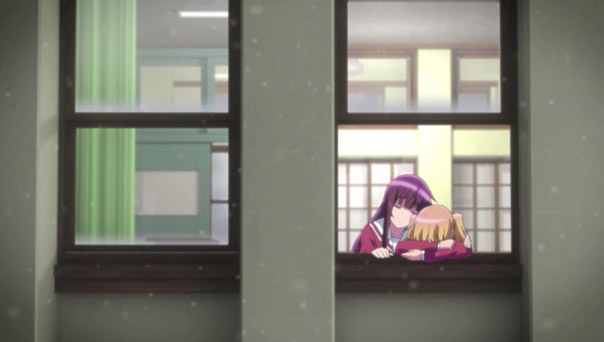 Hibiki, along with Inoue and the others, had grown quite attached to the little girl as they taught her how to speak properly and played with her. For Inoue, she’s another example of a ghost who she didn’t have to fear; and more to the point, a ghost that needed help that she wanted to help.

They’re sad to see her pass on, but in doing so inspired the friends, starting with Yamada, to look more closely at the bonds they share and spend as much time with one another, making new memories as they go forward. This Re-Kan! was another poignant, earnestly-felt triumph, exploring the bittersweet nature of loss, love, and life with grace and dignity.