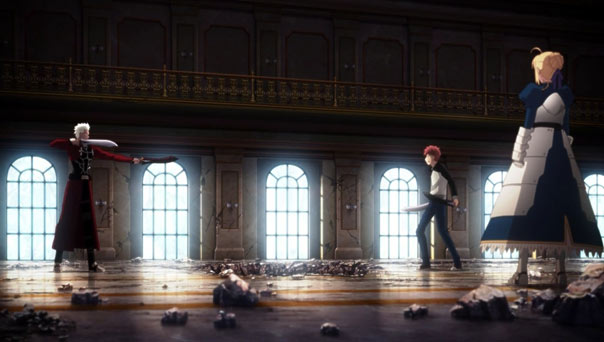 Remember, I don’t know anything about stats or paths or ends or zeros or kaleids, nor do I have any plans to branch out and learn. I judged this episode the only way I could; the same way I’ve judged every episode of UBW: on its own merits. And I judged it to be another mostly thrilling important event and important revelation-packed powerhouse.

But it wasn’t perfect. In fact, there were a couple times when Archer’s lengthy, repetitive monologues threatened to drown the central battle’s momentum. 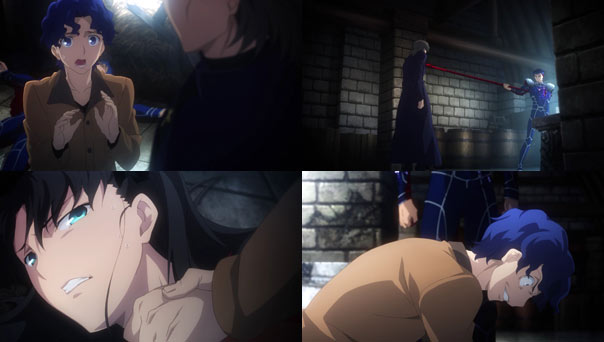 What saved this episode was the awesome wrap-up of Rin’s predicament, which didn’t take up nearly as much time, but packed plenty of punch. When we left her, Lancer was apparently dead and Kirei was preparing to rip her heart out.

To my delight, Lancer wasn’t quite dead yet, and he not only kills Kirei (we hardly knew ye…at least on the show…so ‘bye bye Kirei, but scares Shinji off with a little prick to the shoulder after yanking him off of Rin once more. 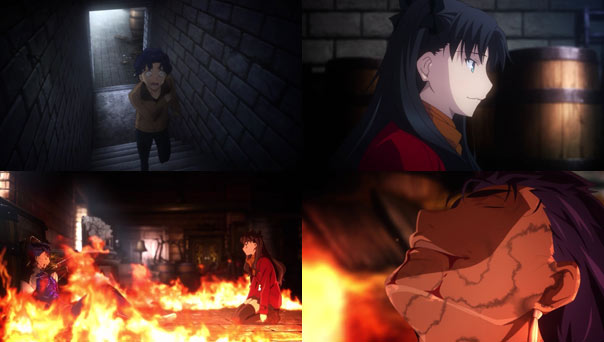 I never quite understood why he wanted to rape Rin so badly, but it wasn’t in the cards thanks to a particularly chivalrous Lancer, who refuses Rin’s thanks, as things merely “worked out.” But from there it’s clear Lancer won’t be getting back up again, and Rin tells reiterates her dispassionate view of Archer, thinking his regrets are justified, but at the same time knowing she’s not the one to judge or save him.

All she can focus on is herself and moving forward. Lancer sets himself and Kirei on fire as Rin departs. His fitting final rhetorical wish before he vanishes: that Rin look him up when she’s got a few more years on her. I’ll miss you Lancer, you magnificent bastard. 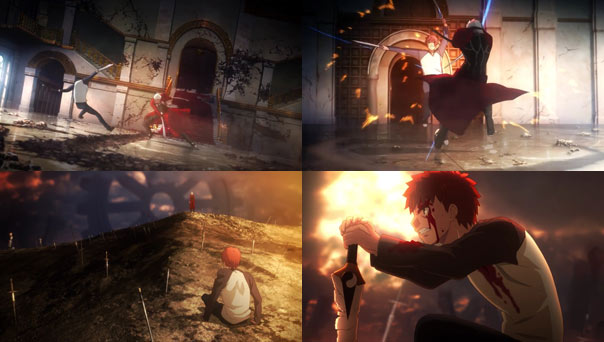 My take is if Shirou survives his fight with Archer and continues on a path with her and Saber, that would be peachy. But again and again he projects his twin daggers and again and again Archer shatters them, telling him he’s no match for him.

Still, every time Shioru crosses blades he learns a bit more and his skills get a bit better, and even though he’s taking a lot of hits and losing a lot of blood, he keeps fighting even when Archer transports them back to the UBW. 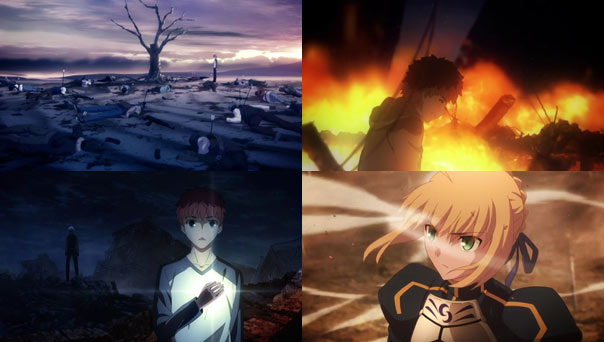 He literally fights until his body stops working, and his mind enters “hell”, both the hells his future self created and participated in, and the hell-fire from which Kuritsugu saved him. In this psychic limbo, he remembers something Archer forgot: how happy Kuritsugu looked when he saved him; a feeling Shirou wanted to experience for himself.

Unbeknownst to Shirou, Kuritsugu saved his life by somehow infusing him with Saber’s scabbard. That same scabbard heals him in his present UBW fight, and he gets back on his feet. 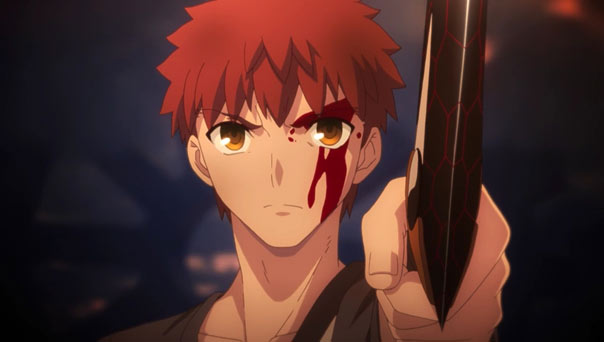 Thus the fight will spill at least partway into next week, with Shirou proclaiming he doesn’t mind being beaten by someone else, but he’ll be damned if he’ll let himself be beaten…by himself. That’s only the last of several great shonen moments Shirou gets this week.

With his body, spirit, and resolve all in good repair for the first time, here’s hoping the “sham” beats the “original”, regardless of whether he can change his mind, proving the borrowed wish of becoming a hero of justice is still a wish, and a powerful one at that.