When two heavies in judo outfits confront Takeo while he’s on a pleasant stroll with his adorable GIRLFRIEND, I’m not concerned, because a.) two guys aren’t nearly enough against Takeo, and b.) they’re clearly there to ask him for help. Takeo says yes before he even finds out what they want: for him to join the team, replacing their injured captain.

Agreeing to commit to judo for a month is all well and good…but it will seriously eat into his Yamato time. Like a good boyfriend, he defers to her wishes. Like a good girlfriend, she tells him it’s fine by her. She’s legitimately glad he’s helping the team…not to mention she really wants to see him fight!

The training is grueling—for the other judo team members, as Takeo tosses them about like ragdolls!—but that training is punctuated with texts of encouragement from Yamato, which he responds to with similar enthusiasm. It’s all very cute, especially when Yamato not only waits for Takeo outside his place with gourmet onigiri (“I can make other things!”), but confesses that she sneaked a look at his sparring—and loved every minute of it. 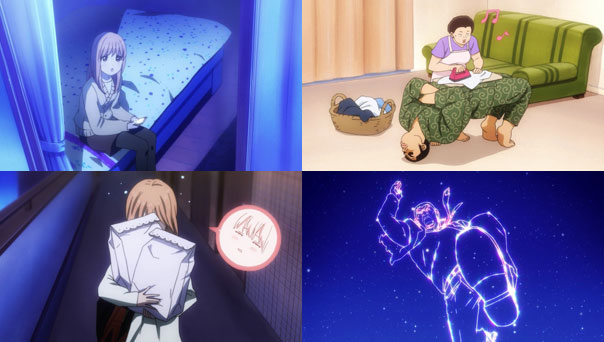 There’s a slight chink in the mood when, after spotting a groper warning on a lamppost, Takeo brusquely tells Yamato she shouldn’t come by like this anymore. A chastened Yamato goes to Suna with a double shipment of scones, worried Takeo “doesn’t like her anymore”, but Suna sets her straight, assuring her it’s just another misunderstanding, and counseling her not to get so hung up on little things.

Yamato can hardly help it though, now that she knows what it’s like to be in love—mentioning the rush she gets from the bottom of her heart at the sight or thought of him. It’s a feeling she never wants to lose. She loves him so much, she creeps herself out, and even sees him in the stars, which would creep Suna out if a.) he wasn’t such an understanding and tolerant guy, and b.) he didn’t start seeing him in the stars too! 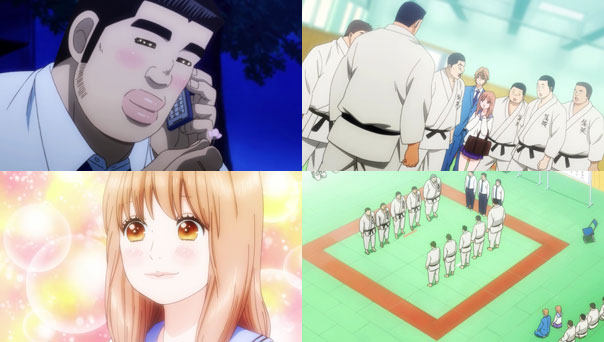 Not that Takeo is any less crazy about Yamato. After a hard day of training, he just wants to hear her voice, so texts her and gets an immediate phone call from her. Suddenly on the spot, she starts by introducing herself and then improvising, but she gives him exactly what he wants: her voice.

On the day of the big match that will put Takeo’s school over their rival by one game in the historic series, Yamato (and Suna, for that matter) is hilariously dwarfed by all the huge bodies, but small as she is, her presence is crucial to Takeo’s success.

When his old grade school buddy Tsuyoshi (who is about the same size as him, surprisingly) sees Yamato, he believes he’s already won, since Takeo has started “wasting his time” on romance. But he couldn’t be more wrong. Takeo may not know exactly what strength is, but Yamato’s presence increases his focus and his resolve to do his absolute best. He’s there first and foremost for her, not the judo team or glory. He wants to put in as much love and effort into his judo as she’s put into her cooking.

After a spirited bout that excites everyone, not just Yamato, Takeo manages to throw Tsuyoshi down and win the match, putting his school over the top, 3-2. Afterwards, Takeo thanks a Yamato who is already close to passing out from excitement, taking her hands into his and making it plain that he won because she was there cheering for him.

Then the two of them and Suna look up at the sky and spot more constellations…of themselves! And Suna! And a macaron! (Seriously, Yamato would do well on Food Wars…) Takeo was crazy strong before he met Yamato, but now that she’s in his heart, and he in hers, he’s become even stronger. And I’ll tellya what else is crazy strong: this frikkin’ show.