Kusanagi has had six boyfriends in six months, if her comrades are to be believed. But what some of them might call a sickness, I call enjoying her independence and the personal freedom of owning her own body again, something that weighed on her a long time. And she deserves to be picky, as she’s a singular catch herself. After watching her fling herself around and throw herself into harm’s way time and again, it’s gratifying to finally see her enjoying herself with something that has nothing to do with work (more on that in a bit).

Turns out the record for amount of “vacation” time she’s able to have with her new BF is just five hours, as she’s constantly interrupted by those comrades of hers, who ae charged with shutting down a terror plot ostensibly about the sale of water in Kuzan; water being one of the resources about which wars will be fought with increasing frequency and magnitude in the future; something Californians are already starting to feel.

In any case, the terrorist bombing is almost too neatly synched with the explosion of a dam, and a detective is found with a suitcase containing prosthetic legs. Kusanagi’s men prove their eliteness yet again by pacifying the situation and helping to save her from the terrorist leader, who is not only able to break her ghost lock, but inject a virus that creates pain and muscle spasms in her right leg. Her right prosthetic leg. Hmmm… 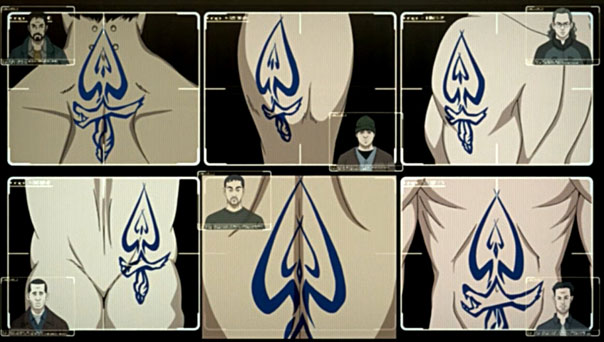 All six perps have falsified memories and bear the same tattoo indicating their connection to a Qhardi rebel named Scylla, who might also be the notorious Fire Starter whose virus has been the bane of Kusanagi and her team throughout this show’s run. Only Kusanagi is certain he’s dead, so it must be someone else.

While conferring with her comrades in person, we see Kusanagi has not only not changed her pants, but cleaned up the tears to make them half-hot pants, a look I dearly want her to continue to sport in the next ep, because its a good look and she’s got the gams for it.

Speaking of gams, Kusanagi pays another visit to her BF for a “tune-up”. Again, it’s nice to see this cute, playful, tender side of Kusanagi. She’s downright disarmed by this guy…as he checks out her legs. We later learn that he runs a high-end prostheses business, and Detective Togusa comes to him with questions about the legs found by the dead detective, who was himself at least partially cyborgized. 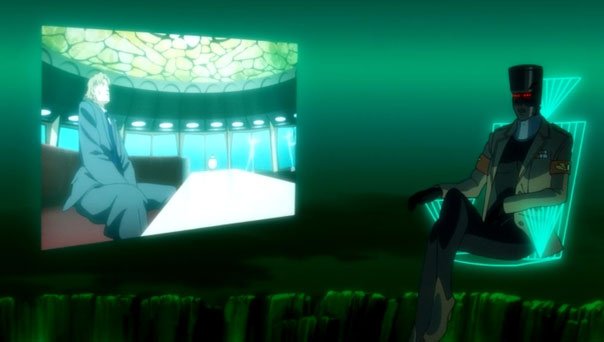 And that’s when the episode throws down the gauntlet in the form of everyone’s least favorite metal Easter Island headed military official, Hozuki, in cahoots with Kusanagi’s BF. I tell you, Motoko-chan can’t catch a break. Is this arc setting her up for betrayal and heartbreak, or is all her lovey-doveyness an act, and she already knows who she’s sleeping with, and is sticking close to gather intel? We shall see.