This may seem as sudden as Takeo asking Suna about girls, but I’ve decided to drop Mikagura and pick up Ore Monogatari!!. After hearing so many good things, I finally taking a look at the first episode and then the second, and fell in love about as quickly as Takeo fell for Yamada…even if he just as quickly judged he had no chance with her against the mightily dreamy Suna.

What’s so admirable and refreshing about OM!! is that as frustrated as I’ve been with Takeo for thinking that in the face of so much overwhelming evidence to the contrary, Takeo is by no means a fool for thinking he has no shot. Not only has ten years of hanging with Suna warped him, but all of society has, as well. Suna’s the one the cuties gravitate towards. He thinks they may accept a gentle giant’s help, but they’ll never kiss him.

Not to mention both Suna and Takeo aren’t all that experienced with girls (Takeo is just experienced in turning them down). This isn’t like the butt tree; girls can be hard to read if, like Takeo has every reason to, you’re not familiar with the language they’re written in. 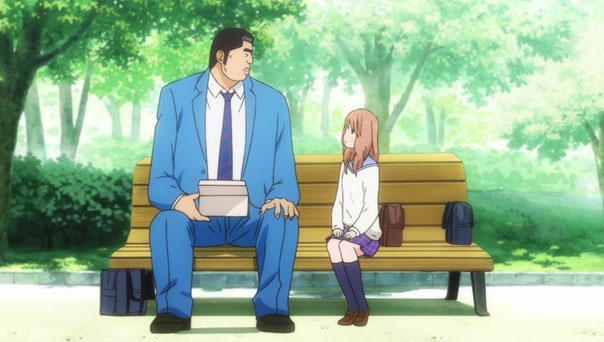 Both Suna and Takeo seem a bit unsure of what to do with this tiny, kind. delicate beauty who could probably hold her own as a pastry chef in Shokugeki no Souma, but Takeo goes with the most obvious explanation: she’s hanging with them because she’s interested in Suna, and operates under the incorrect assumption the best he can be is a cheerleader for Yamato.

Watching Takeo do that, and constantly undermine his position, is hard to watch, but I’m enduring because I’m hoping the show won’t stay on this “will he won’t he notice the truth” tack forever. But even when Takeo saves Yamato from an errant steel beam (this is an anime) he instinctively goes to the beam, while Suna goes to her.

The awesome twist is that they don’t just watch from a safe distance: not only does Suna help Takeo with the beam, but Yamato helps as well. Heck, it might’ve been her who broke off from Suna to rush to Takeo’s aid. We’ve heard how Suna has looked out for him in the past, and there’s no reason to think he wouldn’t help his friend out here, but Yamato was just a step quicker. 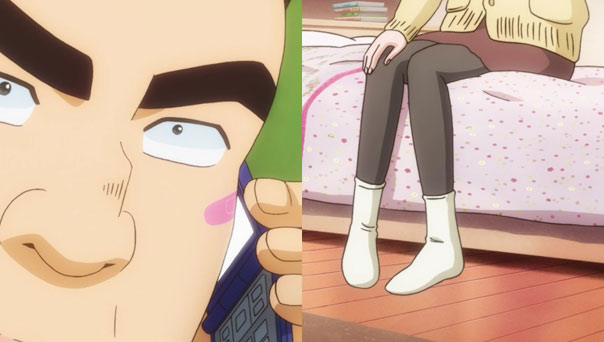 If there’s to be any movement with this Yamato x Takeo pairing, Yamato is going to have to take the initiative, as she did when she came by with a cheesecake thanking him for rescuing her on the train. And thankfully, she does, asking if this time, she can meet with him alone.

Takeo only sees this as an opportunity to hear about the particulars of Yamato’s feelings towards Suna, but I’m hoping Yamato will be able to clear up his assumptions. I’m also heartened by the fact that even if she doesn’t succeed so soon, her feelings for him aren’t going anywhere soon.