Things couldn’t get much lower than they got last week, with the band unable to play together and various factions disputing whether to continue complaining to Taki or give in to his very new way of doing things.

Perhaps demonstrating her future as a diplomat, Haruka manages to work a weeklong ceasefire, during which time they’ll practice and attempt to get to a point where Taki will at least call them an ensemble, and only complain if he still doesn’t allow them to go to their precious SunFes.

While all the negotiating takes place, Reina pretty much floats above it all, blasting her trumpet for all the school to hear. As narrator Kumiko puts it, this is Reina’s way of expressing her apathy for all this political bullshit…and I’m with Reina! They’re a band, for crying out loud; not a social club. If they want to go to SunFes, they need to be good enough to go, and the only way to do that is to knock off all the nonsense and get playin’. 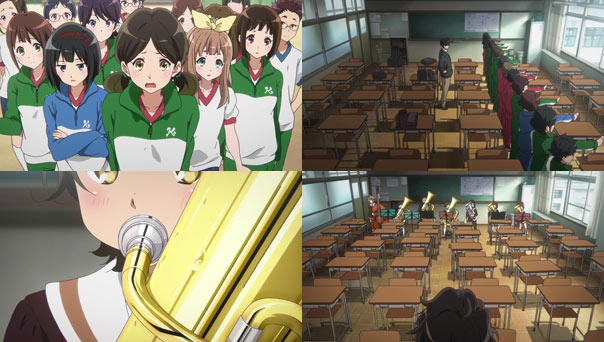 The accord thus reached, the more whiny of the band members are subjected to more of Taki-sensei’s abrasive tutelage; having them run laps before playing to build up their hearts and lungs; giving them semi-meditative breathing exercises, and singing solfège prior to creating overtones in group practice. In spite of their resentment for the man dishing out all this work, the band steadily gets better. 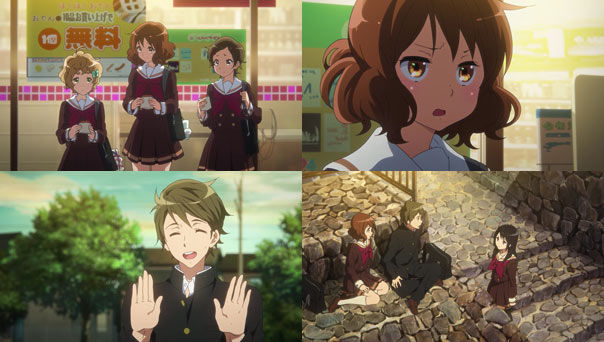 Did I mention how much I love the relationship between Kumiko and Shuichi? She’s surly with him on the surface as usual—especially when he gets a dig in about her being cynical…which is true, by the way!—yet she still goes with him and hears him out about Reina getting into trouble with the seniors.

They do this in a very romantic spot, like that bench in the first ep, and even if the content of their conversation will never be accused of being lovey-dovey, the simple fact they can interact so casually and comfortably speaks volumes. There’s something there, but unlike other things this week, it’s left unsaid; whether it will remain unsaid all season remains to be seen.

Then they get in trouble when Shuichi blames Taki for not defending Reina—just when Reina is passing by on a bike on her way home. This is a bit of a coincidence, but I’ll allow it, because Kumiko realizes she made the same blunder she did back in that flashback that started her “rift” with Reina. She knows she can blame Shuichi for stating the behind-the-back talking, but she can’t deny that she agrees with his doubts about Taki. 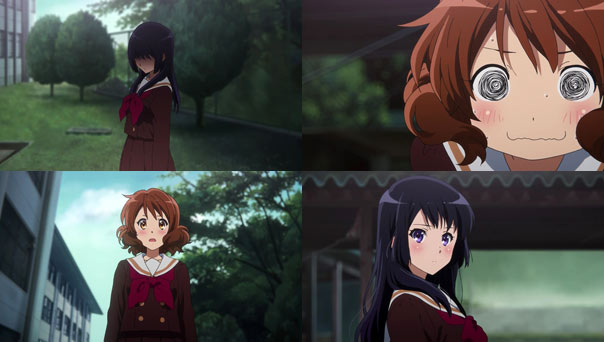 Kumiko’s fresh error vexes her during her parent-teacher conference (where we learn she followed her older sister into concert band, but her sister eventually quit), and when Reina asks Kumiko to join her in a dark and secluded corner of the schoolyard, she’s afraid of vicious retribution for that error.

Thankfully, Reina isn’t that kind of person. She apologizes, in her curt way, for saying too much. But that simple honesty broke the ice, allowing Kumiko to come out and say a lot of things to Reina she could never get around to saying until that moment: she’s sorry; she won’t say things about people behind their back; she’ll practice hard; she was inspired to work harder and aim higher by Reina’s Dvorak.

Kumiko saw the opportunity to say these things, and while she fears Reina will think she’s creepy now, she still feels good about saying them. For her part, Reina seemed moved by Kumiko’s sudden torrent of spoken feelings. Two episodes ago she made initial contact; now a dialogue is open, and they’re on their way to something resembling friendship.

Kumiko decides not to keep quiet again in practice, encouraging a sleeping bandmate to join them in playing together, and surprised when she agrees. The rest of the band is able to channel the energy from their mutual dissatisfaction with Taki-sensei into becoming a better band, which may have been Taki’s intention all along.

When their week is up, the ensemble doesn’t sound perfect, but it does sound like an ensemble. They’re playing together. They can hear each other, and they’re playing like they have something to prove. The school hears them too, and are impressed. So SunFes is on, complete with a grueling, no-holds-barred practice schedule. I know it won’t be smooth sailing from here on in, but the progress both Kumiko and the band showed this week was very heartening. And hey, no one’s dying of an unspecified illness!