By formally introducing the main character of the Haruhi franchise in just the third episode of a spin-off starring a meek bookworm, Nagato Yuki-kun seems to be issuing a challenge—to itself—can Yuki hold her ground when a charm factory like Hirano Aya’s Haruhi crashes her show, or will she disappear, as the title suggests?

I would imagine most of the audience turned off by all the show’s changes have already checked out (unless they’re hate-watching). Now it’s up to the show to deliver for the cautiously optimistic viewers who stuck around to see where they’re going with this.

In terms of Yuki being replaced as the protagonist, that isn’t going to happen, nor would I want it to: Haruhi is a supporting character who just happens to steal every scene she’s in with her charisma, and instant chemistry with Kyon. Their half-hostile, half-flirtatious sparring on display here is nothing new for veterans of the franchise. And listening to two true pros at work in Hirano and Sugita is always a pleasure in and of itself.

As it has every episode thus far, the show doesn’t forget to give Yuki and Kyon a romantic moment or two to keep their romantic potential active. Here, Yuki gives Kyon an extra-formal thank you for helping her this year, and then prays at the shrine for the courage to tell him her feelings—her real feelings, not the word salad she dropped on Haruhi and Kyon in that cafe.

That being said, I loved how her melon soda refilled when she realized she could call Kyon a friend without anyone thinking it’s weird.

The new year brings with it more Haruhi, and when she infiltrates North High with her transfer student pet Koizumi Itsuki (who doesn’t appear to be an esper) and moves right in, getting Yuki to agree to make them members and make her Executive President. In an odd moment, it seems like Haruhi heard Kyon’s inner monologue. Was that just an easter egg, or a sign things could get more supernatural? 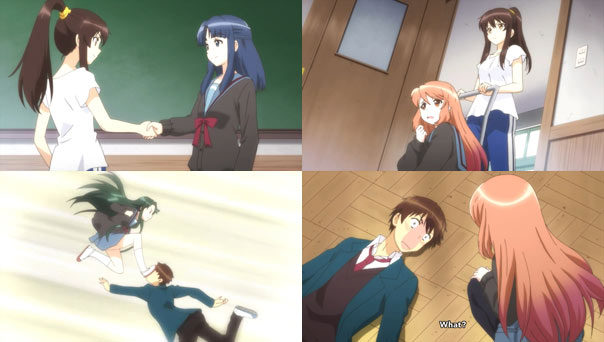 That’s going to be another big question: assuming Nagato will still have the greater share of screen time as the official protagonist, how much will the people Haruhi has amassed change? Does she have the same godlike power to make her delusions reality she possessed in the original series? Did the show start out like a conventional, non-supernatural rom-com as a feint?

I’m skeptical of that. I see this Haruhi as no more a god here than Yuki is an alien or Asahina a future-girl. I’m not saying there’s no way they’ll become those things under extended exposure to Haruhi, but I doubt it. The challenge remains, the lit club is now much louder and livelier (the whole cast does a great job creating the aural chaos of such a club), and Yuki must become louder and more aggressive in order not to be left in the dust.

The good news is, Nagato doesn’t need to grow her hair long enough to put it in a ponytail…though if she really wants to, Kyon won’t stop her.