This week’s KanColle was another satisfying character-driven piece in which our plucky, “Bucky” protagonist Fubuki faces her latest trial: watching a friend surpass her. It happens very suddenly, as these things tend to do: one minute, regular old Yuudachi is inexplicably glowing and complaining of a light fever; the next, she’s in the factory being refitted into a new, improved, and more mature Yuudachi.

The physical transformation is pretty significant; Yuudachi is now taller, bustier, and wearing an upgraded uniform, and sporting a more detailed hairstyle. This may just be me, but it also seems like her speech patterns are now less childish, and she uses her trademark “-poi” punctuation less frequently. 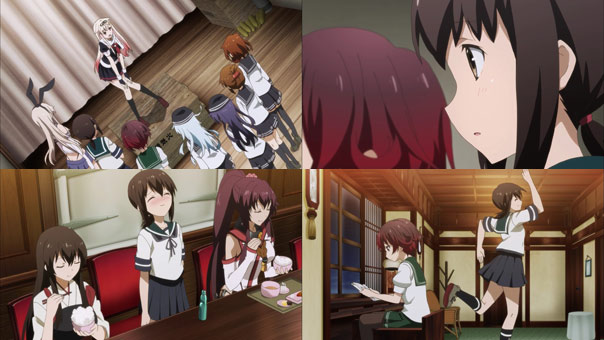 On the one hand, Fubuki is impressed and proud of her friend. On the other, well, she’s understandably jealous, and it makes her wonder why Yuudachi was chosen for a refit before her, the flagship of Mobile Unit Five. She’s not so much looking down at Yuudachi but at herself, believing some kind of inadequacy made the admiral pass her by.

Her two heavily-eating senpais, Akagi and Yamato, both assure her that she’s done well so far and tell her not to worry about such things and to keep up the good work; if she’s chosen for a refit, she’s chosen; if she’s not, she’s not. Akagi even pats her on the head, a simple gesture that nonetheless sends Fubuki into a fit of beaming an joyous dancing (if you wanna call it that); so much love and respect she has for the lovely Fleet Carrier.

Then she hits another speed bump (or should that be land mine?) while on a run. She bumps into Yuudachi, who’s practicing her shiny new weapons, and they’re both summoned to Nagato, who issues them new orders. Yuudachi is reassigned to the First Carrier Group—meaning she’ll get to sail with Fubuki’s beloved Akagi—while Fubuki is relieved as the MU5 flagship and ordered to return to the Naval District.

It’s a new low for Fubuki, who assumes this is punishment for screwing up somewhere, someway. Mutsuki tries to tell her not to jump to conclusions, and praises her as Akagi had, but only manages to make Fubuki believe people are simply showering her with praise to be nice, and it’s gotten to her head. Walking on the beach with her head down, she bumps into Kongou and collapses into her arms sobbing. 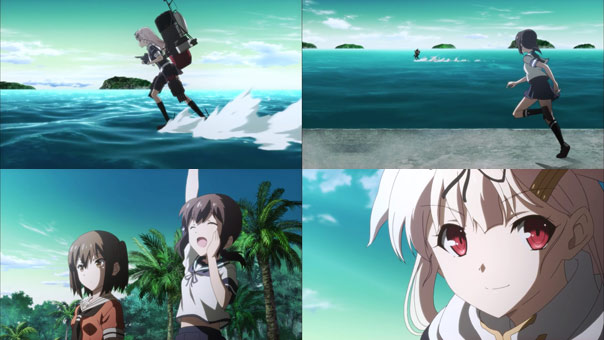 That night Fubuki has a dream in which she can’t catch up to Akagi and Yuudachi no matter how hard she tries; a dream she knows she shouldn’t be having. At dawn she visits the waterfront, where Yuudachi is practicing tirelessly under Jintsuu and Sendai’s supervision.

As Sendai explains, Fubuki inspired Yuudachi to want to try harder and aim higher, so she went out every night practicing like this, until it paid off. One could say she maxed out her stats in her previous state, necessitating the refit. This snaps Fubuki out of her funk, as she realizes she isn’t the only one working so hard; everyone is, both for themselves and for each other. She then cheers for Yuudachi, who is happily responds with a hearty “POI!” 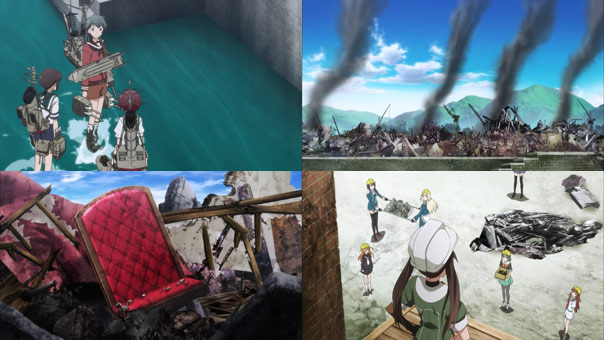 Feeling a lot better about things, she travels with Mutsuki and Mogami to the Naval District, which turns out to have been bombed by Abyssals who took advantage of the thinner defense. Fubuki’s character work segues nicely into this resumption of the war storyline, because it’s likely she was ordered to step down as MU5 flagship and return to the District for a higher purpose, not as punishment. The Admiral (whom we’ve never actually seen) goes missing, but no one else is hurt, and the rest of the fleet is right behind Fubuki, and they all work to repair the base. 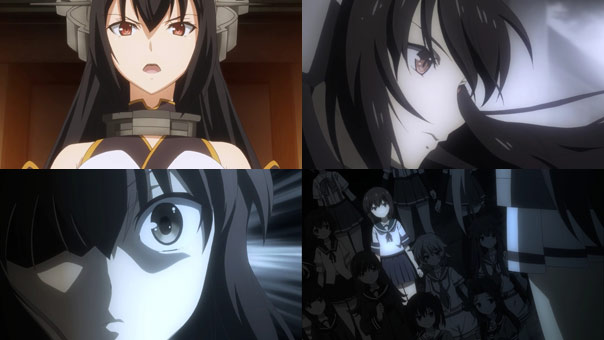 Nagato also finds the Admiral’s standing orders, which confirm my theory that Fubuki wasn’t being punished: she is ordered to undergo remodeling, just like Yuudachi. Mind you, she’s not glowing the way her friend was, and her cold staring reaction almost makes her resemble an Abyssal, but it’s one thing for your friend to suddenly be re-fit. It’s another entirely for it to be you. She’s going to undergo some major changes, and change is always a little scary. Still, I look forward to seeing what mods she receives.