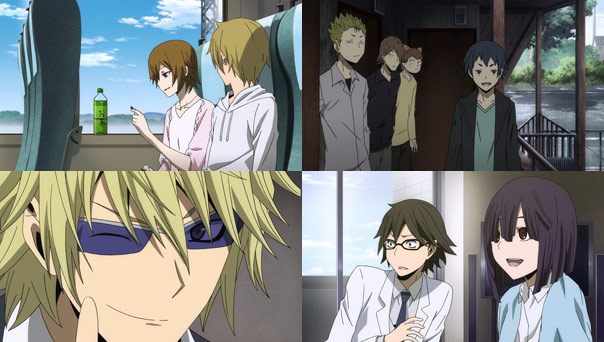 Masamoi’s sublime life on the run with Saki is made possible by Masaomi’s services as gofer to Izaya. He doesn’t like it, but he has no other means of maintaining such a life. He’s like a pennyless toppled king living comfortably off the charity of those he probably shouldn’t be dealing with if he truly wants to stay out of the fray.

Case in point, shortly after running away, Akane was convinced by Izaya himself that Mitzuo was a hitman after her, hence her preemptive strike. Shocking everybody, Mitzuo is able to lay on that Heiwajima charm to assure the would-be mini-assassin this was Izaya’s idea of a little joke; one he’ll be responding to in kind.

Last week I opined that Mikado couldn’t stay cooped in that dingy flat forever, but rather than leaving of his own volition, he is instead gently dragged out by Aoba and his goons, who take him to their hideout, one of those abandoned warehouses Ikebukuro seems to be positively littered with.

This happens to be where Varona planted her bike trap, and sure enough Celty is there, looking for Varona, who is watching her from a rooftop. The mouse-and-cat-and-mouse game on display is making Ikebukuro more appealling to Varona all the time. 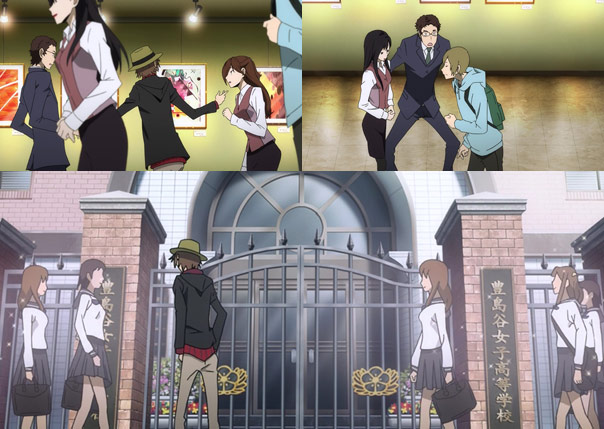 Chitoge has another opportunity to demonstrate his impeccable feminism by forcing the proprietor of a non-straight-and-narrow art gallery buy a nearly 2-million-yen painting for his female employee, who was trying to work Chitoge, in a lovely instance of a routine con backfiring in the face of one who recognizes it for what it is.

Whether Walker does too or not, he goes in to complain about the saleswoman’s lack of eloquence in describing the works of his favorite illustrator, only to be kicked out for being blacklisted. Walker, a suspected Dollar, is why Chitoge is there. But he’s always there for a woman in need, even if that need is false.

With his “senpai” in his clutches, Aoba surrounds Mikado with his chattering, giggling goons, identifying themselves as the Dollars who jumped Torumaru, essentially starting a war under Mikado’s nose, but in his name. Aoba says they’re also technically Blue Square, longtime foe of Masaomi’s Yellow Scarves, and he appoints Mikado as their leader, insisting they’ll follow whatever orders he issues.

In setting all this up, Aoba shows his true colors to Mikado for the first time, and they’re colors as cold and cruel and manipulative as Mikado is warm, kind, and passive. He knows Mikado doesn’t know the first thing about what to do with the power being thrust upon him, and that’s the point: Aoba wants Mikado, who naively founded the Dollars, to reap what he’s sown. He wants to corrupt him.

Meanwhile, Akane turned out to be an elaborate trap set by Izaya and Namie to frame Mitzuo for wasting three yakuza belonging to Shiki’s company, manufacturing further chaos. But the focus here is on Mikado’ choice, with Masaomi on the outside looking in and increasingly unsettled by the chat room silence.

That’s kind of where this episode falls down, because neither Mikado nor Masaomi are the most compelling characters on the show, especially now that they’re separated. They’ve basically built artificial worlds of passivity and normalcy around them, while their past deeds, no matter how innocuous the intent, remain on the outside, to be utilized by others to stir up trouble.

With most of Mikado’s allies busy with their own issues, I wonder who if anyone will swoop in to help him, or if if he’s finally on his own, which is what Aoba seems to want. Masaomi is free, and seems to be restless. Any action risks crossing Izaya, and thus threatening his life with Saki. But can a friend who is never around still be called a friend?