Two episodes in, and I regret to report that AC just isn’t my cup of tea. This time, I followed Nagisa’s lead and took notes, listing the pros and cons as the show exhibited them. I came to the general conclusion that while show looks great and has its moments, too often it either feels tonally confused or overly sincere. It’s also too cloying, and a little too self-aware and proud of itself. 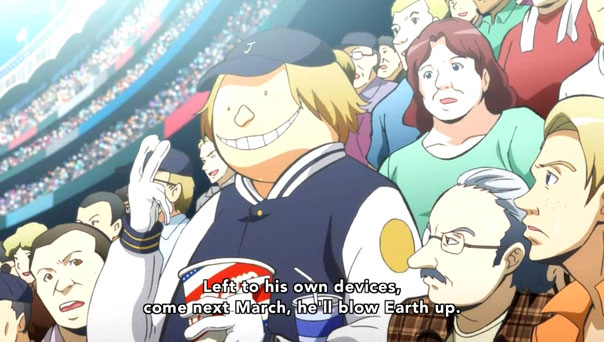 It starts with an unironically cheesy OP that deflates world-and-pride-saving stakes that we’ve never been able to buy. As sensitive and detail-oriented as Koro-sensei is (and do love how he can travel to the ends of the earth on a whim), his desire to destroy the world makes no sense, and not of the ‘Haha, that’s so kooky!’ kind, but a willfully abstruce kind. 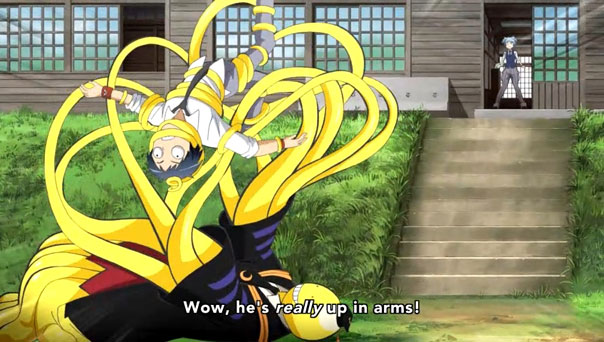 The episode is peppered with silly situations and jokes, but many simply clank to the ground in failure, undermining the ones that hit. I personally don’t mind that Nagisa is a boy despite looking and sounding nothing like one in the traditional anime sense; it’s his tired narration and both his and the show’s tendency to repeat itself that grates. Yes, I understand, you’re killers whose target is a teacher. Except he’s a yellow monster and thus engenders zero sympathy.

The class seems poised to go through a Wile E. Coyote-style process for attempting to assassinate Koro: try something once, and when it fails, never try again. But unlike Mr. Coyote’s target, Koro uses the attempt as an excuse to help the baseball kid adjust his mechanics to better suit his body type. This kid, like everyone in Class E, all have innate talents that Koro will likely help them identify and cultivate 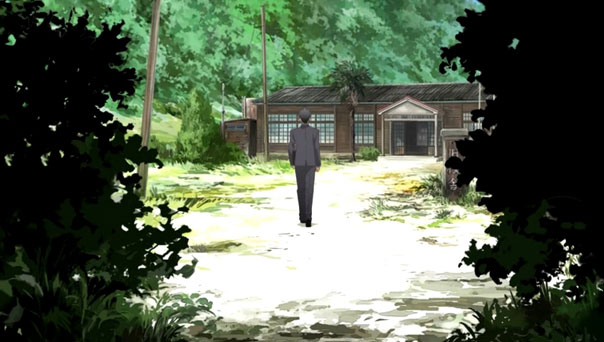 That brings us to the plight of Class E, the “End Class”, a relatively small group of students who are exiled to the dingy satellite campus and treated like dirt in order to make the majority of students work harder, as well as pump up their own collective sense of superiority. This is not that far off from the way this works in the real world; privileged kids are warned that if they don’t work hard and excel, they’ll end up in some crap school and get a crap job and live crap lives.

This social commentary baked into this show is not entirely without promise, but in such an otherwise zany and irreverent setting and such a blatantly nonsensical premise, that serious stuff only contributes to the show’s confused tone and ‘kitchen sink’ approach to storytelling. Nagisa’s narrated analysis of Koro and some cheesy guitar music don’t change the fact that I can’t care about a silly yellow tentacle monster. 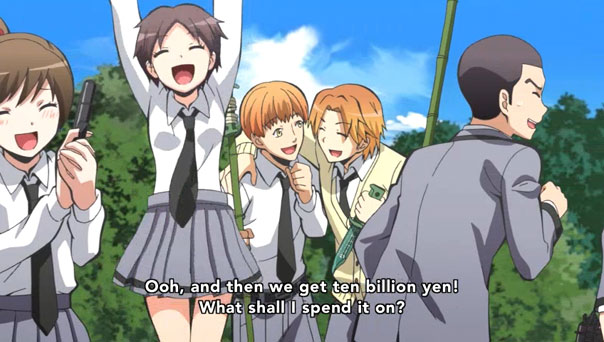 There was once sequence I enjoyed despite these flaws, however: after failing to pile on top of Koro and stab him to death, Koro decides to be clever and replace all of their “anti-me” knives with tulips. Only problem is, those were tulips they all worked hard to plant and nuture.

Realizing his mistake, he blasts off at Mach 20 to procure more bulbs and proceeds to plant them, not at Mach 20, because he’s under the watchful gaze of the angered students. It’s a nice reversal of dominance.

But then I realize…what the hell does he care about planting tulips or telling the baseball kid to “train well and surpass his idol” when he’s going to destroy the world? A couple students jokingly point out this contradiction, but that doesn’t allay my frustration. Even if Koro had a proper human form, his actions and motivations are as muddled as the show’s tone.

More than anything though, the periodic Nagisa narration, as well many of the students’ reactions to Koro, are simply trying too hard, constantly rubbing our noses in its somewhat-forced ‘craziness’, shouting “OMG, we have to kill our teacher, isn’t this so deliciously loony? Well, isn’t it?!”

Actually, no, it isn’t, at least not satisfyingly so. It’s a jumbled mess of tones and themes, over-stuffed with anonymous characters. It’s a show that wants so badly to be so many different things—and never lets you forget it—but its visual polish and genuine enthusiasm can’t mask its inherent gutlessness.