With only a week until the big gala concert, Kousei is having trouble with the piece Kaori is making him play: Fritz Kreisler’s “Love’s Sorrow”, a piece he has vivid memories of his (healthy) mother playing as he napped under the piano or hummed as a lullaby. Practically any other piece would have been easier for him to pick up.

Hiroko tells him not to brood about the fact he’s guilty about trying to forget about Saki. She also suspects he can’t hear the notes because they’re being drowned out by all the powerful emotions and memories stewing within him, that he has yet to figure out how to use to his advantage. It’s a gift, not a curse. Use it.

This episode is replete with the joy and sorrow of love, starting with Hiroko’s insistence Kousei’s mom was proud of him. In that moment, his mother felt the joy of watching her son grow up, and the sorrow of watching him drift away, of ‘leaving the nest’.

Kousei also experiences the joy of his love for Kaori, as they bicker incessantly in between practices, then ride home on his bike under a starry Summer sky. The brief pause between the last episode and this gave me some time to ponder whether Kaori has been Kousei’s Manic Pixie Dream Girl so far. Consider:

Of course, as soon as those points are listed, one can start to punch holes in them. She’s not ‘completely’ available nor only ‘for’ Kousei, but ostensibly Ryouta’s girl, even though the connection between those two mostly centers on the fact they’re both attractive. Secondly, we have seen Kaori struggle, and use Kaori as a means for her to push forward with her music, even if she’s not pushing forward anywhere else in her life. She flat-out tells Kashiwagi she’s not thinking about her future, though that could also be due to her health.

Third, we finally meet Kaori’s folks, and they’re awesome! Turns out they’re longtime fans of Kousei too, and stoked to meet him and stuff him with pastries. He impresses them with his manners (as they probably assumed he was still the awkward automaton of his earlier years), to the point where they may be looking at him as a potential match for their Kaori.

Meeting the Parents is a big step in a relationship, so it’s a bit disappointing when the gang assembles at the school pool to play with fireworks, Kousei sees Kaori with Ryouta and starts to recede into Friend A territory. Dude, she’s clearly interested in you on a far deeper level than Ryouta, and Ryouta has given you his blessing. Man the fuck up. 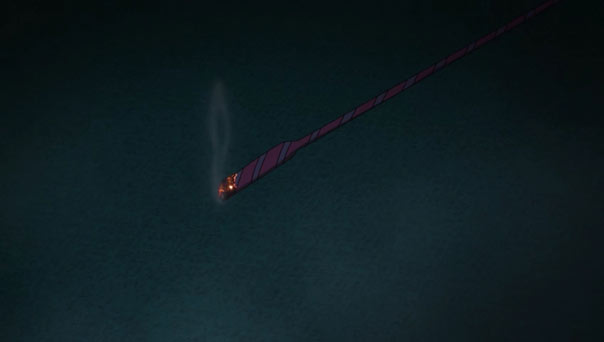 Kousei doesn’t have time to be worried about crap like this, even if he isn’t as aware of it as we are, having heard Kaori’s internal monologue about her not always being around. As if to punctuate that point, her dazzling sparkler suddenly goes out. Kaori is that sparkler. Her supply of fuel is not limitless.

Tsubaki notices Kousei staring at the perfect couple, gets jealous, and launches a bottle rocket attack, sending Ryouta and Kousei into the pool. It turns out to be a boon for Kousei because here, in an approximation of the deep dark sea where he’s always ended up during performances, and with Hiroko’s advice in mind he figures things out. He’s technically proficient enough to not hear the notes, so why try? Instead, channel his memories of the music and feel it, and he should do fine. Probably!

He’s underwater a bit too long though, and ends up losing consciousness. Ryouta brings him back, but Tsubaki reverts to Little Kid Childhood Friend Mode and cries with worry. I love how Tsubaki cannot hold in her love and responsibility for the kid who seemed lost for so long, even if he’s found a new muse in the present. And while she gets along fine with Kaori, she clearly can’t stand the fact that Kaori has come between her and the boy she can’t help but love above all others.

On the big day of the gala concert, Emi attempts to attend incognito, but her instructor outs her. Emi reacts by denying she’s there to hear Kousei, even though she’s definitely there to hear Kousei. What kind of behavior is this, again? Ah yes..tsundere behavior. Even so, I’ve become so fond of Emi (and her seiyu Hayami Saori) so much that I don’t mind her at all as the third love interest. Emi has musical connection with Kousei that Tsubaki doesn’t, and the show has made it plain that we shouldn’t expect Kaori to be around forever.

Indeed, Kaori totally flakes out on the concert! Her phone rings off the hook in her room, and her parents’ pastry shop appears to be closed, which is a bad sign; more a ‘Kaori has been hospitalized again’ sign than a ‘Kaori overslept’ sign. Sure, there’s every possibility this was meant to be another test for Kousei, but I can’t help but fear something out of Kaori’s control is respoinsible for her absence. 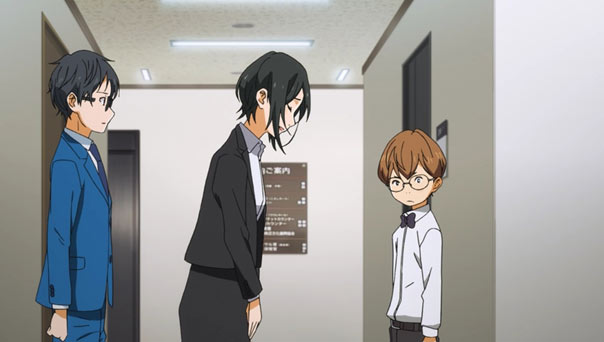 Hiroko tries to get an arrogant little punk of a kid to move his performance up so Kousei and Kaori can play last, but he refuses, having heard all the buzz about Kaori in the lobby and philosophically opposed to her style of play. This concert his his moment of triumph, and he doesn’t let Kousei forget it.

Kousei and Kaori’s playing time arrives, and Kaori is not there, so Kousei has to make another unprecedented move that outrages the conservative judge (even though there is no judging at gala concerts) by daring to play the piece alone. Kousei’s worries about Kaori flaking out on him and not being able to do it without her was replaced by pride and determination, thanks in no small part to that prodigy jerk’s little tirade. Worrying about why Kaori is pointless; she’s not there. The show must go on anyway.