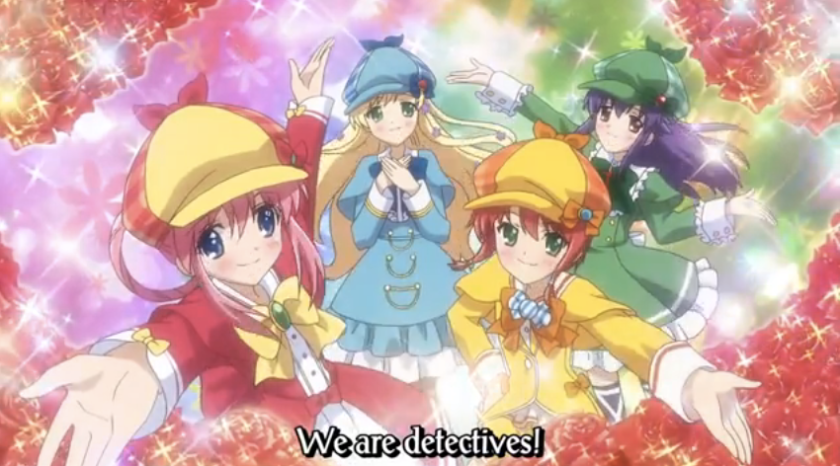 Following the era of detectives and thieves, there is an era of Idols. However, someone is using Toys to steal the voices of Idols and it’s up to the four detective girls to solve the case and get back the voices and I nearly chewed off my own tongue in desperation as I sat through the first episode!

Lots of cute, flustered, arm-flailing little girls solving a magical crime with weird figurine-like-puppets ensues. Some of the visual humor works very well. Some of the cutsey-girl dialogue is cliched and painful. You should earn an achievement for sitting through the whole thing.

You may like this if: you liked Magic Kaito 1412 or, more likely, its kiddied-down alternative Kaito Joker. This is safe, cute girl humor, with all the arm-flailing and sweat-flinging associated with that genre. Jokes like slamming the girls flat in the doorway or characters fighting for screen space when put into split screen view are honestly charming and the general production quality is good.

You may not if you find eye-bleedingly sweet nonsensical magic-girls-as-detectives and all the tropes of cute-or-die shows a little unpleasant to sit through, there’s not really anything special here. If anything, Milky’s above-average production quality and frenetic pace (and content density) will work against you.

My first impression was to gouge out my own eyes with the nearest object i could reach. Thankfully, this was a couch pillow. So the damage was minimal.

Where I shrugged off Kaito Joker or Tribe Cool Crew for being ‘not my age demographic’  last season, Milky Holmes is less ‘too young’ and more ‘horrifically saccharine.’

Maybe Preston should give this one a look? As always, comments below but it’s very unlikely Milky Holmes will survive its face off at the end of the week.

Military! is a 180-second format slapstick comedy about the son of a low-level businessman who’s accidentally ended up leading a country’s counter attack as a mercenary…due to an error in paperwork. This son is now as screwed as his balding dad, as the enemy country is not only out to kill him, but his new ‘bodyguards’ are bumbling, gun-happy little girls.

There’s a surprising amount of content hammered into the opening episode and, while it definitely feels like a slice out of a larger episode (a common problem for minis) everything worked well enough. If anything, it whetted my palate for a longer format version of the show…

You may enjoy it: if you like over-the-top humor, brazen pantyshots, and gun-otaku weapon-tech exposition. Compared to last season’s Orenchi and Otaku Husband, Military! features a fair amount of action and decent visuals. It’s stylized and simple, but much richer than most minis I’ve seen.

You may want to skip it: if you want it to go anywhere. Minis are notorious for their ‘single episode stretched out over a season’ approach to storytelling and Military! shows no signs of being different. Also, over-the-top humor can be hit-or-miss. It hit this week but it could bomb next. My first impression of Military! was positive. It was quick without feeling rushed and the introduction of the setting (as a wacky place) and the four immediate characters was efficient without losing a sense of specificness.

Sure, the characters are your typical over-the-top archetypes: a shy girl who ends up flaunting the most skin, an overly eager girl who shoots everything, a boy who doesn’t belong in the world, and a bumbling dad who will send his son new characters to play with each week. It’s all stuff we’ve seen before but it has good energy.

If you’ve got three minutes to blow, give it a watch and let me know what you think in the comments below!

Suzuha’s feeble attempt to distract Mr. Braun results in Okarin getting punched, but all is not lost: Okarin discovers the lifter the phone microwave is using: the 42″ CRT in the store. And while Kurisu is still against sending physical objects to the past (they’ll only turn into goo), she thinks she’s cracked a way to send people’s memories.

It involves her showing the other lab members an issue of SCIENCY magazine (and boy how I wish a magazine with such an amazing name existed) with her damn picture on the cover, and explaining how a kind of “time leap” (not travel) could be accomplished by translating nerve pulse signals to electrical signals. Lest we forget, Kurisu is very, very smart.

But I also appreciated how Mayushii doesn’t simply fail to immediately understand the concept because she’s dumb or slow. She’s more hung up on the why than the how. Sure, scientists will ‘climb mountains’ simply because the mountains are there; but Mayushii has a very different, very Mayushii take on it: that if she sent her memory of the conversation she’s having with Okarin back to herself, only she would remember that memory. And to her, that’s scary and sad; it speaks to her fear of Okarin ‘leaving’ her.

During their errands, Okarin and Mayushii run into Moeka again, but she too seems put off by the lab’s newest goal, and they part ways. They also encounter a still midriff-baring Suzuha, who has brought Mr. Braun’s adorable little daughter to apologize on her dad’s behalf. And then Suzuha mentions in passing that Kurisu is working for SERN. Whaaaaa?

When he gets the jump on Kurisu lurking on @channel, he dismisses, or at least sets aside the accusation—how could such an open book be trusted with espionage?—but I’m not as quick to shrug Suzuha’s words off. Suzuha seems to know more than any other lab member what’s going on, or possibly what will go on. Maybe she meant to say Kurisu will work for SERN, or worked for them in a previous world line?

Never mind all that, though…it’s time for another Intimate Okarin+Kurisu Talk in the Dark®; in which Kurisu lays bare her the reason for her hesitation in building the time leap machine. That heated phone call was with her estranged father, a fellow scientist, who has come to hate her, not just because she surpassed him before puberty, but because he’s certain she pities him for it.

She fears the time leap technology will only drive him further insane, even though her scientist instincts will probably press on anyway. She’s looking for validation and support, and Okarin eventually provides it, agreeing to accompany her in an attempt to reconcile with her dad.

It can’t be said enough: these two are the best part of this show, and considering all the other excellent stuff going on around them, that’s saying something. But theirs is a topsy-turvy romance, so as soon as they’re out of the moonlight and under the fluorescent lights of the lab, they’re once again bickering like an old married couple. And hey, I sympathized with Okarin: it sure looked like “Makise” was the brand name of the pudding, rather than a hand-written label.

Perhaps eager to stay close to Okarin, Mayushii arrives fully-loaded for a cosplay-making sleepover, and I’m sure she’s disheartened by the fact Okarin and Kurisu are so invested in their lover’s quarrel she has to say “maybe I should go” before they realize they’re being rude—cruel, even—and stop.

Speaking of cruel, this show can certainly be that, and fucking sneaky to boot, as Kurisu allows Okarin to stick around that night if he goes shopping for them. While he’s gone they exchange a couple of sweet texts, but the next one is from that anonymous foe, saying “he knows too much” and attaching a picture of bloody doll’s head (or what dearly hope is just a doll).

In any case, Okarin suddenly gets the devastating feeling that something terrible is afoot in the lab, drops his groceries and runs there, in a thrilling sequence employing a different art style that all but certainly portends the very doom he fears…if we hadn’t already seen Kurisu and Mayushii safe and sound, preparing for a bath.

Don’t get be wrong; the sequence still works, in that at one moment while he’s in the dark and silent lab, it feels almost 50/50 something bad has happened. The show is simply too good at exploiting conventions and painting a picture of dread, even if it’s all in Okarin’s head.

Except…it isn’t. This was a false alarm, but the text wasn’t. Real alarm is indicated, a fact driven home when Daru shows up unexpectedly to find that while he’s hacked into SERN’s severs, it could be a two-way street, and SERN could be looking at them. Kurisu can’t even stay mad about Okarin barging in on her and Mayushii naked, because Okarin is still so damned freaked out. It would do him good to let his friends know about these ominous messages; their ignorance of them doesn’t make them any safer.