At this point, Suzu is about as close as you can get to being an FGL member without being one, which might be tricky what with her apparent incompatibility with Kurisu. But as she overhears from the lab’s open window, much of the “round table” is spent figuring out what to name the time-travelling email.

References to other time travel-related media fly, from Back to the Future to The Girl Who Leapt Through Time, before Kurisu settles the matter with the short but memorable “D-Mail.”

With the phenomenon thus named, they proceed experimentation, operating under Okarin’s prediction that if the microwave is opened at a specific window of time the D-mails point to, the text and banana will be sent back. And sure enough, it works, depositing the d-mail in pieces to five days ago, and depositing a gel-bana back on the bunch.

It’s the latest among increasingly common examples of one of the simplest answers being the correct one. That it was wrought by Okarin, who prefers to “feel” science rather than show his work, adds credence to his indispensability as the one lab member with the faith—or will—to come to such conclusions.

But as he and Daru hit the store to resupply their food stores, Okarin notices cups of green gelatin, shaking him from his high of victory ordinary life he’s always embellished with the baroque trappings of chuunibyou suddenly isn’t ordinary anymore. Shit is real, and it’s dangerous.

I for one appreciate S;G for maintaining that while Okarin has gotten by through various means outside of his control, he still doesn’t have any control. He may well be in over his head, and he knows it.

What he doesn’t quite know is who Kiryuu Moeka is and why she insists on texting him so persistently. I love how she even tries to communicate with him in person through texts, and is crestfallen to learn his cell phone isn’t on him (but of course it isn’t enough for him to say, ‘it’s not on me’, he has to mention ‘it’s being used for a history-making experiment’. I also like how Moeka pretends Daru isn’t there, which is the proper response to someone looking you up and down.

While Daru was leering at Moeka and Okarin was wigging out over green jello, prodigal perverted genius girl Kurisu was continuing the experiments, which leads Tennouji to complain about the intense vibrations. Okarin appeases him for the time being, but Kurisu already has the jist of the D-mail process, including the fact that one second on the microwave timer equals one hour back in time. Her work here makes me glad someone in the lab has the diligence and the attention span to…do the work.

Okarin celebrates the occasion with another grand declaration that is in no way shape for form accurate (they weren’t the first to develop time machine, and they didn’t ‘develop’ it so much as ‘stumble upon it’). But it seems again like the general putting on a brave face in order to maintain morale.

The fear and doubt he’s hiding manifests in a bizarre dream that is equal parts disturbing and cryptically informative. A voice from the event horizon of a black hole urges him to look forward, not back, and ‘reach the end.’

He awakes to a one-sided text conversation by Moeka on his phone that is still in progress, right up to the point he’s able to open his door after she sends a text saying she’s about to knock, but before she actually knocks, requesting to see the 5100. 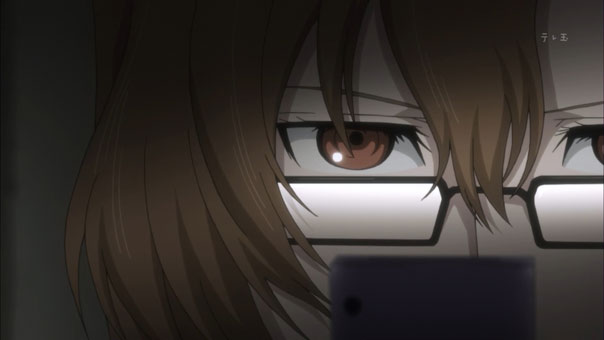 Her explanation that texting is easier for her than talking seems to hold water, as her texts are a lot more expressive. This idea of such an expressive personality hiding behind a stoic, taciturn mask, yet asserting itself digitally, is highly intriguing. Moeka is the type who believes the proper combo of emoji will be enough to convince Okarin to lend her the 5100.

It’s also a lot of fun to watch Daru, Mayushii and Kurisu arrive at the lab one by one and immediately start talking about their top-secret time machine. It’s not particularly irresponsible behavior on the part of the three, just an overabundance of casualness that comes from a group gelling (no pun intended) nicely in a short time.

But that also means Okarin has to bring Moeka into the fold as Member #005. I like the choice, sudden that it is, but one of these days, someone is going to hear too much who isn’t so harmless. And that’s assuming Moeka is harmless.

Kurisu has brought scientific discipline to the operation which is key, but someone will eventually have to be thinking about security, beyond recruiting anyone within earshot. I just hope they don’t think about it too late.